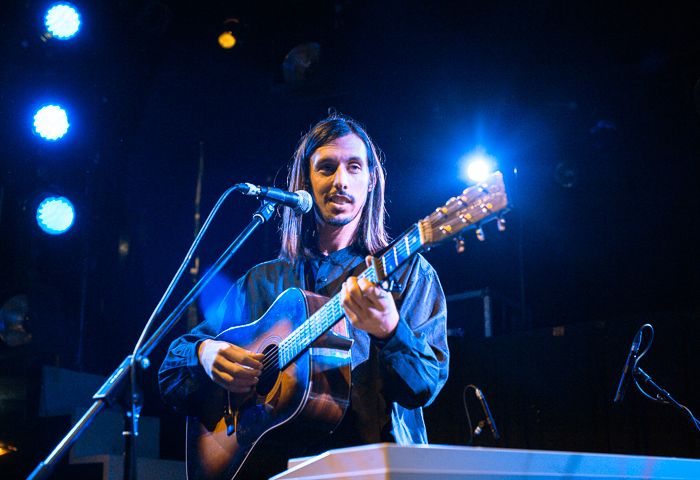 With his cool charisma and a growing live reputation, James Canty grabs the attention of Getintothis’ Paddy Clarke.

Somewhere between the twisted, minimalist elegance of Graham Coxon‘s acoustic Spinning Top record a few years ago, the shaggy eloquence of Pete Doherty‘s solo efforts and a smattering of orchestral refinement, the only thing that’s really to dislike about James Canty is that his records come so few and far between.

Sprung from the depths of darkest Essex, now Liverpool-based, he’s been on the local live radar for years now, impressing at every turn. It was with The Antlers that this writer last caught him, altering between solo spots and deft full-band backing for one of Liverpool Music Week‘s most understated stand-outs.

It was the individual approach that really caught our attention, a charismatic and affable set that trod faultlessly between accessibility and intensity, and it’s nothing but a joy that the first taste of his long-awaited return to record should be similarly successful.

The first track to be revealed from his upcoming 12″ Love EP, Putney Bridge pays homage to his London(ish) roots both in name and aesthetic, evoking an Albarn/Davies-esque romanticism in sparse, echoing vocals and an arrestingly minimalist acoustic guitar line.

That it’s a capturing piece is undeniable, but what really elevates Canty beyond mere folk-affability is an injection of utterly moving knife-edge strings, swelling at times to the edges of an infinitesimally deep melancholia that only the best can truly pull off.

It’s a fantastic effort, and completely heartening to see it backed by a long-standing live ability. If the rest of the EP, released this May 4, can hit the same standards, then it’s no overstatement to predict that Liverpool might just have another something special on their hands.