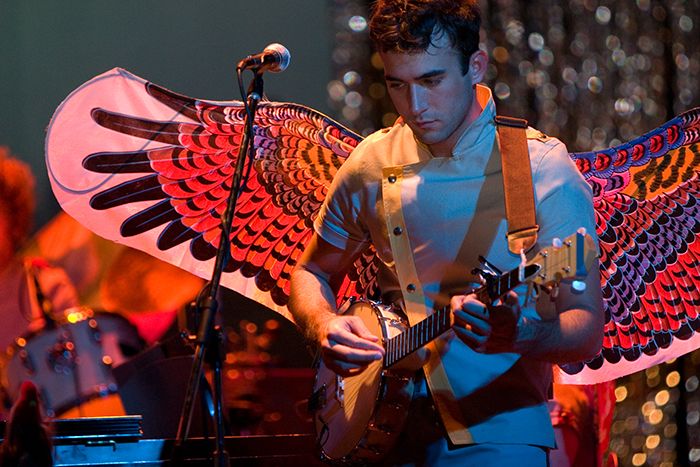 Getintothis’ Chris Burgess oversees one of the strongest Singles Clubs ever, only let down by rubbish European art and one of the worst songs ever heard by man.

Sufjan Stevens: Should Have Known Better – Single of the Week

The Brooklyn-based folk genius (and I use that term advisedly, believe me) has released one of the most delicate and beautiful tracks of the year so far.

Should Have Known Better begins with the usual Stevens fare, introspective and breathy vocals, matched with twiddly-yet-perfect guitar backing, but evolves into a catchy and upbeat melody, almost soaring while still remaining completely alluring.

This is very, very strong week for singles, yet this still stands head and shoulders above the rest.
Should Have Known Better is taken from his upcoming album Carrie & Lowell.

A cryptic, coded new track from the London post-punk legends, Split Your Ends is taken from the band’s self-titled 13th album, released mid-April.

Colin Newman’s ever-distinctive vocals are underpinned with a more rough and ready backing track than on some of their previous work. This is in no way a bad thing though, as the end result is a song that drives along excellently, with a superbly motoring backbeat and ringing guitar chords building to an abrupt end.

Wire play The Kazimier on April 23.

Directed by longtime Björk collaborators – the creative duo Inez & Vinoodh – the new video to Lionsong is a big pile of pretentious Euro-art garbage, as Björk wears a horrible PVC suit and moves her arms around for a bit.

If there’s some deep, hidden meaning behind this video, I fail to see it. It all feels very sub-Eurovision to me.

The song itself is typical Björk weirdness, with spaced out vocals and minimal beats. I guess if you like her, you’ll dig it. If you don’t see what all the fuss is about, then this won’t change your mind.

Death Cab For Cutie: The Ghosts of Beverly Drive

American alt-rockers Death Cab For Cutie release their new album, Kintsugi, at the end of this month, and appears to signal a smart move back towards their earlier material, following 2011’s largely disappointing Codes and Keys.

Kintsugi, for those who might not know, is the Japanese art of fixing broken pottery with gold. An apt metaphor, perhaps?

The fantastic Danish quartet Mew follow up Satellites, the single that announced their return earlier this year, with Water Slides, a gloriously lush soundscape of a song.

After a hiatus of six long years, the band are due to release their forthcoming album +- (that’s Plus Minus) at the end of April.

There’s a lot of imitators of this band around, but Mew show here why they are the real kings of what I guess should be described as dream-prog. Frustratingly this is only an edit of the album track. It’s during the longer songs, such as 2003’s epic Comforting Sounds, that this band really shines.

The rest of the band aren’t bad either, mind. The motown-esque beat paired with fuzzy guitars providing the perfect platform for Quinlan’s growls to stand out.

Soon to playing Sound City, the Jarman brothers have a new album due out – For All My Sisters – and this new track.

Different Angle is more in tune with the earlier Cribs output, featuring a riff Johnny Marr himself would have been proud to have written. Expect this to be playlisted heavily over the next few weeks on the more hip of the radio stations.

The Seattle quartet, on the verge of releasing their second album, Time to Go Home, have offered up this nicely under-produced tune – a distinct evolution from their debut album No Regerts.

The pop-punk has been replaced by a lighter, more mature and melancholy sound, although the band’s DIY spirit has not been diminished.

Circumstance is a thoroughly dark, foreboding and atmospheric track from the Nashville-based Jones.

Nickelback: She Keeps Me Up

Musically, one of the worst songs ever written.

Lyrically, THE worst song ever written.