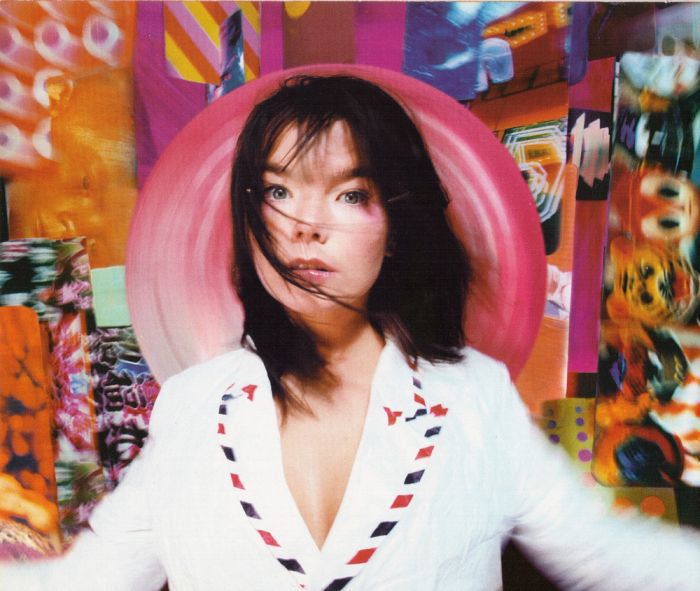 As the internet once again does a remarkable impression of a sieve, another major album leaks into the real world months ahead of schedule. Vulnicura is Bjork’s ninth studio album and tantalisingly features Arca and The Haxan Cloak on production duties. Before the forthcoming rush job of one listen reviews, backlashes and general furore, it seems the perfect time to take a look back at a defining moment in the Icelandic polymath’s ground-breaking beginnings – and most importantly, 20 years on, her third album, Post.

Following a mixed trio of albums in alt-rock band The Sugarcubes and a debut solo album that dipped its toe in techno and the wider dance music spectrum of the time, Post was a real mission statement that set the ball rolling for her career.

It can be difficult now to imagine a musical landscape uninhabited by Bjork. Such is her astronomical fame that even our grandma knows her name. Whether known as a quirky character, pop squealer or a genuinely special artist, her ‘household name’ status is truly remarkable when you consider her lack of genuine radio friendly hits throughout a three decades and counting career.

Of course it would be remiss to not attribute a fair chunk of this commercial success to the uncharacteristically poppy crossover It’s Oh So Quiet, which catapulted her to living rooms across the world with its big band bombast. No doubt the success of this song brought with it that all important time and financial credibility needed to further build her career. Celebrating its 20th anniversary this February, this wilfully unique piece of work is long overdue a new airing. Join us for the ride.

Opener Army Of Me crashes into existence with a driving synth line that never lets up. ‘If you complain once more, you’ll meet an army of me’ is brutally confrontational, much like her now famous portrait album covers in which she often stares down the lens. As first songs go, it’s a no nonsense statement: I’m in charge. Now listen.

Once the ground rules have been laid down, the way is perfectly paved for Hyperballad to spread its considerable wings. Building slowly from a lyric that evokes the sublime nature of her homeland, it gradually flourishes into a classic techno banger. Just two tracks in and we have the blueprint for the album. A polarising duality that’s equal parts relentless and beautiful. Pay attention and you shall be rewarded tenfold.

The Modern Things affords the opportunity to explore escapism as she paints a vivid picture of an alternate historical timeline in which technology has always existed, just waiting to be found. The wide-eyed children’s tale lyrics are matched by a theatrical score that develops into a bold brassy finale.

If Army Of Me is an outward facing statement, then Enjoy is it’s existential twin, employing the same groove-based techno principles across a lament about the vices of a metropolis.

Maintaining the loud quiet ebb and flow of the album, You’ve Been Flirting Again leaves us after just 2:30, denying the listener a crescendo in which to delve but ultimately leaving us wanting more.

Out of these sombre tones grows the musky, Eastern-tinged Isabel. It’s here that her willingness to embrace collaboration becomes apparent, utilising lyrics by poet Sjon and string arrangements by Eumir Deodato. The song lifts into a lush middle section that manages to rest just to the right side of a James Bond theme.

Opening with a stolen telephone sample and layering up with a melancholy synth line that wouldn’t be out of place on Aphex Twin’s Selected Ambient Works II, Possibly Maybe is Bjork at her most beautiful, making exquisite use of negative space and allowing her voice to pursue its full register with just the right amount of gusto. It’s a wallowing breakup song in the best possible way.

Flipping the traditional as she is wan to do, I Miss You laments a future love that she’s yet to meet. The song soon takes a sideways leap into a South American carnival section full of chirping brass and street parade vibes. It’s silly and funky and fun.

Cover Me moves like a dream sequence from Alice In Wonderland with the line ‘I’m going to prove the impossible exists’ before progressing into a dark and discordant synth workout that sounds like it’s being played in a cave.

Headphones pre-dates Thom Yorke’s Cymbal Rush by a decade, delicately balancing soft pads with submerged drum sounds to form a sub-aquatic canvas for her scat-inflected vocal play. It closes the album unceremoniously but with stately gravitas.

The importance of Bjork as an artist has been, and will be, discussed at length, and with heartfelt profundity from writers with far greater linguistic depth than us. Hence the simple focus of this piece. Sometimes stripping away the context, lineage and future relevance (perceived or otherwise), is the most vital tool we have with which to appreciate a piece of work. Blocking out the surrounding noise and opening up a direct communication with the artist can be the most valuable of experiences. With that in mind I’ll leave you with a verse from Headphones.

“Sounds go through the muscles,

They start off cells that haven’t been touched before.

These cells are virgins”.