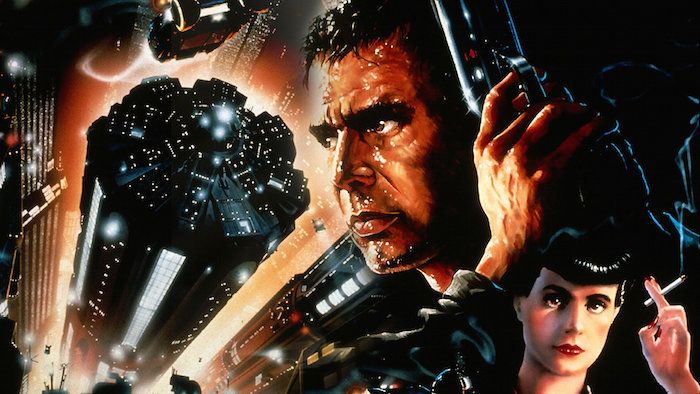 With the iconic Blade Runner screening at FACT Picturehouse this week, Getintothis’ Ash Turner explores Vangelis’ landmark score of the film.
With Blade Runner, Ridley Scott’s incredible film adaptation of Philip K Dick’s classic 1968 sci-fi novel Do Androids Dream of Electric Sheep about to enter its 33rd year since release, it’s impossible to ignore the one of a kind accompanying score that arguably raised the bar for original cinematic composition in science fiction.
When the wondrously gifted and infamously reclusive Greek composer Vangelis was approached and tasked with composing the score for Blade Runner he was already in an excellent position, having achieved prestigious acclaim for his previous studio albums Opera Sauvage and China as well as working on Carl Sagan’s Cosmos and being touted at the time for an Oscar for his work on Chariots of Fire.
For so long, the enigmatic connection between film and score has been bound tightly, the hint of a certain theme or motif thrusting memorable images and scenes into mind. Who can hear the ominous brass tones of Star Wars‘ Imperial March motif and not feel the tingling tension of lingering evil or the lonely trumpet calls and violins of the Godfather’s main title without recalling the upcoming drama of the Mafia classic?
That being said however, from the first few moments of Vangelis‘ score for Blade Runner the overt nature of the distinct motif has been put aside for something far more dynamic and reactionary. For Vangelis it seems clear that the Blade Runner score was to be more of an integral and synergistic expression of the visual presentation. That is to say Vangelis‘ score served not as background music, simply filling out a sonically sparse scene or introducing simple motifs, but to enhance the impossible architectures and storyscapes depicted  on screen with a truly tailored aural expression.
While reserved on the application of thematic motifs or musical reprieves, Blade Runner’s score is still littered with melodies which, though isolated are instantly synonymous with certain aspects of the film, serving to fill in the unspoken blanks. A great example perhaps would be Demis Roussos’ wonderfully emotive vocal melodies featured in Rachel’s Song, serving to display the impossibility of the subtextual sadness and sensuality expressed by a machine.
Unable to read or write music, Vangelis’ approach to scoring for films seems more a matter of instinct, turning immediately to his ever ready synthesisers after watching the film on a video screen in his studio and translating his initial emotional impulse into a musical reaction to the visual stimuli.
While it’s not difficult to remember the nonsensical theremin warblings of alien life represented throughout the 50s and beyond, electronic synthesis has always stood as a staple tool capable of delivering some of the most unique sounds. Around the time Vangelis was tasked with composing Blade Runner’s score, there were several emerging breakthroughs in electronic synthesis such as the  much improved analogue FM synthesis and new digital sampling synthesis. The latter being a much used tool in film since its inception and beyond, allowing the sampling of acoustic instruments, vocals and more to be mutated electronically while still preserving some of the unique qualities and timbres of the original sound.
Vangelis worked for weeks to perfect the score, ensuring a harmonic partnership with the visual power of the film was achieved in an organic manner. This resulted in a landmark score which conveyed the fantastic landscapes and retrofuturist encounters in a near transparent manner previously unheard.
While original scoring is still reasonably widespread, many modern compositions strike us as somewhat hollow and sensationalist en masse, with only a handful of composers managing to compliment the visual impact of film without imparting a disengaging schism between film and score.
It stands to be said then, that with the modern blockbuster selling out somewhat to the market’s agenda by supplying the biggest hit from whoever is “it” right now to act as their musical centrepiece for any given scene, or failing to do better than the almost inevitable chunk of dubstep or electronica while the credits roll; could the days of the great film composer be numbered, only to be irked slowly out of place by ill-fitting crowd pleasers?
Blade Runner is screening at FACT until April 9.