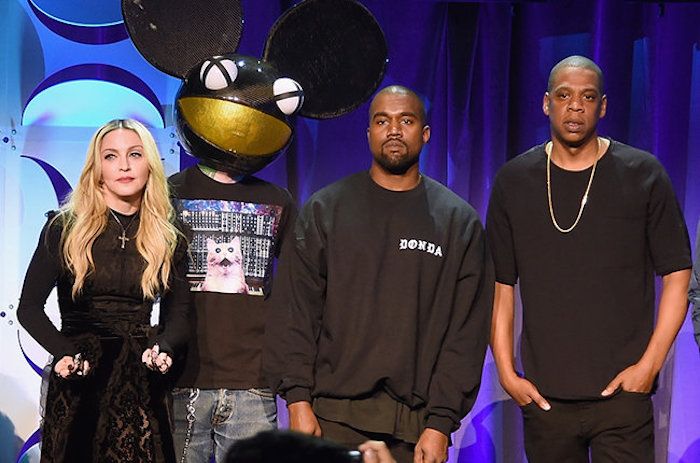 As Jay Z and other star stakeholders officially launch their controversial new music streaming service, Getintothis’ Dirk Gently has been keeping abreast, so you don’t have to.

The music industry. Monopolised by a very small number of people who own a very large amount of money. They invest a lot of that money into publicising the product, which influences people to buy it, and two things happen – certain musical styles become popular and are mass-produced, while some artists from less fashionable genres become more like the ‘in’ sound in order to sell records.

Yes, this is a narrow-minded, biased viewpoint looking at a very specific part of the industry, but when we’re not wearing our journalist hats, we are frequently narrow-minded and biased about the state of music. Major labels account for a sizeable chunk of the money people spend on music. Is it an art form, or just product for cash?  If the answer is the latter, then creating that product can be a slippery slope towards the aural equivalent of gruel.

On March 30, a small group of people who posses a very large amount of money started a rival business model.  Does that sound familiar? The difference this time is that they are all artists. Seriously wealthy artists, but still, that still makes a difference. Doesn’t it? Kanye West says this is ‘the beginning of a new world’; Jay Z thinks it will change the course of history. Forgive us for being sceptical.

Tidal is currently a ‘High-Quality’ music streaming service, but seems to have aspirations for bigger things in the future. For the princely sum of £19.99 a month you get CD-quality streaming, offline access and so on, with the added bonus of Tidal-exclusive content from artists. Now that sounds like a fair whack, but one of the key motivators for this move is to place a value on music that has been eroded by free access from platforms such as Spotify.

We won’t argue that the Spotify model is brilliant when it comes to getting pennies in the moth-eaten wallet of the small artist. Similarly with established acts; Taylor Swift withdrew her catalogue from Spotify last year due to the ridiculously small amount of money she was earning . Thom Yorke did likewise, while Beck noted that Spotify doesn’t even cover paying “…the musicians playing with me or the people working on the discs.”

Good point, but let’s look at the people making the discs. Spotify isn’t hoarding all those subscription fees. Like any other legitimate business, it has to pay the man. The man in this instance is the record company. 70% of the money from subscriptions and advertising goes to the labels. Royalty payments to the label, who then take their cut before it gets to the artist.

That is the issue. Big labels own the music, and often have publishing deals which include a percentage of mechanical and performance royalties as well. Whether it is CD, vinyl, iTunes or streaming, the majority of cash goes to the label. It would appear that the artists who own Tidal, all of whom have deals with major labels, may be barking up the wrong tree. The internet should be a way to bypass all of the middle men, and perhaps Tidal is the first model that make that a reality, but only time will tell whether people are convinced.

So. The press conference. Possibly the most painful thing to hit the internet since The Voice covered Beautiful Day. A talking head from Tidal gleefully introduced the artists: “Every great movement has been started by a few, brave people, who band together for a common cause.” Move over, Rosa Parks, Jay Z wants to get PAID.

There is lot of clapping and strained smiles as, one by one, the evil masterminds are unveiled.  It’s like a real-life South Park episode. Arcade Fire, Beyonce, Daft Punk, Jack White, Jason Aldean etc. saunter out. Chris Martin and Calvin Harris had to come via skype and look bored throughout. They smile and nod, surreptitiously watching the clock. Chris is on holiday; he doesn’t want to be doing this.

Alicia Keys’ rambling keynote speech reaches Mark E Smith levels of incomprehensibility, but eventually she stops making noises like ‘Wooow’ with her mouth. She gets quotes from Jimi Hendrix and Freidrich Nietzsche in there, but it all feels a bit like nobody really knows what is going on.

Madonna doesn’t have an easy time of it. She starts strongly with a walk on stage and a demure smile, but immediately falls foul of Deadmau5. Don’t try and shake his hand, woman, he’s wearing a helmet. Too late, he can’t see, she is left hanging but turns it into a cool hug. She’s not done yet. When it is her turn to sign Tidal’s ‘Declaration’, she evidently feels the need to out-sexy Nicki Minaj and Rihanna. An embattled Madge levers a leg onto the podium, (gently, as if her knees are giving her gip) to sign the page with a flourish. We do not get told what their declaration actually declares.

The accompanying promo video is suitably self-congratulatory. Chris Martin hugs Calvin Harris in the sunshine, Daft Punk (helmeted, no straws…) clink champagne glasses with Jay Z in some extravagant mansion. Perhaps he gave them straws when the cameras cut. Good God, it almost brings a tear to the eye that these artists aren’t getting paid enough. In terms of emotional persuasion, it’s hardly a compelling argument.

On the other hand, the freedom that Tidal offers to an artist is an attractive prospect. There seems to be facility for greater interaction with fans, and a wider range of creative product that Tidal can provide. In an interview for Billboard, Jay Z makes a more compelling argument for the service:

At the moment, the artist is low in the pecking order in the majority of major label deals. This is stifling a lot of talent that deserves to be heard. Any new platform that tries to champion an artist’s right to make a living should be applauded, and we hope this proves to be the case with Tidal. The service will pay money to big artists in return for exclusive content, but whether it will have any positive impact on smaller musicians is yet to be seen. The music industry, after all, is a shady place.

In the spirits of investigative journalism, and in the hopes of Tidal’s claims of a better deal for artists being true, Getintothis contacted them to find out more, after reading through the FAQs and other information on the site. We didn’t ask for a breakdown of their whole business model, just a little more info on how this service intends to renumerate artists for their music.

Three weeks later, and in receipt of only one deeply unhelpful stock email which redirected us to the FAQ, we are none the wiser. Moreover, the saviour of the music industry has dropped out of the top seven hundred US iPhone apps whereas on April 20, Pandora and Spotify occupied positions 3 and 4 on the chart, respectively. In the UK Tidal has sunk below 500 in the iOS and Google Play store charts. Despite the glitzy launch, and fan appeals from numerous stakeholder-artists, punters aren’t exactly running to join the barricades.

Sadly, it appears that Tidal’s revolution may yet turn out to be a disappointing bubble of hot air, a great idea that was launched in an unbelievably out-of-touch manner. We support any platform that aims to promote the value of music and safeguard the livelihood of artists, but millionaire megastars are not the faces you want fronting that campaign. As Deathcab for Cutie frontman Wayne Gibbard recently noted in interview:

“There was a wonderful opportunity squandered to highlight what this service would mean for artists who are struggling and to make a plea to people’s hearts and pocketbooks to pay a little more for this service that was going to pay these artists a more reasonable streaming rate, and they didn’t do it. That’s why this thing is going to fail miserably.”

It’s not failed yet though; much of the discussion on the internet and in music press is speculation and opinion over fact.  iTunes wasn’t built in a day, and in a follow-up to his cogent and persuasive Billboard interview, Jay Z has recently taken to Twitter in defense of the platform and in response to his critics. We’ll close with some of his words, and keep our fingers crossed that this lame duck turns into a success.

There are many big companies that are spending millions on a smear campaign. We are not anti-anyone, we are pro-artist & fan. #TidalFacts

Indie artists who want to work directly w/ us keep 100% of their music. “If you don’t want the CEOs all in the videos” haa #tidalfacts

We are human (even Daft Punk ha). We aren’t perfect – but we are determined. #TidalFacts

We are here for the long haul. Please give us a chance to grow & get better. #TidalFacts