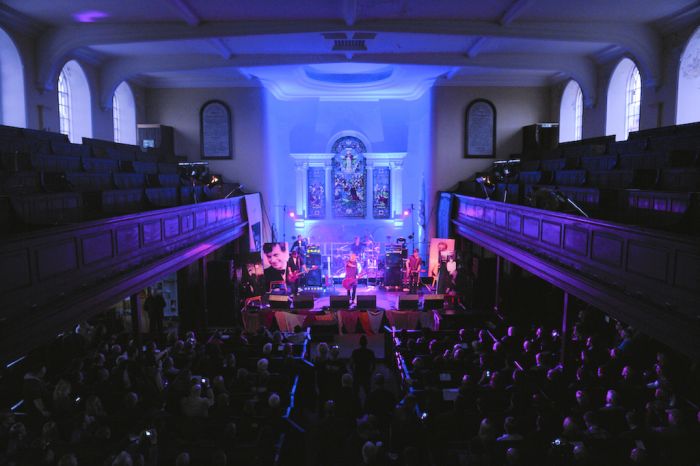 With news that Peter Hook is to play the entire Joy Division back catalogue live at a unique concert in Macclesfield church, Getintothis’ Banjo whittles the list down to just 10, but 10 of the best.

Peter Hook & The Light will return to Christ Church, Macclesfield on May 18th, 35 years after the death of Ian Curtis, to perform the complete works of Joy Division.

Hooky and The Light will play every single track ever written and recorded by the band at this unique concert at the beautiful Grade II listed 18th Century place of worship in the centre of the town where the group was founded. The live debut of the full repertoire is bound to be a hugely emotive occasion, especially on such a significant date.

Both the venue and the town hold great resonance for the event. Joy Division used to rehearse regularly at the nearby Talbot Pub in Macclesfield, although they never actually performed live in the town. As is well known, Macclesfield is the hometown of both Ian Curtis and Stephen Morris and, in another coincidence, Christ Church was attended by Ian in his youth.

The first time Joy Division’s music came to be performed live in Macclesfield took place in June 2013 at the Barnaby Festival when The Light were invited to perform Unknown Pleasures and Closer live. So This Is Permanence completes a trilogy of The Light’s special event gigs.

All proceeds from So This Is Permanence will be donated to The Epilepsy Society and The Churches Conservation Trust with the donations earmarked for the redevelopment of Christ Church itself.

Although Hooky won’t be under any set-list pressures come May, we’ve picked our Top Ten Joy Division tracks that those lucky enough to be in attendance will be hearing, without a doubt.

Both sides of New Order’s debut recording were old Joy Division songs and it’s such a shame that only rough recordings exist of Curtis singing this. It has been said that Joy Division would have got into synths the same way New Order did, and they were clearly heading in that direction. However, in Curtis they had, and they lost, one of the best lyricists of his generation.

We will never know what a third Joy Division album would have sounded like, they remain forever frozen in amber, but their small collection of records carry on, still attracting new fans and still being talked about all these years later.

Another song where Steve Morris shines on the drums and Barney’s guitar synth produces something that is almost, but not quite, a tune. The difference between their two albums is stunning, especially when you realise how short the time difference between the two recordings is. It is hard to agree a creative peak for them, partly due to their short existence, but also for the sheer quality of their recorded output.

As the opening track on Unknown Pleasures, this was the first Joy Division song many people heard, and it sets out their stall perfectly. All credit to Martin Hannett’s production here too, recording the sound of lifts and breaking glass as found sounds to include into their songs. The drum sounds on Unknown Pleasures have yet to be bettered.

Initially released as a limited edition French only 7” single, along with Atmosphere. What other band could afford to almost squander such riches. This song sums up two things; firstly the fact that all instruments were considered equal in Joy Division, with the drums or bass taking as much of the light as guitar and vocals.  Secondly, their bruised grandeur is often imitated, but rarely equalled.

The song that gave us the line perhaps most quoted of Joy Division’s songs – “Here are the young men, the weight on their shoulders”. It’s remarkable to think that before Unknown Pleasures was released, the band were already playing almost all of Closer live. They developed at a furious pace, which is just as well, considering how short their chapter was going to be.

The song John Peel played after he announced that Ian Curtis had been found dead at his home. Again, in hindsight, it is easy to read Curtis’ lyrics as cries for help, confessionals from the soul or heart-on-the-sleeve insights into a troubled mind. At the time however, angst was very much a part of the post punk style and lines such as “a loaded gun can set you free” passed us, and his bandmates, by.

In a way, the thing that set Ian Curtis apart from his peers was that he meant it.  A song of heart-wrenching  majesty.

Another pulsing Hook bass line drives this song as Curtis screams at us to “Dance to the radio”. Perhaps their first classic record and another stand out song from their early gigs.

A shout of “350125 GO!”  starts this song, which turns out to be the prisoner number of one Rudolph Hess. This type of thing was quickly played down, but Joy Division’s early period was notable for two things; an apparent fascination with Nazi-era Germany and for being a whole lot punkier than they’re generally remembered as being. You cannot hear this without being transported back to one of their early, shouty gigs and the glorious noise they made.

Quite simply, their masterpiece. Released after Curtis’ death, it is difficult not to see this song as some kind of elegy. At once mournful and beautiful, Joy Division’s early promise was fully realised on this. The dominance of this in John Peel’s Festive Fifty prompted him to change its format from the best tracks of all time to a yearly best of, as he thought Atmosphere was becoming the next generation’s Stairway to Heaven.

She’s Lost Control is renowned for its haunting bassline and the introduction to Hooky’s trademark style of playing high notes. The song’s lyrics were inspired by Ian Curtis seeing a woman have an epileptic fit in public, sparking a fascination with epilepsy that eerily presaged his own illness. It has been said that the drugs he was prescribed as a result of his epilepsy, or more accurately the depressive side effects, led directly to his suicide, making a troubled song even more chilling.