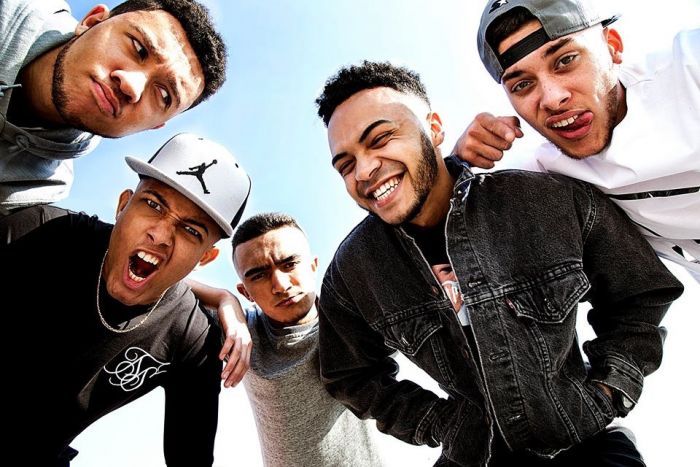 The honour, which represents the best new or emerging music of black origin within the UK, was announced earlier this evening and caps a fine week for the Liverpool pop quintet after releasing their debut cut Tuxedo from their forthcoming EP The Show on May 17.

The band, which consists of Ben Sharples, Kaine Ofoeme, Akia Jones, Delleile Ankrah and Michael Welch, formed in 2011 and were named in Getintothis‘ One’s To Watch list in 2013 while also played at the GIT Award 2013 launch alongside mentor Esco Williams.

Williams, has been a guiding force for the youngsters from the outset helping them hone their craft and develop material – and in a smart twist, he too picked up a MOBO UnSung – the organisation’s first in 2012 – before going on to perform during the 2012 ceremony in Liverpool.

Williams said: “It’s great to see the lads get opportunities and genuine praise – they work crazy hard.
“Milestones like this set them a part.“
With the news X Factor and other reality TV music programmes are seemingly on the wane, Williams suggested it was time for credible artists to reclaim pop and show what genuine talent was out there.
He commented: “Reality TV and corny videos have given the term ‘boyband’ a bad name. MiC LOWRY are a BAND; they’re musicians and vocalists who are highly creative.“

MOBO founder Kanya King, MBE, said: “We are delighted to announce the MOBO UnSung Tour along with the winner of our MOBO UnSung talent competition which provides a platform for emerging talents and promotes them in these crucial initial stages of their musical careers.

“MiC Lowry, both UnSung winners and headlining this year’s Tour, have proved to be worthy champions, yet I also wholeheartedly congratulate all the other contestants for their talent and stepping onto the MOBO ladder.”

Listen to Tuxedo and a new video about their early career below.