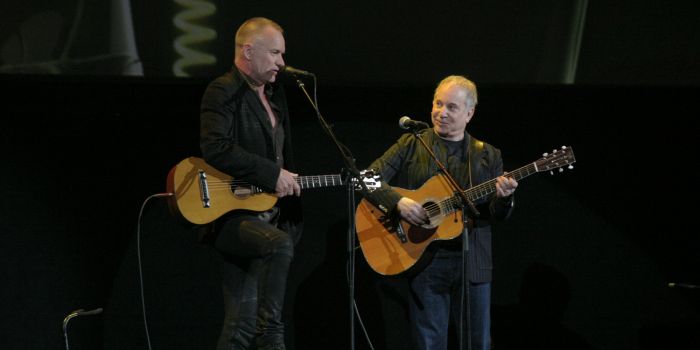 More collaborators than a co-headliners, Getintothis’ Shaun Ponsonby travels to Manchester for three hours with Simon and Gar…Sting.

How many legends does it take to sell out an arena?

We had cheaper tickets that cost £55 up in the Gods. As we arrived we were told we had been relocated; upgraded near the front with tickets that should have cost £125. Sadly, it wasn’t because the staff at the arena are fans of our Cosmic Slop column, it just seems someone decided that if people would pay around £60 to see Paul Simon or Sting, they would pay £125 to see them together. This clearly wasn’t the case, and it left many seats near the front that needed filling. Is it really worth going to see anyone for £125? Probably not. Hopefully, the message will get back to the promoters; stop fucking with us.

That snag aside, this tour is actually an interesting idea. This isn’t a co-headlining show, it’s a collaboration. We don’t watch a set by Sting, have a break, and watch a set by Paul Simon. Instead, the two of them walk onstage together and play a mini-set in duet. Alternating between each other’s songs, they open with Sting’s Brand New Day, followed by Simon’s The Boy in the Bubble, which gave way to Sting’s Fields of Gold, and finished up with Simon’s Mother and Child Reunion (which was a pretty obvious Simon song to feature Sting, given how it mirrors the latter’s reggae influences).

It was actually quite powerful to have them on stage together, both musically and visually. Taking some of each other’s verses gave each song a different edge, and the sheer number of players on stage – members of each musicians’ regular solo bands – more than filled the arena, giving new colour to songs we thought we knew like the front, back and sides of our hands.

The majority of the night then consisted of the two stars alternating short five or six song sets, before re-joining each other for another duet to act as a transition, usually on Simon & Garfunkel songs such as The Boxer or Mrs Robinson. However, never were they recreations of the original records, with Sting finding his own place in Simon’s body of work.

This was actually pretty astute planning. It means the show continues to flow. The fans of either performer don’t get restless because the sets are only a couple of tunes. Although each naturally fills their set with a selection of their biggest, they also have room for some more recent material and the challenge of playing together likely satisfies the die hard section of the artists’ audience and their own need to keep themselves interested in playing these songs for the billionth time.

It was during the solo sets that the differences between the two performers and audiences became most apparent. Sting’s sets tended to be a lot more high energy. This writer may not be a particular fan of his, but he is by far the more charismatic performer of the two. And, Goddamn, he can still sing. He pretty much sounds exactly as he did with The Police.

Incidentally, it was The Police songs in his set that garnered the biggest reactions, particularly Message In a Bottle and, of course, Roxanne. His fans seemed to be the most vocal, and the ones who really brought the party, seeming to largely consist of 80s chicks.

At one point, Sting paid tribute to his touring partner, stating how all the important moments of our lives have been soundtracked by a Paul Simon song. He followed this up with a touching rendition of Simon & Garfunkel’s America, sans Simon.

Paul Simon, on the other hand, is the subtle troubadour. The poet whose work stands for itself. His audience seemed to react in such a way, applauding with respect and awe when he sings the opening lines of Still Crazy After All These Years or 50 Ways To Leave Your Lover.

Oddly, it’s the American Simon who attempted to connect with the locals more than the British Sting. When he first talks, he regales the audience with his first Northern English performing experience, before Simon & Garfunkel broke and displaying a surprisingly accurate Northern accent.

When he begins his first solo set, he spies the venue staff instructing an elderly-looking lady approaching the stage to go back to her seat. He tells them to leave her and approaches her, touching her hand and whispering in her ear. She respectfully goes back to her seat looking like a kid who just met Santa Claus. “She’s a stalker”, he jokes.

He also slips in a last-minute rendition of Homeward Bound to the surprise of the band and his guitar tech who he told to step back when he came on to switch his guitar around, explaining how he wrote the song at a train station “somewhere around here” (it was actually Widnes) on his first ever UK visit.

At the end of the main set, Simon brought out the big hitters from Graceland; a rapturously received Diamonds on the Soles of Her Shoes and You Can Call Me Al, which undoubtedly received the biggest reaction of the night. The arena exploded into action the very moment that iconic riff began, with dancing in the aisles even way at the back. Everyone should have a song like that.

The encore break was short, seeming only to exist so Simon and Sting could re-enter the stage together, and finish as they began. The party atmosphere created by You Can Call Me Al continued with them trading lines on Cecilia and Every Breath You Take, before ending on a powerful duet of Bridge Over Troubled Water.

As the band left the stage, the two men were handed acoustic guitars and they finished off with The Everly Brothers’ When Will I Be Loved? It was at this moment that the purpose of the collaboration became clear; they just thought it would be fun. And it was. It didn’t feel like it was the brainchild of a suited promoter, it felt like two musicians who happened to find that they enjoyed playing together.

It was a unique event, unlikely to be seen again. And if we do, let’s hope they make it more affordable.