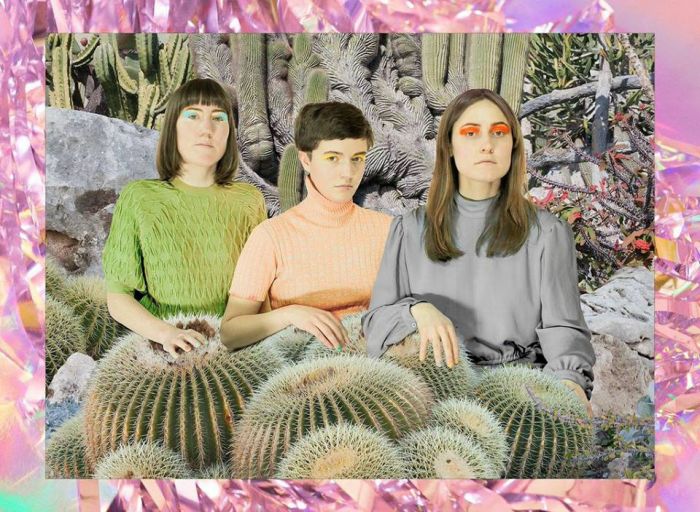 As Stealing Sheep reveal a special live video, Getintothis’ Amelia Ward takes a look at a clip that almost puts her into a hazy, drug-induced dreg.

Stealing Sheep have revealed the live video for the title track of their upcoming album Not Real.

With another juicy morsel of psych-inspired low-fi pop, the band have given us more sub-genres than you can shake a trippy stick at.

The much-anticipated sequel to 2012’s debut Into the Diamond Sun is set for release on 14th April. It shows how much the group have developed and grown technically, after self-producing a multi-layered, instrumentally varied experimentation in post-production.

Filmed at Liverpool’s Vessel studio, the video remains in some sort of no-mans land between reality and the obscure, with a surreal, almost clinical interpretation of their live set. As is customary for Stealing Sheep, it fuses ethereal, saccharine vocals with grounded, synthy basslines to create an intense magic realism, akin to that you find among the hazy drug-induced dregs of a party at 7am.

With more attitude than Warpaint, and more synth than Laura Marling, the mix of folk, California Dreaming and 80s electronica perfectly to create a more British beach-pop vibe on their second offering – if Britain were to have any beaches capable of possessing a ‘vibe’.

Shifting the feminine sweetness we still seem to find with many alternative girl bands, Stealing Sheep add an assertive post-punk edge to their sound usually reserved for highly praised electro experimental acts such as Alt-J and Tame Impala.

Stealing Sheep tour the UK this year and play Liverpool Sound City on Saturday 23rd May.