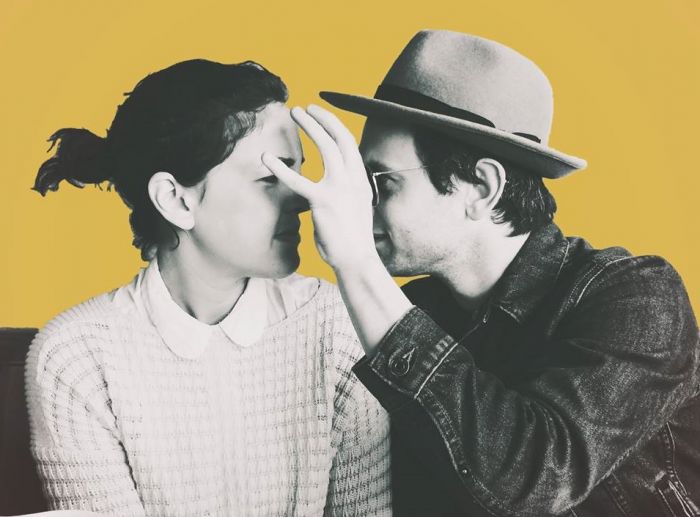 Basking in the afterglow of Sound City‘s dockland’s triumph, it feels as if our musical passions have been re-ignited. Of course we’ll always have that fire in our bellies for the finest ingots to be mined from the recesses of Soundcloud, yet with The Flaming Lips‘ monolithically incredible scenes still lingering in whatever receptors inspire that bleary-eyed beam that a banger can evoke, it’s with even more fervour that we bring you this week’s highlights of the very greatest in new music.

The first of which is the new EP Beautiful Liar from L.A. duo The Bad Years, where louche fuzz meets its match in tender hooks of pure pop, each rough, scuzzy alt-rock riff worming its way among the silken lyrics of Sami Akbari.

The washing alt-pop of Giving Up could sit happily beside the best of Mazzy Star, while Pieces sees Brian Jonestown riffs descend into an elegant neo-Americana ballad, but it’s the title track that affirms the group’s nascent hints of greatness, a soaring pop chorus emerging from a fug of garage guitars with a touch of 2014 standouts Allvays.

Plymouth pop-punks Woahnows, meanwhile, careen on a wave of pace and youthful ebullience on debut album Understanding And Everything Else, which though imbued with the kind of wistful, summery haze that draws us back to the heady days of Underage Festival ’08 (one hell of a day, in case you were wondering), is far from a stumble into an empty pit of nostalgia.

Though on the surface they carry themselves with little but pure, propulsive energy, beyond the relentless powerchords is a prodigious gift for all things melodic, not a riff out of place as adolescent affirmation emerges among the haywire cyclone of abounding guitars and yowled, vigorous vocals.

Finally, London electronic project Twin Fairy, though affably baffling in an email that informed us that their press pack includes ‘a tiesto megamix CD’, ‘a 15 foot tall Geodesic dome’, ‘assorted reptiles (live)’ and ‘some drugs’ – among others – counter their eccentricities with some tunes that are actually, well, quite good.

A handful of as-yet unreleased material we’ve got our hands on is a mind-expanding, cacophonous collision of lurching, richter-scale bass, TV-static screams and psychedelic vocals that somehow coalesce into the most essential of explosions, with VVALLEYS (mix 3,942) the most incredible of the bunch.

Their as-of-yet only public track STAY GOLD is like soft-rock in comparison, though equally intriguing in an elegant blend of rising, shimmering atmospherics, and though they talk a strange talk, there’s a quite genuinely individualist thrill when it comes to the walk.