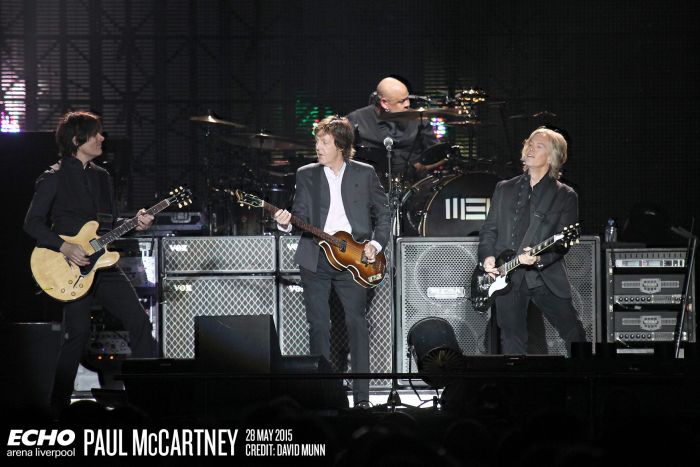 After Paul McCartney’s triumphant return to Liverpool last week, Getintothis’ Will Neville examines how he continues to enhance his reputation and keep things fresh at the age of 72.

To the naysayers and cynics, McCartney has been seen since 1970 (or even earlier) as the purveyor of Silly Love Songs and “granny music”, thumbs aloft collaborator with animated amphibians, or as his erstwhile sanctified partner once sang, “the only thing you done was ‘Yesterday’”.

Anyone who expects a man on the verge of his sixtieth year of performing in front of paying punters to be as innovative as he was in his twenties is clearly hoping for too much, but he continues to stretch himself both in the studio and on the live stage.

Partnerships with the likes of Mark Ronson, Paul Epworth, Kanye West, Rihanna and Lady Gaga over the last couple of years alone are testament to his desire to stay in touch with modern music, and the high regard in which he continues to be held by today’s biggest musical names.

Macca has often done what was least expected of him, though he has never completely buried his tremendous commercial nous. What other megastar would release a protest song against British involvement in Ireland, a nursery rhyme, and then a paean to sex and drugs as a trilogy of singles, as he did in the early 1970’s? And enable each of them to comfortably breach the UK Top 20.

As well as continuing to record and release great pop songs (three from his latest album New featuring in his Echo Arena set), he has added classical and electronic dance, painting and music publishing to his repertoire over the years.

He demonstrated his desire to offer his fans something unexpected alongside the much-loved classics when he played in Liverpool last week. Of course, his set included the likes of Hey Jude, Let It Be and Band On The Run, all of which he has performed in excess of 500 times over the years.

However, he also threw in the 1980 electronic oddity Temporary Secretary that he had never before played live until the UK leg of this Out There tour. He warned the audience that this might be a song where he would see considerably less light from phones taking pictures or recording video than when he sings a Beatles or Wings classic.

McCartney also gave a live debut to a Beatles song on this tour, adding Another Girl from 1965’s Help! album to his set. It was also the first time that he had ever performed beloved Beatles songs Eight Days A Week, I’m Looking Through You, Lovely Rita and Being For The Benefit Of Mr. Kite! in his hometown, while he and guitarist Rusty Anderson engaged in some top notch feedback at the end of Paperback Writer.

It’s probably a tough balancing act for a musician of his standing (not that there really are many others at that level) to keep his hardcore devotees happy while also pleasing the casual fans who just want to hear Yesterday or The Long And Winding Road, as well as keeping it interesting for himself, and his band.

However, he is clearly able to pull this off with aplomb, even more so than ever. Last week’s set list provided a much more varied evening than his previous, rapturously received visit to the city in December 2011.

He left the crowd begging for more having wowed the capacity crowd for practically three hours. And there could so easily have been more as he left unplayed nineteen Beatles songs that topped the charts in either the UK or US, and another nine of his that have done so since the band broke up.

Sir Paul will surely play more gigs in Liverpool in the future as he remains in remarkably good shape for his age, with his voice only slightly struggling at a couple of very brief moments across the three hours, despite his customary lack of even a sip of water whilst on stage.

If he returns, you can be sure he will provide a mix of crowd-pleasing songs and stagecraft alongside a few surprises and oddities. Thumbs aloft indeed.