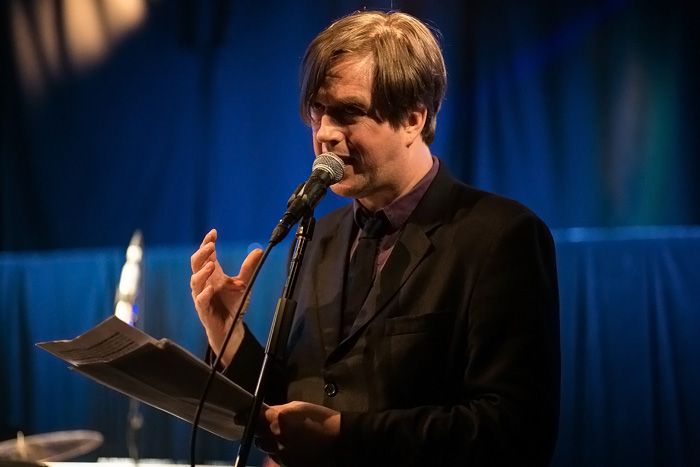 On a night full of blackly humorous tales of personal redemption, Getintothis’ Paul Higham finds Jolly Lad John Doran in a genial mood – and is left feeling uncomfortable at finding the whole thing so richly entertaining.

A book reading is always likely to be a tough sell on a Monday night. Especially on a Monday night before a potentially wallet-emptying, Sound City bank holiday weekend. Even the allure of a reading from The Quietus editor John Doran’s new book, Jolly Lad, failed to provide sufficient temptation. To say The Kazimier was sparsely attended would be a gross understatement.

Yet it was clear from the outset that a treat was in store for those able to attend. For this was no ordinary book reading.

Opening the night were Liverpool’s thunderous Barberos a trio who had so impressed Doran while acting as a GIT Award judge. Dressed in their trademark all in one lycra outfts, they immediately excelled with their powerful and abrasive twin-drummed assault on the senses.

While incorporating a range of musical styles into their sound Barberos often defy easy categorisation. Poly-rhythmic and highly skilled they blend krautrock, post punk, free jazz, prog rock (among others) in a thrilling fusion to make something near unique and relentlessly exciting.

The music and the spectacle combine into something special. Forceful and complex they are as mind-twisting as they are danceable. Difficult and accessible is a hard skill to pull off, yet it is one Barberos are able to master with aplomb.

Doran’s book is a revelatory yet bleakly humorous insight into man’s many afflictions. Alcohol, drug abuse and depression are never far from the surface. Yet it is immediately apparent that this isn’t a book that wallows in self-pity.

Without ever downplaying the problems of addiction and the effects that it can have on those closest, it revels in the ludicrousness of the ensuing social situations. In many ways such an approach provides a more effective deterrent than a hard-hitting, warts-and-all book could offer.

The opening reading of the night recounted the story of a particularly hallucinogenic bad-trip having taken a copious amount of fish food. Believing the bus to be occupied by vampires the anecdote rapidly descended into a personal version of hell as Doran realised that, with Halloween remaining months away, the vampires were real.

Similarly hard-hitting was the story of waiting for the bus the morning after a particularly heavy night at a lock-in in at his local pub. Drenched in alcohol-induced sweat, Doran was taunted by a young girl with a face painted as a tiger. Was she real or was she a figment of his imagination?

If both these stories, however humorously and richly retold, revealed a startling self-awareness and offered a window into the daily struggles of addiction, the book extends beyond the realms of the personal.

In many ways it acts as a piece of vital social commentary of a changing world, a world in which the physical landscapes and social norms that had held true for decades were being swept away. Doran’s hometown of Rainhill loomed large in his readings and his descriptions told the story of a town becoming increasingly bleak and homogenised, all in the name of progress.

Yet, apparent from the book, this was not progress for all. Denial of opportunity to those coming of age in the ever more fragmented society of the 1980s is hinted as being a cause of Doran’s spiralling descent into substance abuse. Such is his nature Doran would never cite this as the sole cause, yet the feeling of isolation, living on the outskirts of a Britain dominated by Thatcherist excesss is heavily alluded to. Alcohol and drug abuse became a coping mechanism amid a sea of dead end jobs and limited personal opportunity.

Throughout Doran was in genial mood, and the readings were laced with a self-aware black humour, inviting laughter at the anecdotes. Such is Doran’s skill both as a writer and as a reader, you are left slightly uncomfortable at being entertained. Yet entertained we were.

Subtle musical accompaniment was provided by throughout by Kjetil Nernes of Arabrot which provided a tension and an atmospheric sense of foreboding to proceedings. The readings do work perfectly as spoken word musical compositions in their own right. As if to demonstrate this, the book is accompanied by a CD on which Doran is backed variously by the likes of British Sea Power, Factory Floor and Nicky Wire and it sits happily as a standalone album.

The reading ended in a crescendo of cathartic noise as Doran willed the sky to collapse in and consume The Kazimier and Liverpool. In a few short months for many the sky will collapse as The Kazimier falls victim to the accelerating pace of urban gentrification. As a central theme of Jolly Lad, we’re sure that Doran would have something to say about this.

Barberos returned to the stage accompanied by James Binary, James Canty and Kenichi Iwasa for Krautrock Karaoke. Always an interesting collaborative approach celebrating the groundbreaking music of Can, Neu! and Faust, it was a thrilling end to the night.

Yet it suffered on a Monday with the sparse attendance making it difficult to wholly abandon yourself to the music as thoughts inevitably turned to the journey home and the toil of the working week. Bring it back on a weekend and this party-hungry city would no doubt lap it up. 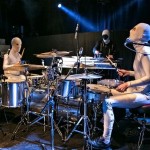 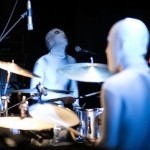 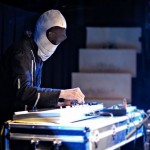 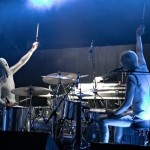 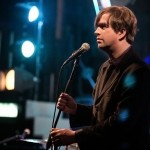 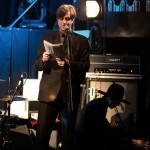 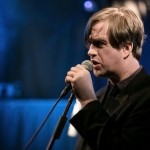 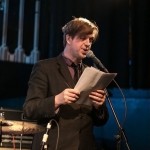 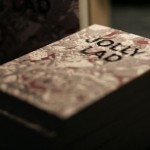 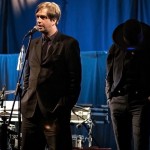 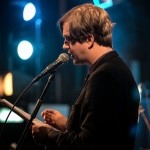 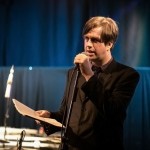