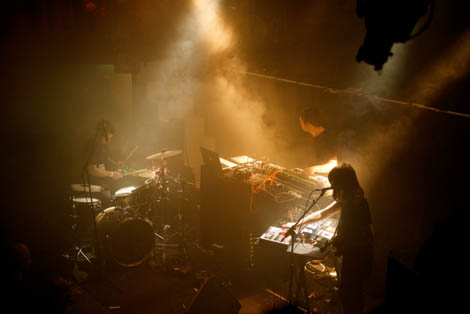 A lack of bodies at early door wonders is compensated by jam-packed madness as the night kicks in, Getintothis’ Adam Lowerson reflects on a dramatic evening at Liverpool Sound City 2014.

There are too many different venues at Liverpool Sound City. Or maybe the bands start too early.
Whatever the reason, when artists such as up and coming singer/songwriter Josh Record perform their beautiful, melodic folk-pop to a crowd that can’t have contained more than 20 people at the Anglican Cathedral, something somewhere is going wrong.
Another sufferer of super-early-slot-syndrome is Scotland’s Soldier On, entertaining (and we use that word loosely) a small handful of people at the Attic. However, their brand of typical ‘we love Oasis’ guitar music lacks any new ideas at all, and is probably why they have been stuck on so soon in the day.
As drinks start flowing the crowds start growing, as Liverpool’s next soul star Taylor Fowlis attracts an impressive crowd to the East Village Arts Club for one of the newest names on the scene. Her set of soft jazz and soul inspired ballads showcased her songwriting and vocal talents well. She’s got big hair and a voice to match. 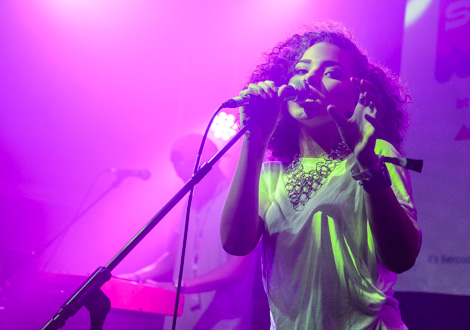 Taylor Fowlis performing live at East Village Arts Club
Blackpool singer/songwriter Rae Morris performed to a yet again completely packed out Zanzibar, and her indie pop sounds with an R&B undercurrent earned her a lot of admirers.
The prize for the biggest crowd of the night without a doubt goes to Brighton duo Royal Blood, whose singles such as Little Monster and Hole have gained them a huge following, and it is well deserved. Their show is packed with Queens of the Stone Age inspired punch and huge bass riffs which could probably be heard from all the way across the Mersey.
If there is one thing that Sound City is best at, it is the unexpected moments of beauty, and the set of New York folk singer Gambles at Leaf was a perfect example.
The performance consisted of Gambles performing unplugged on an acoustic guitar, and with no microphone, in the middle of the venue, with his crowd circled around him in complete silence and awe. The set was incredibly intimate and personal, and felt like a moment that people who missed it wouldn’t understand. 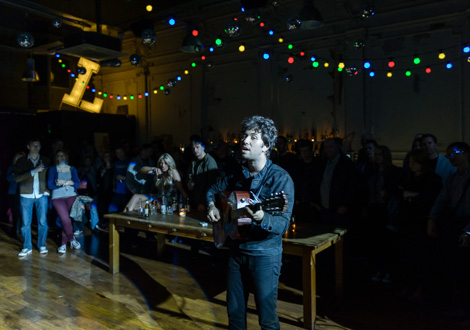