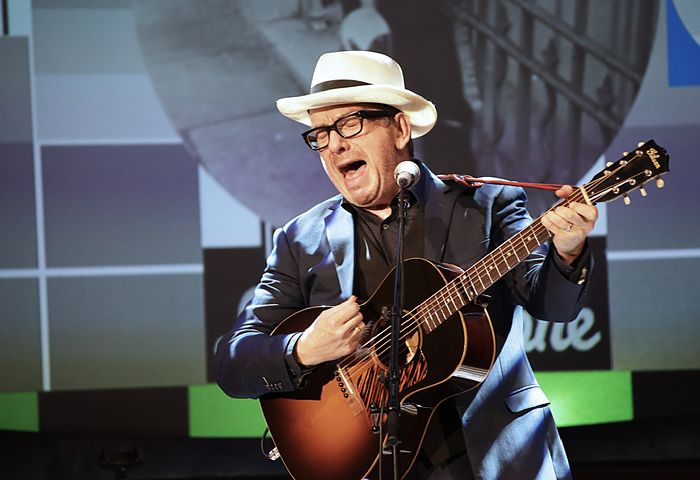 Elvis Costello had the crowd at his fingertips for two and a half hours with just a few acoustic guitars in his arsenal, Getintothis’ Patrick Clarke sums up an intimate masterclass from Birkenhead’s finest.

Elvis Costello is on the Philharmonic stage for over two and a half hours. Come the end of the evening he’s done three encores, alone for the majority of the set with only an armory of acoustic guitars, a piano and a panama hat to keep his crowd occupied. That he’s so unremittingly engaging for almost the entirety says it all.

In his opener, an acoustic cut of The Angels Wanna Wear My Red Shoes, Costello sets his tone for the evening – each recital a remarkable re-imagining, the jagged thumps, spikes and descents of his considerable catalogue sanded down to an acoustic core and hurled forth with breathtaking fervour.

Though often slowed, the songs are never blunted, their impassioned depths lent the space to rise to the surface, holding up with considerable stature when stripped of bells and whistles. A piano-led version of I Can’t Stand Up for Falling Down is perhaps the night’s most apparent illustration, the frantic, spiky jitters of the 1980 original transformed into an impassioned ballad, its brilliance thanks in no small part to a feverishly emotive vocal from Costello himself.

Magnetic throughout in his skittish thrusts and poses, the singer’s still got every ounce of the endearingly offbeat cool that’s set him apart for the last four decades, and as sweat drips from his spectacles as he bellows his way, intensely wide-eyed, through a particularly ferocious Watching the Detectives with wide-eyed it’s apparent that he simply still means it.

The crowd, almost entirely consisted of old-timers who’ve aged along with their evening’s entertainment, lap up every ounce with clamorous applause, and their enthusiam’s well-reciprocated on-stage. “It’s great to be home,” Costello proclaims in the first of many addresses, while the very mention of the word Mersey in Oliver’s Army gets a rapturous reception of its own.

In conversation Elvis is similarly captivating, anecdotes on the life and times of his hugely inspirational sailor/musician grandfather to whom he dedicates Jimmie Standing in the Rain, his days as a computer scientist, and his native North-West in turn heart-rending, fierce, genuinely hilarious and surreal (“I’d like to introduce my very special guest… it’s me!”), it’s in his patter that Costello keeps the intimacy of the night in check.

After an hour and a half or so, Elvis leaves the stage to a standing ovation, but it’s to be only a brief sojourn, and on his return he’s joined by Rebecca and Megan Lovell, a.k.a. Larkin Poe, on slide guitar and mandolin, whose charged, if conventional support set opened the evening. They’re impeccable musicians, and the sisters lend an injection of texture to keep the marathon performance fresh, yet in a strange way the pair hamper the sense of intimacy that’s driven the night thus far; one man, one crowd, we want him all to ourselves.

It’s a minor gripe, given how strong the new trio perform, and as they depart to another standing ovation there’s a renewed sense of energy in the room to thank them for. The night’s not over yet, however, as the screen of the enormous Lupe-O-Tone mock TV that’s backed the stage drops to reveal Elvis inside, clutching his guitar with modish poise.

Rocketing through his next set, including an exceptional rendition Alison, it ends, once again, with a standing ovation, before one last jaunt on the main stage for a rocketeering What’s So Funny About Peace Love and Understanding. By now the crowd are whipped into rhapsody, and all at the hands of one man and a few acoustic guitars. Not bad at all. 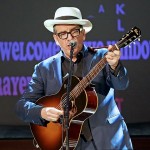 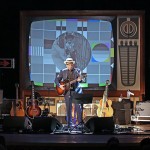 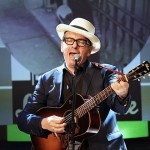 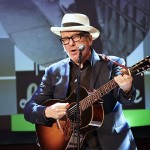 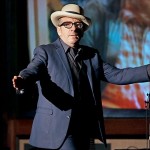 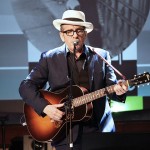 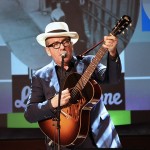 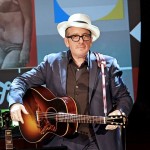 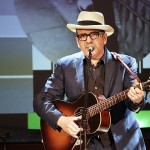 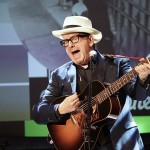 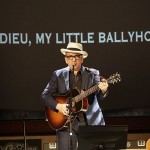 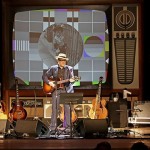 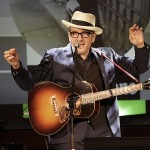 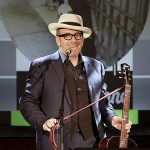 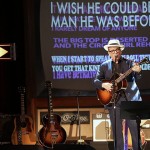