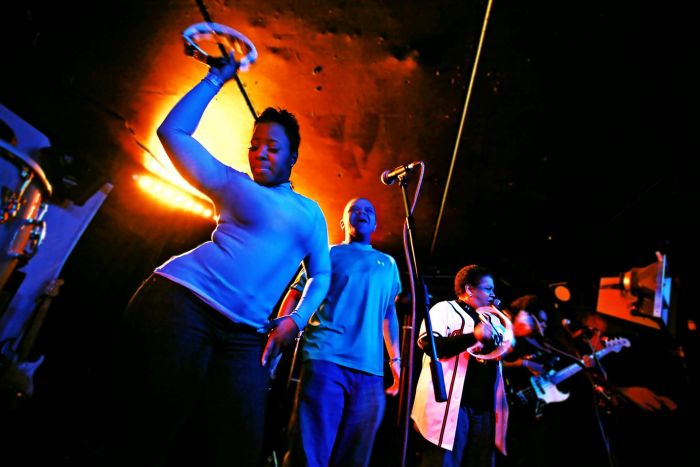 With South Bronx’s finest ESG set to play a much-anticipated show in The Kazimier later this year, Getintothis’ Craig MacDonald rejoices in the seminal group’s arrival.

Few groups have had such a far cast influence on modern music as that of South Bronx’s ESG. Formed in the late 70s when their mum bought them instruments to keep them off the streets, the band have inspired countless others with their unique sound from the likes of hip hop heavy weights Beastie Boys & Wu-Tang Clan to indie darlings The Strokes & Franz Ferdinand.

Emerald, Sapphire and Gold were originally the four Scroggins sisters but have since altered their line up many times bringing in neighbours, children of the original members and even the odd man at times. The one thing that has never changed through all the incarnations of the group is the diversity of the music they produce. ESG are the square peg in any round hole.

The group’s first EP is possibly one of the most sampled records ever made, with the track UFO being sampled by Nine Inch Nails, Liars and Girl Talk to name but a few that have used it to their advantage. The much contested use of samples is a subject that the group have been highly vocal of to the point where they vented their anger on the 1992 EP Sample Credits Don’t Pay Our Bills. The band’s sound is embraced by all who it consumes and it is easy to see why it has been used for others’ gains.

From the intense house-friendly Moody to the raw punk offering of Chistelle, there are no boundaries to the sound that ESG produce. This is a band that played the opening of The Hacienda and has played alongside The Clash. The fact they have so much influence yet have only released 5 albums in their 30 year tenure is surely a testament to them.

Although many may not be familiar with their work, there are few groups that live up to the billing of essential listening. ESG are one such group and when they play The Kazimier on 27 September it shall be a fitting setting for the seminal band to grace us with their presence.