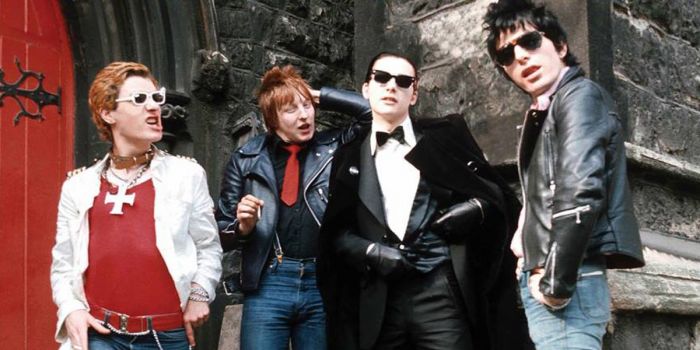 Ahead of a FACT screening this month, Getintothis Del Pike reflects on Wes Orshoski’s new documentary on punk powerhouse The Damned.

What is it about The Damned that places them below the radar when discussing classic British punk? The Pistols and The Clash are default touchstones but somehow The Damned appear best remembered by casual observers for their pantomime turn in The Young Ones, their theatrical 1986 chart offering Eloise or possibly Captain Sensible’s novelty spin off hit Happy Talk .

Edgy rock photographer and sometime filmmaker/ music video director, Wes Orshoski is set to redress the balance and put The Damned back in the punk Pantheon where they belong, with his new documentary showing at FACT this June, THE DAMNED – DON’T YOU WISH THAT WE WERE DEAD?

A cursory glance at the trailer suggests that The Damned were certainly respected by their peers for their musicianship as much as their notoriety with luminaries such as Mick Jones, Don Letts and Steve Diggle singing their praises, and former short term Damned member, Lemmy citing them as “The true punk band”. As the title suggests, it could be that the deaths of Sid Vicious and Joe Strummer have lent their respective bands added cult value; the fact that all prominent Damned members remain intact may have worked against them.

Orshoski’s film follows his universally acclaimed 2010 documentary LEMMY which transformed the director from a Motorhead fan to a “lifelong friend” of the legendary frontman. The positive response from audience members at this year’s SXSW festival, where The Damned movie premiered, suggests that Orshoski is maintaining his fan boy status, but this is far from a standard vanity project.

Much like Don Letts’ 2005 paean to the movement, PUNK ATTITUDE, this promises to be a project from the heart. Orshoski’s photography, of which he is more widely known, clearly leans towards the raw side of the music world, and as Anton Corbijn’s Ian Curtis biopic Control proves, the transition from stills to motion can be a wonderful thing. If the hard edges of Orshoski’s images are a yardstick of his talents, then DON’T YOU WISH THAT WE WERE DEAD? should prove as much as a visual experience as a lesson in punk history.

THE DAMNED: DON’T YOU WISH THAT WE WERE DEAD? will be screened at FACT on June 9.