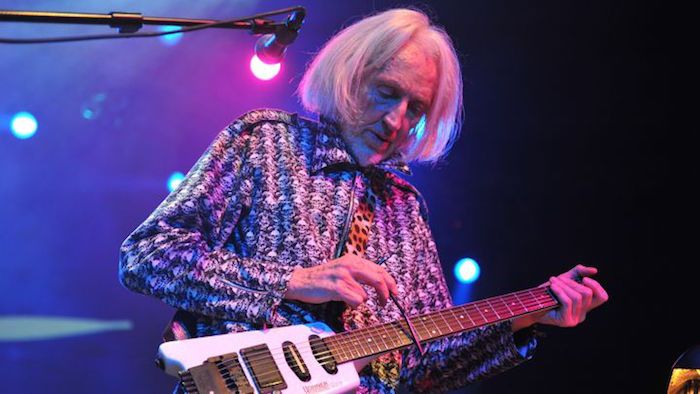 After the sad and recent passing of founding member Daevid Allen, Getintothis’ Matthew Wood looks ahead to Gong’s show at the Kazimier.

Gong may ring a few bells with some of you, but their universe of flying teapots, radio gnomes and unparalleled space rock is a universe that needs exploring. Looking into recently deceased frontman and founder Daevid Allen’s eyes will give you at least a subtle hint towards the kind of universe you’re about to submerge yourself into, wide and wild, it’s hard to be surprised when you’re struck with sinister gurgles of hysteric laughing, smooth, elegant sax solos with outbursts of ‘I only wanna lick you’ (Witch Song/I Am Your Pussy) make for a medley drowned in the avant-garde, brimming with psychedelic riffs to rival Pink Floyd and 13th Floor Elevators.

Narratives that are abstruse, to say the least, permeate their albums lyrically, slipping down avenues riddled with oddities and wacky figures like Pot Head Pixies, one can’t help think that Gong’s kaleidoscopic fruitage would make a perfect accompaniment to Terry Pratchett’s Discworld series.

Those left with a void in their psyches since Daevid Allen passed away will no doubt be pleased to hear Gong are continuing transporting us to surreal settings and gracing us with unmatched downright weirdness that is undoubtedly a spectacle on stage. Their upcoming Kazimier show on November 3 is an opportunity to not only submerge yourself into a deluge of seductive, intricate, bewitching arrangements, but also a step towards musical enlightenment (if that’s what you’re into) and proof that even the freakiest, most far out expeditions are often the most rewarding for everyone involved.