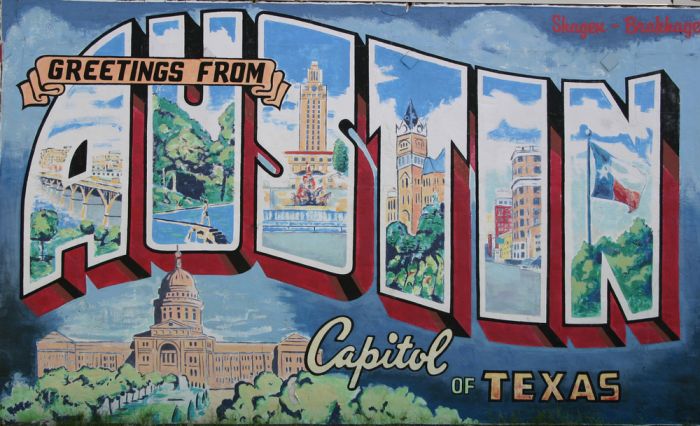 As SXSW gets set to once again take Austin by storm, Getintothis’ Paul Higham reflects on the city’s musical status and picks over some of the city’s most cherished musical exports.

With SXSW just around the corner, what better time to celebrate the diverse musical legacy of the self-proclaimed live music capital of the world: Austin, Texas.

Austin makes much of its outsider status. Another of its unofficial civic slogans is “Keep Austin Weird”. It remains a musical melting pot of a city, one where contrasting styles sit side-by-side. The alternative and the left-field exist happily alongside more traditional musical forms. Cowboy hats, skinny jeans, alligator boots and imposing tattoos all coalesce in an easy fraternity.

Even the most casual visitor would find little to dispute that Austin is a live music stronghold. Performances assault your senses from every corner as the desert climate has resulted in many outside venues.

Notwithstanding this, it is a city that risks biting the hand that has fed it for so long. The iconic 6th street has become little more than a best-avoided tourist destination. The grimy and iconic Emo’s has been forced to close its doors in the face of relentless and soulless gentrification (sound familiar?). Nonetheless the likes of Mohawk, Red 7 and Stubbs BBQ offer unique settings in which to experience live music, while venues of historic importance such as The Continental Club and The Broken Spoke continue to thrive.

In celebrating its importance and its legacy we look at ten of the most distinctive and influential artists that have called Austin home. Reflecting the city’s breadth, a range of musical styles are covered yet in our desire to do more than scratch the surface some obvious contenders appear alarming omissions.

13th Floor Elevators are rightly renowned for the longevity of their influence on psychedelic rock, yet many words have been written already to which there is little left to add. Willie Nelson is rightly renowned as one Austin’s favourite sons to the extent that there is a recently unveiled statue smack back in the centre of downtown Austin. Another statued and celebrated Austinite not to feature is blues virtuoso Stevie Ray Vaughan, whose likeness sits at Auditorium Shore on the banks of the Colorado River.

Such is Austin‘s undoubted pedigree we’re sure there will be many more of your favourites that have not made our list, but hopefully there are one or two below that you might just discover for the first time – lucky you.

Follow @Getintothis for intermittent updates from SXSW – and jump to the bottom of our top 10 for a taste (a mere selection) of some of the artists confirmed to play next week.

Dale Watson in many ways embodies the spirit of Austin. A country musician railing against the countrypolitan commercialism of Nashville (check out his song, Nashville Rash), Watson revels in his outsider status and revives the electric twang of the Bakersfield sound.

Hard drinking, hard living and adorned with tattoos, Watson is not your stereotypical modern country music star yet in many ways he is “more country now than country, just like Johnny Cash“. Having enjoyed a long-standing residency at the Continental Club, Watson is a true icon of the Austin music scene.

His video for South of Round Rock, Texas affirms his love for his adopted home and contains nice archival footage of the city.

But for the actions of their record label, International Artists, Golden Dawn could conceivably have achieved the sort of fame enjoyed by their contemporaries 13th Floor Elevators.

Their debut album, Power Plant, was recorded prior to the release of 13th Floor Elevators 2nd album but was inexplicably held back by the label. Upon its release some time after the Elevators‘ Easter Everywhere it was derided as little more than a hastily delivered derivative copycat.

If such an assessment seemed harsh, the passage of time has proved kinder. Power Plant is now rightly revered as a lost classic and singer George Kinney has reformed what is left of the band, performing three times at Austin’s Psych Fest.

Racing right back to the present brings us to White Denim, an electrifying four piece whose amalgam of diverse styles feels very much at home in Austin. The prolific band, now onto their sixth album, combine many different influences including blues, progressive rock, psychedelia, garage-rock, soul, southern rock and much more besides.

One of the most accomplished and visceral live bands, White Denim combine technical proficiency with freeform abandon and sound quite unlike any band on the circuit today. A real treasure, from the blown out garage-rock of their early recordings right through to the more sedate blissed-out sonic soothings of Corsicana Lemonade.

Guitarist and singer, James Petralli has some solo material out imminently too – that is one not to be missed.

In contrast with the rest of Texas which remains steadfastly conservative, the state capital has long been home to artists of a left-leaning bent. This was never more apparent than during the American hardcore boom of the early 80s as punk artists united in opposition to Reagan-era politics.

One of the most important artists was The Dicks, who formed in 1980 around one of the scene’s few openly gay musicians, Gary Floyd. Their first single, Dicks Hate The Police, now stands as a seminal moment of the American hardcore punk scene. Sung from the perspective of a policeman who goes on the rampage taking his anger out on civilians and minorities, its message remains depressingly relevant today.

Spoon are a revered Austin-based quintet rock group, perhaps best known for being the darlings of the critics without necessarily having experienced the broader commercial success their talents deserve. Named after a song by Can, Spoon formed in 1993 and quickly became compared to the likes of Pixies and Wire.

Testament to the band’s status and longevity, they were awarded the accolade of Metacritic’s artist of the decade in the 2009, surefire evidence of their enduring appeal .

Their latest recording, They Want My Soul, shows that Spoon remain at the top of their game with all their tell-tale characteristics remaining present and correct: honed, considered and meticulous, it provides a telling reminder why they have been for so long critical darlings.

Stars of the Lid are Brian McBride and Adam Wiltzie and make textured ambient music, drawing influence from minimalist composers such as Henryk Gorecki as well as artists such as Brian Eno and Talk Talk.

Beatless and formless, the duo’s music is characterised by heavy use of drones as well as guitar and piano effects. Rhythmical and dynamic their music ebbs and flows with a broad dramatic tension as waves of feedback fill the gaps where drums and vocals would otherwise have been clumsily placed.

The absence of drums lends their music a classical and timeless majesty. Indeed the band’s name refers to “the personal cinema between one’s eyeball and eyelid” as their music evokes colours and patterns.

With their roots in the hardcore punk scene of the early 1980s, Butthole Surfers were formed by Gibbey Haynes and Paul Leary and quickly became renowned for their eccentric and disturbing live shows.

Combining a reputation for heavy recreational drug use with a musical style incorporating elements of noise-rock, punk rock and psychedelia, the band quickly gained a cult following, particularly as a live outfit.  Frequently chaotic, the band’s live shows included burning cymbals, strobe lights, smoke machines and overlapping and disturbing 16mm films which, when all combined created a disorientating atmosphere where audience seizures were not uncommon.

The band’s landmark release for which they are most known, Locust Abortion Technician, was released in 1987 and is in many ways the band’s darkest and heaviest recording, harnessing elements of Black Sabbath through an alternative noise-rock prism.

Likened as an American Birthday Party, Scratch Acid were a pioneering noise rock band that pushed sonic boundaries combining elements of punk and post-punk into an incendiary maelstrom of uncompromising noise. Raw and energetic, their all-too-brief career left a legacy that provided a template for others to follow.

The band has occasionally reformed in recent years, notably tearing the house down at the Jeff Mangum curated ATP festival in 2012.

Standing for Millions of Dead Cops, MDC were one of Austin’s foremost hardcore punk bands of the early 1980s. Sharing similar political beliefs to Dicks, the band achieved notoriety for their staunchly left-wing stance and their participation in the Rock Against Reagan tour.

The band’s debut LP, Millions of Dead Cops, is now widely regarded as a classic of the American hardcore movement. While its most famous song was John Wayne Was A Nazi, other cuts were similarly loaded in their focus. I Remember was harsh in its criticism of the police while capitalism, homophobia and right-wing American culture became focus of the band’s erudite criticism.

Closely associated with Jello Biafra, the band released material through his Alternative Tentacles label before reaching a wider audience by touring with The Dead Kennedys.

Although the band perhaps failed to reach the extraordinary heights scaled by their seminal debut, later albums retained the strong political sensibilities that so characterised them. EPs Multi Death Corporations and Millions of Dead Children were typically politically charged while South African apartheid and the US administration’s interventionist policies in central America informed their later career output.

The band rather fizzled out in the mid-1990s before reforming in the mid-2000s with an all-new line-up. While the energy and dynamism of youth could not be recaptured, this should not diminish the legacy of the band that sits right up there with the very best.

Who knows, if it wasn’t for Kurt Cobain famously wearing a Hi, How Are You? T-Shirt perhaps Daniel Johnston might be a mere footnote in history. One of many singer-songwriters not to have achieved the success that their undoubted talents merited.

While the world has many other reasons to be grateful to Kurt, perhaps it is for bringing the mercurial charms of Daniel Johnston to a wider audience that we should be most grateful.

Much has been written about Daniel Johnston‘s on-going mental health struggles and in this context it is remarkable that he has remained able to write and perform. Often watching him perform his songs is a cathartic experience for both audience and artist alike. It seems that the desire to perform provides meaning and purpose and, from the audience’s perspective, the triumph over adversity and the collective will for him to succeed is an upliftingly unifying experience like none other.

However what makes Daniel Johnston so special and so unique is his songwriting, his innate musicality coupled with his ear for melody, and his seemingly complete understanding of songcraft. Like his lyrics, his melodies are deceptively simple yet emotionally complex and immeasurably perfect. So much so that it becomes difficult to explain why. They just are.

He loves The Beatles, that much is well known – heck he even has a song about it – and much of what he does recalls them without ever imitating or copying. Like all great music, there is a timeless classicism about Daniel Johnston and, much like his beloved Beatles, his music will never age.