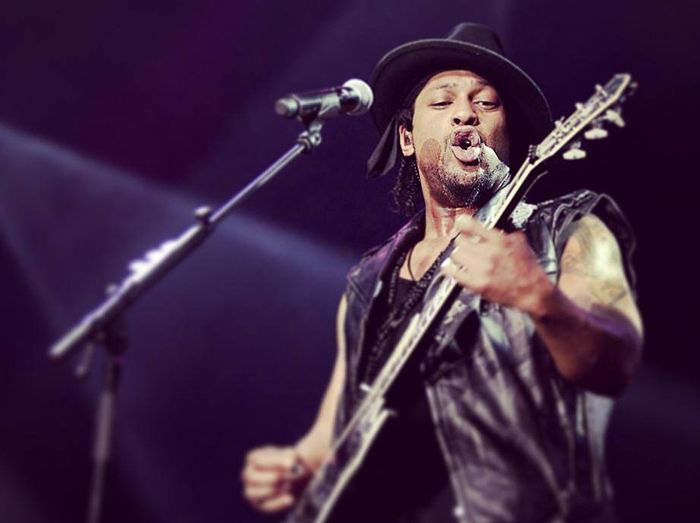 We made our pilgrimage to Club Paradiso, a former church building in the Grachtengordal district of Amsterdam. The venue’s stained glass and high ceilings threatened to overstate the occasion, as we waited, transfixed by an endless loop of Donuts playback.

A 14 year absence inevitably fuelled the opinion D’Angelo had become a frustrated studio recluse. A cynic might equate this terminal procrastination with a growing apathy. Worse still, what if the arch seducer had lost his sexy in the years that had elapsed since Voodoo?

Defiantly, a solitary D’Angelo greets us with his soulful incantation, Prayer. Adorned in an exceptional wide-brimmed hat, he engages the congregation with all the candour and conviction of a Pentecostal preacher.

As the stage is lit to a laid back groove, we are abruptly compelled by the unmistakable vocal charge of 1000 Deaths. With the zeal of black revolutionary Khalid Abdul Muhammad ringing in our ears, the supporting cast take their places and the tone is set.

The band are introduced as we are treated to more new material; Ain’t That Easy and crowd favourite, Really Love leave the masses adulating. A smitten D’Angelo impresses with his new found guitar abilities.

While The Charade provides the partisan, political message, the soul-purveyor still has time to indulge his Lothario tendencies. Costume changes and choreographed dance moves further reveal his aim to please.

We are metaphorically impregnated by Roberta Flack cover Feel Like Making Love and an extended rendition of the flirtatious One Mo’Gin. The crowd become hypoglycaemic as Brown Sugar follows Alright. Spurred by the unfolding funk, the mood of the room becomes ecstatic. D’Angelo channels the eternal circus of George Clinton and the audience respond as if screen testing for Soul Train.

D’Angelo is inconspicuous with his references. Summoning the call and response style of James Brown, or emulating Sly Stone may register to some as pastiche, but these intentional nods are an overt homage to Black Messiah’s ethos – the celebration of charismatic leaders.

Our devotion is requited with multiple encores. The band strut through the snap and clap of Sugah Daddy and the head nodding Chicken Grease. Fluid funk teases us with false endings and elusive syncopation until Untitled (How Does It Feel) consummates a miraculous encounter.

The Second Coming Tour has delivered redemption to an artist self exiled by personal conflicts.