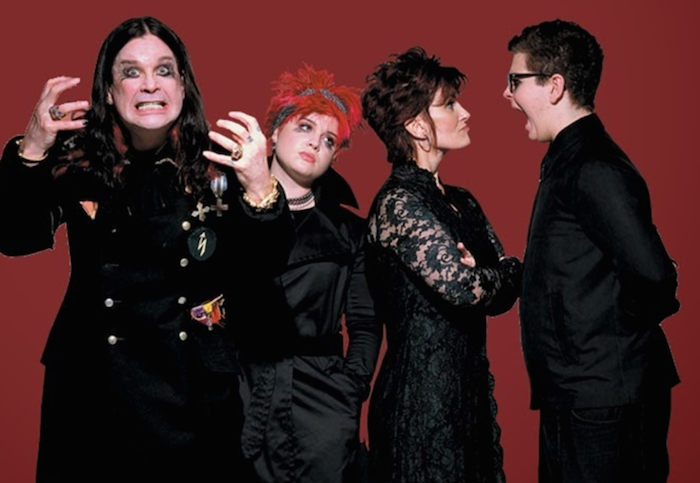 Having watched horrible, long-forgotten TV variety shows starring the Osbournes and the Jacksons over this last week, Getintothis’ Shaun Ponsonby puts his foot down.

I stumbled across two very weird TV shows starring musical families this week. They were both pretty old, but in many ways it was like the video tape in The Ring. The subjects had, metaphorically at least, crawled out of the television (laptop) to stalk me. And I have been able to think about anything else. Including the safety of my friends and family, seventeen of whom were involved in a series of bizarre accidents since viewing. Well, I say “friends”. At least 75% of them were just acquaintances, and one of them was just the guy who cuts my hair. But, you know what I mean.

Remember MTV’s The Osbournes? The show that reduced hell-raising, ant-snorting, Alamo pissing, bat biting co-inventor of heavy metal Ozzy Osbourne to a man with a broken foot, chasing a cat around his back yard, struggling on crutches and yelling “SHARRROOONNNNN!!” at random intervals.

As funny and entertaining as the show could be (in its first season, at least), you can’t really argue that a massive part of Ozzy’s public image and branding was ruined. Perhaps he merely switched it for another. Something that was more of an eccentric everyman image.

What you may not have seen is Osbournes Reloaded. This was Fox’s bright idea. “I know!” the executives presumably said in idiotic unison. “The Osbournes is a big hit, let’s put them in a totally different environment in front of an audience, because that will definitely work. Who doesn’t want to see The Osbournes presenting a foul-mouthed variety show?”

It turns out the answer to that question is “everybody in the whole world”.

What you have with Osbournes Reloaded is Ant & Dec’s Shiturday Night Takeaway mixed with an article that ends with the phrase “…before turning the gun onto himself”. It’s a peg below fictional spin-off The Simpsons Family Smile-Time Variety Hour (Cosmic Slop’s 900th Simpsons reference in 30 columns, a new world record).

So, it came to pass that in the same month my Nan died – which I will maintain is surprisingly significant – Osbournes Reloaded was broadcast across America in all its glory.

Actually, that’s not true. Out of the six episodes shot, only one was broadcast. And that was cut down from an hour to just thirty-five minutes. And most of Fox’s affiliates either opted not to broadcast the programme, or to show it at about 2am when only the very drunk or stoned would be awake to watch it, which undoubtedly helps with the experience. Because who in the world would want to see these items;  Jack and Kelly Osbourne co-ordinate the drive-thru line at a fast food joint and MAYHEM ENSUES! A sketch called Littlest Osbournes, where toddlers dress like Ozzy and Sharon and swear a lot and MAYHEM ENSUES! Ozzy Osbourne in Flashdance and MAYHEM ENSUES!

Actually, scratch that last one. I think I can safely say, without fear of contradiction, that we all want to see Ozzy Osbourne starring in Flashdance.

Consider how out of step it is when one of the items feature the family Osbourne meeting another family whose surname is Osbourne in a feature pre-parodied by Alan Partridge in Knowing Me, Knowing You (that feature, incidentally, was called Knowing Me Alan Partridge, Knowing You Another Alan Partridge). You can hear Ozzy’s Black Sabbath bandmate Tony Iommi turning in his grave, and he isn’t even dead.

I’m guessing some of you don’t believe that this is really a thing, so here’s Fox promoting the show on their “news” channel;

It was bad. And it sadly put to rest the hotly anticipated Sound of Music remake in which the Osbournes were planning to star that existed in my head, with Sharon as Maria. Surprisingly, Ozzy wasn’t going to play Captain Von Trapp, I had him down for Mother Abbess.

I was convinced that I had officially seen the world’s most baffling musical family-based TV show. Nothing could possibly be weirder than this.

But, then I really shouldn’t have underestimated The Jacksons.

1994 was a big year. Silvio Berlusconi first became Prime Minister of Italy. OJ Simpson was arrested. Kurt Cobain committed suicide. And the Jackson family thought it was a good idea to put on a bizarre TV special/awards show called Jackson Family Honours from the glamorous MGM Grand in Las Vegas.

And, yes, I mean the Jackson family. They were all there; Michael, Janet, Jermaine, the dad who beat them…the others…not LaToya. No, LaToya was estranged. Her husband/manager at the time, Jack Gordon claimed he was going to sneak LaToya in disguise, dressed as an Arab (no, really, he said that!).

Janet Jackson was arguably at her commercial peak at the time. She performed her hit Alright towards the beginning of the show, and wisely left very, very quickly not to be seen again. Jermaine tried his best to stage a comeback with a solo set that was as tedious as it was boring. There was also a weird moment when all of the Jackson brothers whose name wasn’t “Michael” sang songs from the one album he wasn’t on with their largely unknown sister Reebie and their – and it pains me to say this – completely untalented kids. I mean, seriously. For some reason they put one up front that hasn’t yet learned the difference between “left” and “right”. Why is that? That’s just bad choreography. And it won’t stand in Vegas, Zeusdamnit!

There were other performances; Celine Dion for some reason. Dionne Warwick for some reason. Bruce Hornsby for some reason. At one point comedian Paul Rodriguez came out and did a stand-up routine about an earthquake in Los Angeles. For some reason. And then was the woeful Jackson 5 for the New Jack Swing era the aptly named Another Bad Creation, which just makes you wonder what the fuck happened to Motown.

But this was primarily an awards show. Actually, that’s not true. It was a bizarre PR stunt masquerading as an awards show. But officially at least, it was designed to “honour” people for…reasons. For the inaugural event, they had two recipients in a show that lasted nearly THREE hours (they edited it down for the broadcast, thankfully). Firstly was Motown founder Berry Gordy, probably just because he put the Jacksons in the position they were in to put on such a gaudy event.

Hey – Berry Gaudy! I literally just came up with that right now!

Secondly, Elizabeth Taylor because…I dunno. She was a friend of Michael’s, I guess.

Speaking of Michael, he does make an appearance. He’s saved right to the very end to give the awards. A year earlier he’d have been at the height of his fame. Just a shame that those pesky kids accusing him of being a paedophile got in the way between then and the show.

Yes, this was MJ’s first public appearance since the nasty 1993 allegations, and the crowd go predictably nuts for him, whilst Elizabeth Taylor takes it upon herself to tell the audience that Michael would categorically not be performing, leading to widespread boos. To which Taylor brilliantly responds with “that’s not nice”.

The whole thing ends with a crappy family singalong. How crappy, you ask? Jermaine wrote the song.

Probably simpler than that; it was bat-shit cray-cray (as, I’ve been led to believe, “da kidz” would say).

So, it’s for that and many other reasons that I hope are abundantly clear without having to state out-right, thus leaving some open interpretation that makes me seem more intelligent than I actually am, that I make the following announcement; when I inevitably establish my Reich, every single musical family will be barred from creating television shows for any reason.

I had intended to make fun of the guy who cried when Dave Grohl sang My Hero to him. Then I read that he attended the show having buried his mother that afternoon. So, I’m guessing that material is out of the fucking window now.

It seems Jason Derulo was kicked off a flight after “his people” kicked up a fuss when he was refused a Transportation Security Administration on account of the machine being broken. My guess is that they recognised him.

I bet you were all expecting me to cover the Ned Flanders metal band, weren’t you?