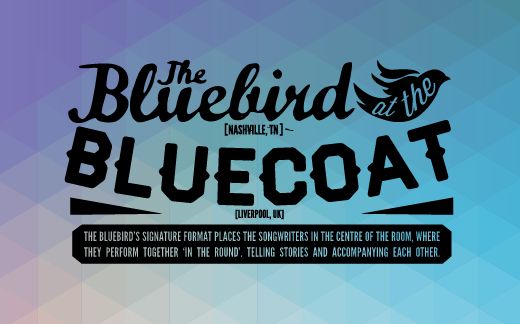 The Bluebird at The Bluecoat

The Bluecoat hosts a Scouse Stateside mash up as part of this year’s Liverpool International Music Festival celebrations, Getintothis’ Del Pike breaks down the day’s activities so you don’t have to.

As part of the LIMF festivities, The Bluecoat have invited some very special guests from Nashville in a unique Scouse/Stateside team up. Bluebird at the Bluecoat will celebrate the art of collaborative songwriting in a day long event that will inspire and entertain.

In an era when the majority of radio stations and TV channels look no further than X Factor friendly acts for their music provision and generations of kids are growing up thinking Ed Sheeran is as progressive as it gets, it is refreshing to find a project that takes music right back to its origins and sets out to remind folks about the art of song writing.

Since 1982, The Bluebird Café on the outskirts of Nashville has been doing just that, keeping it real. It’s not just for country fans either. The Bluebird prides itself on embracing songwriters who have written music for all genres and they aim for these important figures to return to their craft in a forum with other like-minded souls.  Referring to the venue as a “listening room”, the ideology of respect is immediately in evidence.

The idea is that audiences can witness the song writing process as it happens, in a friendly forum they can see artists discussing, jamming and assessing each other’s work, culminating in a performance of music in it’s most raw and fresh state. The café boasts Carrie Underwood, Garth Brooks, LeAnne Rimes and American Idol winner Reggie Hamm on their roll call. Writers are encouraged to deliver their own take on their songs that others have gone on to enjoy chart success with.

Not to feel outdone, Liverpool is grabbing a slice of the action with their Bluebird at the Bluecoat event on Saturday August 29 as part of the LIMF weekend. Bob Harris (BBC Radio 2), David Macias (Thirty Tigers), Erika Wollam (The Bluebird Café), Ralph Murphy (ASCAP) and Yaw Owusu (Liverpool International Music Festival) have collaborated (as Monkey Mind Productions) to create a day-long event that will be a must to anyone even vaguely interested in the song-writing process. Two Liverpool writers have already been dispatched to Nashville to hone their craft with the Stateside experts and the fruits of their labour will be appreciated on August 29.

The day will start with a free session that features the Liverpool finalists and our Nashville visitors in the Bluecoat Theatre Space (2.00-5.00). Although this is essentially a workshop, the focus will be on the finalists performing their songs to the panel and gaining their feedback and advice in front of an audience.

From 6.30 to 8.30 The Bluecoat will attempt to re-create the atmosphere and structure of The Bluebird Café by introducing Don Henry, Kim Richey, Kirsty McGee and Karen Turley, along with our Liverpool winners into the round for a twilight session of performance and discussion. We are promised a session that is as close to The Bluebird experience as possible, complete with being individually seated by friendly Bluebird staff.

From 9.00 to 11.00, (whispering) Bob Harris will be hosting the late show featuring Beth Nielsen Chapman and Jim Lauderdale in discussion and song, alongside other special guests who are still to be announced.   There will be an after show party too which will give ticket holders an opportunity to mingle with all involved, alongside further entertainment and exclusive freebies. The full day promises to be a unique event that recognises the importance of bringing attention to the process of music making rather than just the performance end.

Officially the event has unsurprisingly sold out but organisers are urging anyone interested to get on the waiting list, and arrangements may be altered to fit in a larger audience if required.

Afternoon workshop is free, the early session is £5 and the late show is £15.

Check the Bluecoat and LIMF websites for further details and tickets.