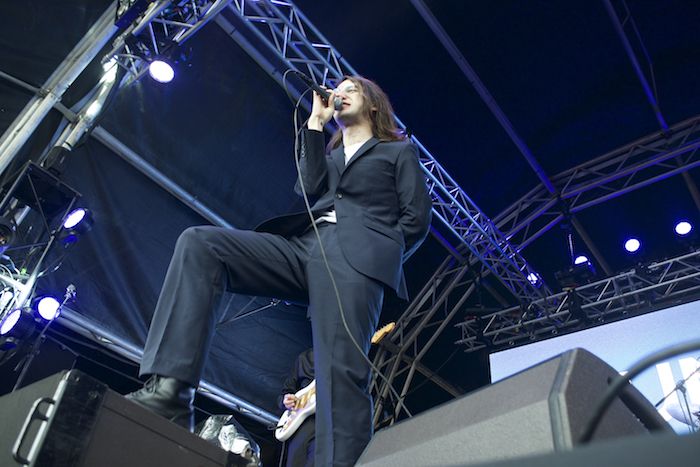 No, it’s nothing to do with new Bond film, rather a new album and upcoming tour from the marmite London four-piece. Spector, Getintothis’ Del Pike has been expecting you…

Spector have been hovering around the periphery for the last four years, and have in that time divided audiences with their vocalist Fred Macpherson’s most British of vocal deliveries (Ferry meets Moz) and their driving, catchy mini anthems.

Their first album, Enjoy It While It Lasts hung around just outside of the Top Ten in 2012, and topped the record store chart, following an arduous touring schedule. The album’s success led to further international recognition and a support slot for Suede the following year. It has taken them three years to follow up with the curiously titled Moth Boys (released through Fiction on Aug 21),  the fruits of a slow process with lead single Don’t Make Me Try emerging way back in December last year.

Early reviews indicate a darker edge to the second LP with comparisons to Editors and Ian Curtis enveloping the breezier nature of before. Consensus appears to be that Spector are on the brink of being massive, but they needed to get a step on before they became this year’s also-rans.

It’s not been an easy ride for the band with the departure of guitarist Chris Burman in 2013 and a failure to become part of the higher echelon of the indie landscape with their edgy music videos juxtaposing the upbeat nature of their music, see bespectacled studious Fred peruse the red light district in the Reeperbahn video to see what we mean.

Spector appear to have something of a cult following however, with Zane Lowe citing All The Sad Young Men as “Hottest Record in the World” and Fred enjoying the privilege of being voted ‘Villain of the Year’ in the 2012 NME polls. They appear to very much languish in their comfort zone onstage with their own unique performance style embracing the uniform and methodical with a touch of Jarvis Cocker.

Spector are calling in at the 02 Academy on October 22 as part of their 17 date Moth Boys Tour, just months after an opinion-splitting appearance at Sound City and we think they may be worth another look. If you like your indie rock ever so British and a touch eccentric then this could be just the ticket!