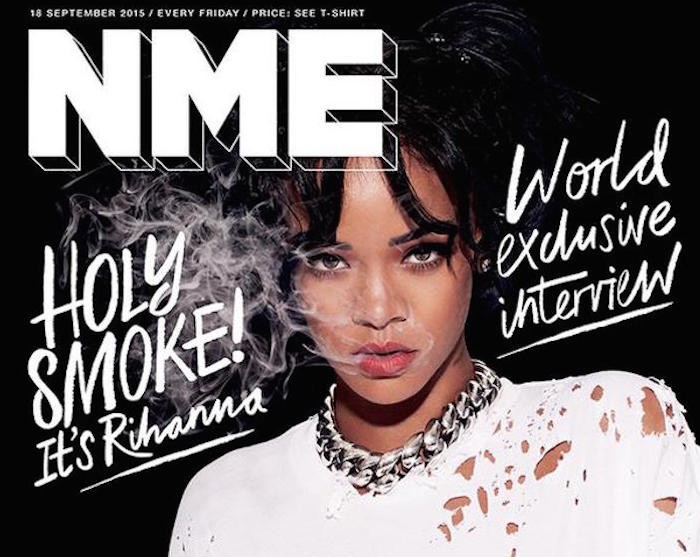 With the iconic music magazine relaunching as a free sheet this week, Getintothis’ Richard Lewis examines whether it has moved away from its indie roots.

Following the announcement that the NME was to become a free publication back in early July after years of declining circulation, the first edition of the new format hit the streets yesterday.

Re-launched in an A4 sized format, with the same glossy cover and inside print quality as before, the new front cover strapline ‘Music, Film, Style’ set out the stall for the magazine’s re-boot.

Making a bold statement in putting Rihanna on the cover (the singer’s NME debut), by highlighting one of the most recognisable and critically acclaimed pop stars on the planet seems to send out the message that the NME have shifted focus to incorporate pop and RnB in the publication.

A considerable coup for any magazine, including ones outside the music sphere, the cover article is a lengthy interview with pop scribe Peter Robinson, whose Versus column also returns (this week’s subject is John Lydon).

Moving from its traditional Wednesday publication day to Friday, NME’s relocation chimes with the music industry’s newfound focus on the end of the week, with worldwide release dates and album and singles charts recently synchronised to the same day.

Fortuitously, the NME steps into the space vacated by much admired freesheet The Fly following its demise in March 2014 when HMV went into administration. Having almost had the last rites read to them the resurgent retailer is currently vying with Amazon for biggest UK entertainment outlet, meaning the NME benefits from a strong high street platform.

Alongside this fellow retail big-hitter Topman plus over a dozen Academy venues carry the publication in addition to copies being handed out at over two dozen major railway stations, almost fifty universities and scores of Tube stations.

A mainstay on newsstands since its 1952 inception, in terms of ‘brand identity’, the NME remains one of the most instantly recognisable titles in the UK marketplace.

While publishers Time Inc decided to meet the NME’s ever-present issue of declining circulation head-on, the magazine’s contemporaries all suffered a fall in sales in the most recent Audit Bureau of Circulation figures (ABCs) which appeared last month.

While Q, Mojo and Uncut encountered slower falls in circulation than in recent years with all the publications posting sales figures north of 40,000, metal title Kerrang! fared less well, losing 16% of its sales base to bow at a lowly 27,667 copies a week.

With 300,000 copies of the NME hitting the streets, the number dwarves the 15,384 paid-for copies recorded back in February.  With 500 pick-up points stocking the magazine, the operation to get the first edition of the publication to the people has been impressive.  Liverpool has twenty-three stockists at present (Wirral currently has none as yet) with the Bold St/Slater St area festooned with pick-up points including Probe, Dig Vinyl, 3B Records, Resurrection and The Shipping Forecast amongst others, alongside the university district and the Baltic Triangle.

Returning to the inside pages, the publication’s genre-spanning new direction surfaces most clearly in the Best New Tracks Radar section which includes pop in the form of Hurts and Carly Rae Jepsen alongside more traditional NME fare like Deerhunter, DIIV and Eagles of Death Metal.

The mag haven’t mislaid their indie rock roots entirely of course, signalled by the double spread advert for (who else?) The Libertines on pages 2-3 and the lead piece on the paper’s Agenda (News) section which features Doherty & Co.

Chvrches, a band who arguably bridge the divide between the alternative and mainstream camps meanwhile, are featured as the  mag’s second big interview.

Elsewhere the film and TV sections have been boosted with a favourable comment piece on US sitcom The Big Bang Theory plus features on the imminent return of Doctor Who and an interview with This Is England ‘90 creator and film director Shane Meadows.

Also subject to a redesign is the album review section which has full length write ups on big upcoming releases by Lana Del Rey and Battles, while forthcoming LPs by Mercury Rev and Carly Rae Jepsen truncated with a footnote that the full review can be found on NME.com, in a move to drive up internet traffic.

Something that will become apparent over the coming weeks meanwhile is whether the mag has decided to broaden its remit to featuring cover stories on film and TV on a regular basis, moving away from its core music focus.

Whether the NME’s 21st century reboot will be a success will become apparent over the next few months of course, but at the very least the venerable publication deserves credit for a brave attempt at repositioning.

Find out where to pick up your copy of the new NME below.