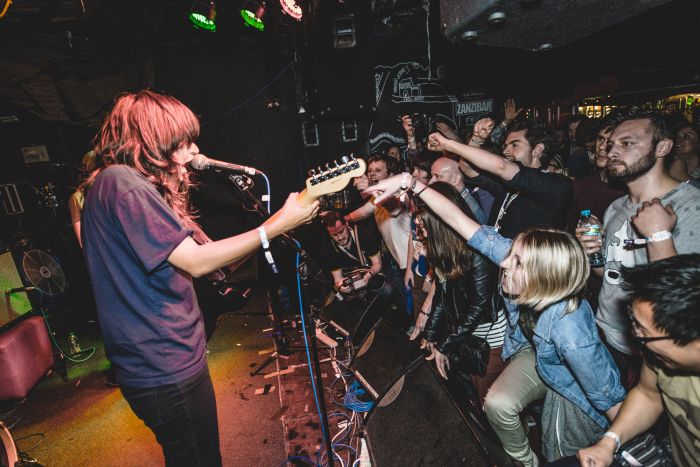 Courtney Barnett in the Zanzibar at Sound City 2014

Ahead of her forthcoming trip to the O2 Academy in December, Getintothis’ Paul Fitzgerald caught up with Courtney Barnett to discuss work ethics, writing, and that by now legendary Zanzibar gig at Sound City 2014.

May 2014. Liverpool Sound City. As the queue for the Zanzibar wormed its way up Seel Street on the Friday night, there was an almost tangible air of excitement for this most feted and eagerly anticipated show.

Inside, there was no room to move, it was hot and the air hung heavy with expectation as people jostled to get the best view. Drinks were being passed over heads from the bar to every corner of the jammed space. And still they came, adding to the heat and bringing more tension as the minutes passed. The crowd just knew this would be special. Very special indeed.

At this point, Courtney Barnett was curled up in bed; hot and cold flushes, shaking, exhausted, lethargic, with no voice, a fever, and filled with a sense of foreboding about stepping out onto that Zanzibar stage.

“I remember it so well. That’s the thing, I was really sick, my voice had gone, I felt terrible and I was really miserable and angry at myself for being so sick, and then we played this show, you know, the band had been talking all day about me losing my voice and then we went on, and it was an amazing feeling and an amazing gig.

“The crowd were so supportive, so ready for it, and the atmosphere was incredible. Within a couple of songs, the voice started to come back, and it was like real magic.

“Liverpool’s such a cool place, and the people too, they really made the show happen that night. We can’t wait to get back there.”

Read our review of Courtney Barnett’s set at the Zanzibar

The band are a closely bonded unit, that’s for sure. A tightly woven troupe, who deliver a short, sharp, stomach punch of a show every time, leaving the audience reeling like all the best bands should. They make a truly incredible noise for a simple three piece, and the dynamics to Barnett‘s writing, displaying as they do an almost awkward exuberance and launching from a stripped bare backroom simplicity to full on sonic barrage, bring thrills and delights a plenty.

“Stripping things back to the simple element is kinda important. I can overthink stuff a lot, so normally I end up taking it back down to get to the real element of something, but then, at the same time, there’s always so much to fit in, things are often complex, but I try and find the best way to work around the story.”

There is an incredible sense around this band of the entire music business willing this to happen for them. The appeal is almost universal, and the support and accolades flood in like willing punters at The Zanzibar that night.

If the exhausting and exhilariting experience of following Barnett‘s social media is anything to go by, she’s probaby the hardest working woman in showbiz. Ironic, given the frequency at which the archaic, throwaway word ‘slacker’ is bandied about whenever her name is mentioned.

It’s astonishing to think that until last year, she’d never left Australia, and that the brilliant album Sometime I Sit And Think, And Sometimes I Just Sit was only released in March of this year.

As well as the music, she runs her own label (Milk! Records), produces the artwork, and helps create the darkly comic videos, such as the one for the incredible Pedestrian At Best. She probably flies the plane too. Never stopping. Onwards, onwards, and then onwards some more.

“Ha, yeah, we get around. It’s great to see what the world looks like. The guys in the band are like my brothers, you know, and my best friends, and that just makes it all better, cos we get to do a lot, and see a lot, and doing all this with your mates is cool. We just kinda do our thing and like it when people get it.”

Barnett writes alone, filling journals and notebooks with cluster bomb lyrics and blasting ideas out, before revisiting them to work them into songs. Always attempting to see the humour in sometimes difficult themes, the writing intrigues and the ideas are often warm and amusing. There’s heavy doses of self-doubt and self-deprecation that make the stories that much more striking.

The band pick the ideas up from there, and that closeness, that tight weave of musicianship is where the magic happens. And it happens. It happened in the countless ‘were you there’ moments of last year’s Zanzibar show, and it’ll happen again at the O2 Academy on December 1.