What’s the score? Getintothis’ Anna Houghton finds out as Ady Suleiman plays to a packed out Magnet.

November 11th saw the return of Ady Suleiman, just below the pavement of Hardman Street, Ady and his band brought to The Magnet what can only be described as rhythmic poetry, simultaneously beautiful and brutally honest.

Ady casually strolled through the crowd and hopped up on to the stage, addressing the Liverpudlian audience with a beaming smile. It was clear from the offset that this was to be a form of homecoming for the Liverpool graduate.

The Magnet boasted a plentiful crowd, and it was apparent that a buzz had been built surrounding the name Ady Suleiman; despite being his first headline gig it was clear that people were expecting a lot from the Nottingham songwriter.

With two E.Ps under is belt Ady curated a varied set, from crowd pleasing sing-alongs to intimate insights into the mind of the musician, delivered in his extraordinary, warm voice. A voice, calming and smooth as velvet, reminiscent of late summer nights and the heat of sun soaked pavements.

Read our review of Ady Suleiman’s What’s The Score, here

Amidst the engrossed faces, it was obvious that old friends and family had turned out in their masses to support Ady, mouthing every word through smiles of pride, radiating a warmth, reciprocated by the energy being emitted from the stage. The band were perfectly in sync with one another, combining trumpet, guitar, keys and rhythm to create a truly unique language, which complimented Suleiman’s vocals rather than overpowering them.

Suleiman’s lyrics seemed to truly resonate with the crowd, preaching tales of love, loss and  the confusion of adolescence, with a care-free and light-hearted nature to his prose. The crowd were encouraged to join the chorus of Need Somebody to Love, and it was this unison of both the power of Ady and his band and the people, that a very real connection to what they were creating was illustrated.

Ady successfully transversed R&B to Indie eloquently, stripping back both genres and creating something extremely personal and a strong indication of the young singer-songwriters rightfully claimed place in his
assured future.

All photos by Getintothis’ Sam Rowlands 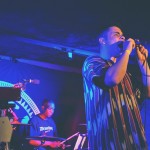 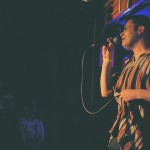 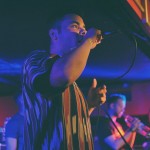 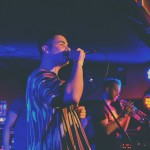 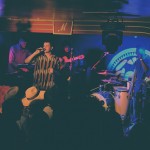 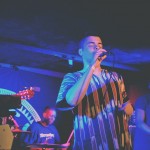 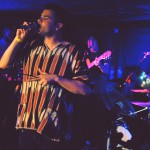 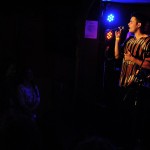