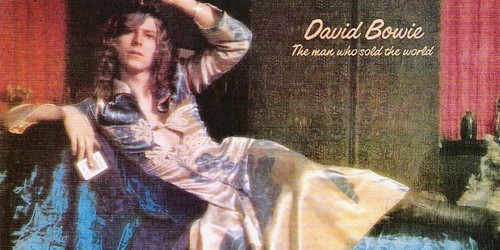 With news of a new David Bowie album still ringing in our ears, Getintothis’ David Hall revisits, re-evaluates and reappraises Bowie’s game-changing The Man Who Sold the World, ahead of its 45th anniversary.

The Man Who Sold the World is a dense and rather unwelcoming listen. Its mood and themes are uniformly dark, the sonic palette abrasive and uncompromising, and there are few identifiable choruses. Most songs unfold along one linear path, rather than looping around in conventional pop music structures as prosaic as verse-chorus-verse.

What then is the attraction? For all of its seemingly off-putting elements, what makes David Bowie’s third studio album so strangely beguiling, and the definite point from which his career began to bloom?

For a start, its overall sound is unique in the Bowie oeuvre. The overarching aesthetic of the album inhabits the strange place where embryonic heavy metal, the folksier end of the blues spectrum, and what we contemporarily refer to as classic rock all meet. There are certainly Sabbath-like electric blues influences in drummer Woody Woodmansey’s rolling tom-toms, and also some thumping Ginger Baker-esque fills on the low-end pieces of his kit. But Mick Ronson’s tirelessly imaginative playing, with chord positions high up on his guitar’s neck, recall the R&B licks of Led Zeppelin at their most rootsy and freeflowing. All of Bowie’s backing band he had long sought to assemble are consistently impressive, but none more so than close collaborator Tony Visconti, pulling a double shift as producer and delivering a stunning bass guitar performance throughout.

Barely repeating itself through an imposingly freeform eight minutes which takes some effort and repeat listens to unpick, The Width of a Circle is a handily microcosmic introduction to The Man Who Sold the World. It sounds like a truly collaborative effort on an album where Bowie’s band are in the driving seat for the most part. Here, even Woodmansey’s frenetic kick drum patterns seem to alter bar after bar, Ronson’s guitar streaks through multiple keys and Bowie’s loosely-strummed acoustic adds texture, the arrangement being constantly dragged this way and that by Visconti’s mobile basslines.

But then at roughly the 3:40 mark the track alters entirely, slowing amid an echoing vocal figure, before ending with what could be pointed to as one of the most identifiably trademark glam-rock-era-Bowie passages of the album. “Breathe, breathe, breathe deeply” the singer encourages over a stop-start stomp, taking centre stage for one of Man Who Sold the World’s rare moments that definitely sounds like his record.

There are certainly some defiantly un-Bowie-esque moments contained here, exemplified by hardest rocker She Shook Me Cold, beginning from a wah-wah infused Hendrix-like guitar riff it skyrockets into a guitar-bass-drums freakout. The Ronson–Woodmansey–Visconti power trio is further showcased on Black Country Rock, with an uninterested Bowie phoning in seven lines of lyrics that simply repeat time after time. Overall it comes across as a jam that was too good not to make the cut, with a sparse set of barely-discernible Bowie fingerprints on it.

Saviour Machine, in contrast, could almost fit straight onto Diamond Dogs with its dystopian lyrics concerning a computer of omniscient intelligence, all swirling synths and blunt guitar textures, lacking only that incisive chorus that, as mentioned earlier, eludes Bowie more often than not on this record.

Stylistically the album presents a united front, but the jammy, cavernous and often-impenetrable affair of The Man Who Sold the World as a whole is entirely at odds with its lean title track, the best-known song and arguably sole recognisable single on offer here.

With its ethereal chord changes, eastern-sounding lead guitar line and enigmatic scale climbs, The Man Who Sold the World is the exception to its parent album’s rule. It stands out precisely because of its sparseness, haunted keys tottering between chords over simple acoustic guitar and scraped, quiet percussion. Bowie schizophrenically adopts a pair of characters, from the delayed, echoing narrator’s voice in the track’s verses to the titular ‘man who sold the world’ in the choruses. “Who knows? Not me! We never lost control…”, his higher-register counterpart smirks sinisterly, like a dark, knowing reflection acting independently of its source. That climbing chorus riff – a C scale ascending a couple of octaves – cloaks those characters almost uncomfortably, its weirdness yielded by the lead guitar and bass escalating hand-in-hand in a mocking dance of death.

Anyone looking for an easy in away from the title track would be hard-pressed to do so, but All the Madmen could fulfil the wishes of those with an open mind. It’s everything that the title track isn’t; brashly loud, its narrative overtly sinister, and loosely arranged with multitracked recorder melodies, all daubed with Bowie’s impressionistic lyrics (are the “friends sent away” real, or figments of the narrator’s imagination?). He delivers an impressive vocal performance, as Visconti’s characteristically meandering bass wanders the band through the track’s wonderfully evolving phases.

There are moments and signposts of the theatrical genius that Bowie would become known for here, “I’m not quite right at all,” he sings, before pointedly asking askance, “Am I?” in the first pre-chorus. Overall, it winds up nicely, standing amongst the album’s most considered creations. As a Moog pans across the mix late on to add that final layer to a clearly demarked chorus, All the Madmen builds to a satisfying crescendo.

By contrast other songs appear to occupy a single, undernourished plane, like the disquieting, Crowley-quoting After All; its “oh by jingo” schtick sounds a little dated today, which is unfortunate as the rest of the track is strong. Bowie’s lyrics at this point in his career came across at times as overwritten; certainly they were conspicuously, distractingly elaborate on several tracks spanning Man Who Sold the World and Hunky Dory. Never more so than with his Nietzschian pre-occupation on After All and The Supermen, his barked, almost quacking vocal machinegunning over the latter’s ludicrously-pounded kettle drums and overblown choral chant combining to near-overpowering effect.

The Supermen’s H.P. Lovecraft influence has long been bandied about by Bowie commentators; it’s a loose fit really, but subject matter of deathless elder gods and themes of “nightmare dreams no mortal mind could hold” certainly recall Lovecraft’s writing. Ironically, mentions of “mountain magic heavy hung” recall the author’s earlier, romanticism-inspired ‘dream cycle’ output, itself accused of an overly busy writing style which he pared down in his later work. It’s precisely because of this wordiness that Bowie’s closing track never quite reaches the heights required, and collapses under its own gravity somewhat.

Typical of his early period, The Man Who Sold the World sees Bowie wrestling with the various influences which pushed and pulled at him. The twenty-three-year-old knew clearly that he wanted to be a musician, but it was equally plain after three very different albums that he didn’t know where his key strengths lay. Man Who Sold the World was the best effort he had made in working this out. It doesn’t form a cogent whole – lacking the requisite dimension in places – but even Hunky Dory, one of his best-regarded records, isn’t without its low points. Both albums also house certain pastoral-sounding sections which sail close to the pointy-hatted prog rock wind, flirting with one of the few genres that Bowie has failed to openly explore. The impression is gained that the dalliance here is all we needed.

What then can The Man Who Sold the World teach us, and what did it teach Bowie at the time? Well, this science fiction-enthused album was just what he needed at the time; a work of substance, a lean collection of songs, unified thematically and texturally, without a cover version in sight.

Bowie’s sci-fi penchant first explored here would also resurface time and again across his career. It’s interesting as an aside that the overall atmosphere resonates heavily with The Man Who Fell to Earth, Bowie’s acting debut of just a few years later. Playing on similarly disconcerting themes of alienation as the album, Nicolas Roeg deftly directs Bowie as a human-looking extraterrestrial, who is either a wildly gifted individual ensconced in a drugged-up, paranoid delusion entirely of his own creation, or really is an alien.

The image latterly painted of Bowie during Man Who Sold the World’s recording sessions – reclined on a sofa in almost Oscar Wilde-esque fashion (wearing the same dress in which he appears on the cover?), gazing upon the nascent Spiders From Mars, before reluctantly, melodramatically rising to perform his vocal – is certainly an alluring one. Although it remains a point of contention just how minimal Bowie’s writing input was – lower than average, but with his usual telling presence, one suspects – but his role of aloof conductor worked well. For all of the album’s serious, weighty themes, The Man Who Sold the World is a playground for its performers. Bowie was revelling in his role of maestro, assembling the band he long envisaged himself fronting, and allowing them free reign in the compositions found here.

Does all this result in Bowie’s magnum opus? Sadly but inarguably, the answer is no; but The Man Who Sold the World was certainly his career best at the time, and the first glimpse of a waterline that rose and rose until the mid-80s.

David Bowie’s The Man Who Sold the World celebrates the 45th anniversary of its release on November 4.