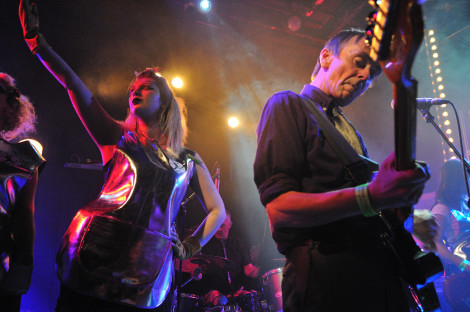 The question had been on everyone’s lips all evening: would anyone step up and delight every 1980s child present by belting out Magic Dance?
When Married to the Sea strutted on stage in the headline slot, frontman Nick Ducketts kitted out in Labyrinth leggings and looking very much the Goblin King dandy, all the signs said it was surely close.
After delivering a shimmering take on Modern Love the band cast their magic spell, even chucking a doll into the crowd if anyone needed reminding of the babe. They brought things to a close with a triumphant Starman as those not staying on to boogie to some Gold Soundz left gazing into the night sky.
Their short set and all of those that came before showed once again why the venue’s quarterly (ish) house night is such a simple and brilliant concept. 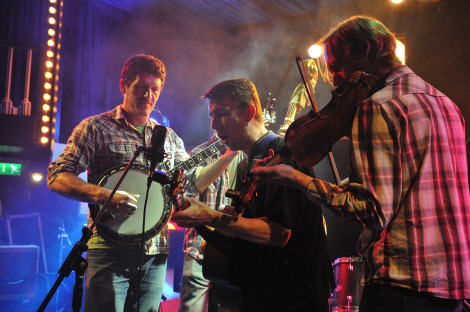 The Loose Moose String Band were diamond top dogs at the Kazimier
10 bands play for 10 minutes, knocking out a track or two of their own and a classic or two from one particular artist. If you don’t like a tune, your probably won’t have to wait long for another you love.
Tonight it was the turn of the Thin White Duke to get the Kazimier treatment. Getintothis arrived just as the last tones of Nadine Carina‘s ghostly Ladyhawke howls, sparse synths and spacious beats were fading out.
Kill The Young teased with a seemingly impromptu rendition of timeless lament Little Fat Man from Bowie’s turn on Extras before snarling their way through some of their own material, all BRMC vocals and filthy Black Keys licks. They signed off with The Man Who Sold The World, in a neat fit Nirvana style.
Next up were the Harlequin Dynamite Marching Band who transformed the liquid funk of Fame into an oompah-tastic treat, followed by Hilary and the Democrats who set off a melodramatic moshpit as a few down the front threw thespian shapes to Changes and a strong, bass-led Let’s Dance.
Clang Boom Steam were another highlight, beefing up China Girl with thunderous indie thrashes and hitting some falsetto flourishes to give Ashes to Ashes an Everything Everything touch.
The Loose Moose String Band surrounded the mic to good effect for Sorrow, Bowie’s Pin Ups cover of the Merseybeat classic, after injecting some hillbilly swing into a roof-raising R Kelly‘s Ignition.
Hawk Eyes ripped into a high octane Queen Bitch before Pete Bentham and The Dinner Ladies – complete with suitably sparkly aprons – rocked, rolled and seemingly Macarena’d their way through enjoyable takes on The Jean Genie and Suffragette City.
It might not quite have hit the heights of the superlative Fleetwood Mac night back in January, but this was another special instalment of a Liverpool music gem.
Further reading on Getintothis
Top 10 tracks – David Bowie.
Ten Bands Ten Minutes – Fleetwood Mac: The Kazimier, Liverpool.
Ten Bands Ten Minutes – Fleetwood Mac – picture gallery: The Kazimier, Liverpool.