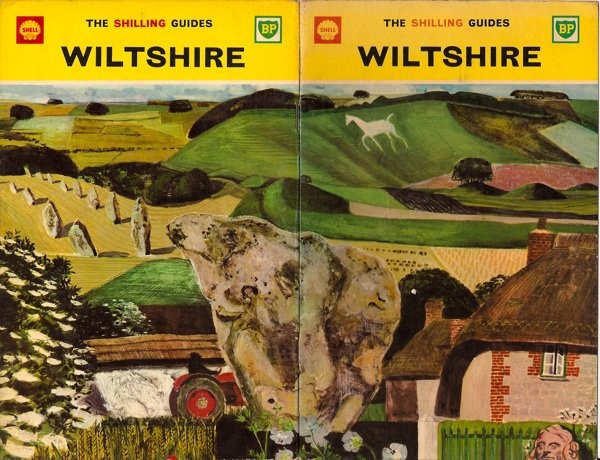 October 2015 saw the 10th anniversary celebrations of the hauntology record label Ghost Box; a fragmentary musical world existing somewhere between a darkly parallel 1970s universe, educational Radiophonica, and counter-culture occultism. The label, holders of some of the most interesting artists in British electronica – including The Advisory Circle, The Focus Group, and Belbury Poly – have had a far more defined aesthetic ideal than most independent labels, with the desire being to be “…not just a record label but an imaginary world“. With this in mind, it was surprising to find so much of the coverage surrounding the anniversary almost devoid of attention towards the visual and thematic content of this world, created through the overall package of each record.

Label co-founder, Focus Group attendee, and chief cover artist Julian House has often mentioned the influence of old Pelican and Penguin books upon his ubiquitous artwork as well as emphasising its importance as a setting.  To truly appreciate the world of Ghost Box, the landscape in which they set so much of their music should be recognised as integral to the whole, as it is built from an array of cultural artefacts and shards from the darker side of post-war pop culture. This slips as well between perceptive illusions towards Foucauldian Heterotopias and shockingly genuine recreations of the eerie within the sociology of 1970s Britain in particular. There is, therefore, a definite topography to the label and its music, varying in setting towards both rural and urban locales depending on the artist in question.

Ghost Box have taken advantage of building upon the natural and startlingly iniquitous pathways often furrowed for family television and education from this period. This was the era of ultra-violent public information films, of educational Radiophonic records with morbid, bleak poetry, and constant spurts of horror in television such as Doctor Who (1963-1989), Children Of The Stones (1977), The Tomorrow People (1973), and The Owl Service (1969). The populism of magic(k) and esoterica seems, in hindsight, to have found its way into almost every possible form, from boxes of Sainsbury’s Corn Flakes resembling Summerisle suns to Play School presenters releasing pagan folk records. 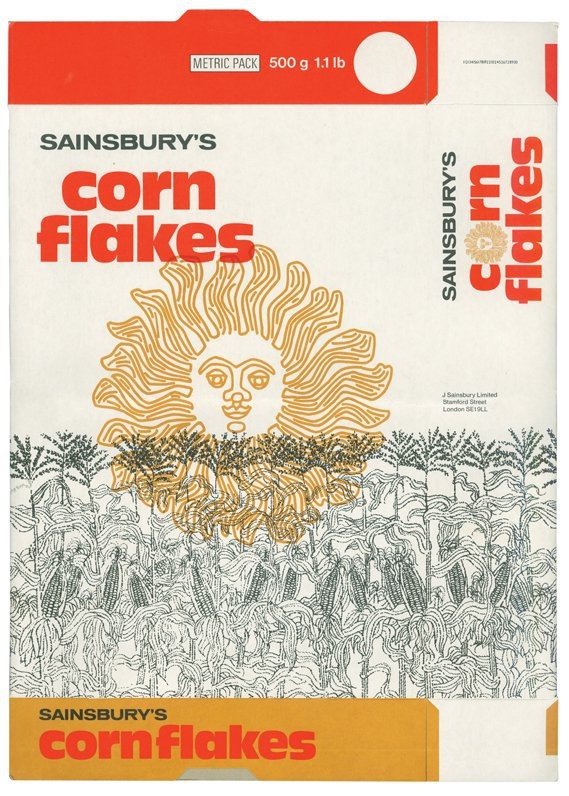 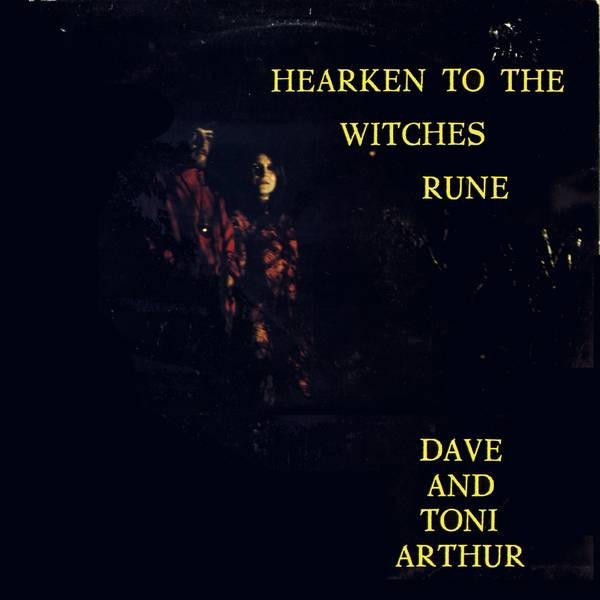 Hearken to the Witches’ Rune

The music is of equal emphasis, calling to mind the almost constant source of Radiophonic Workshop music produced in the decade for all sorts of programs. Think of Jonathan Miller‘s science series The Body In Question (1978); an educational science program that mixed factual documentary with radiophonic sounds and graphics that are arguably far more surreal than many contemporary video installations.  This is the typical raw material absorbed by Ghost Box and recontextualised into something both humorous and eerily nostalgic. 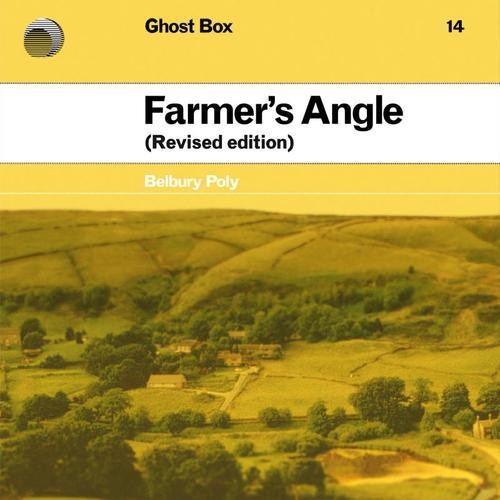 This sense of education being a viable ground for fertile creativity is one of the enjoyable aspects of the label in how it markets itself. When it releases collaborative 7″ singles, the designs are not only strictly serialised but are also a “Study Series” rather than simply a range of records. These singles all have a strange portal onto some untold landscape, depicted in abstract form. What can be learned from these design decisions is debatable though they act as further detail within the world that Ghost Box wish to create.

Unlike its more sinister cousin, Scarfolk, Ghost Box takes enjoyment in the nostalgia, the “past visions of the future” as they are sometimes referred to. The landscape inferred by such decisions also brings to mind more urban areas: think of disintegrating inner-city classrooms in brutalist shells, the concrete, Ballardian cityscapes of Stevenage in Here We Go Round The Mulberry Bush (1967) and Walton-On-Thames in Psychomania (1971), or the empty edgelands escaped to after the finishing bell has tolled.

In other words, much of Ghost Box‘s earlier output is the social and topographical vision of a landscape skewed by the surreal aesthetics of faux-educational material. They are the visions of landscapes that have been augmented in an attempt to make them palatable through electronic means and this brings forth the more uncanny elements of the work; as if the label has nipped into a parallel universe and found a world both startlingly different but at the same time uncomfortably recognisable.

The Advisory Circle‘s Mind How You Go (2005) exemplifies this perfectly as it genuinely feels like the soundtrack from a series of information films warning of the dangers of wayward journeys towards nuclear substations after a day in the classroom learning about “Everyday Science“.

The Advisory Circle works especially well with this form, symbolising a mixture of cult television and the landscapes where they were set: on records like As The Crow Flies (2011), in referencing “Unforgotten Paths” that are “Beyond The Wychelm” and of course careful to remind of the “Everyday Hazards“. 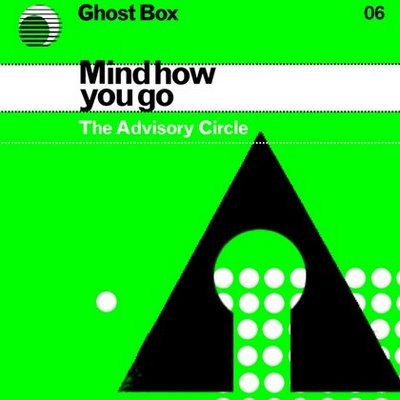 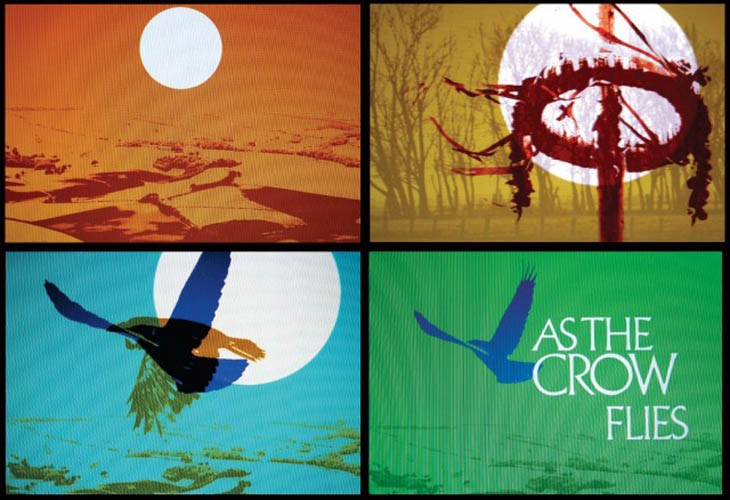 As the Crow Flies

Belbury Poly also enter this realm regularly, with Farmer’s Angle perhaps having the unique status of being the only EP to have a song that effectively samples the soundtrack from the failed pilot TV show, K9 and Company (1981). Again, it is the pop culture aimed at family audiences that comes to the fore, but also often highlighting the frankly barmy themes that were decided as suitable for mainstream audiences in this period.

This maybe explains why such features as menhir, forests and other common imagery from folk horror television are present on album covers such as The Belbury Tales (2012) (which invokes a local village churchyard), or From An Ancient Star (2009) (which features the ever-present image of a stone circle). These are places regularly featured and found in a huge range of television but also horror cinema from the late 1960s and early 1970s. 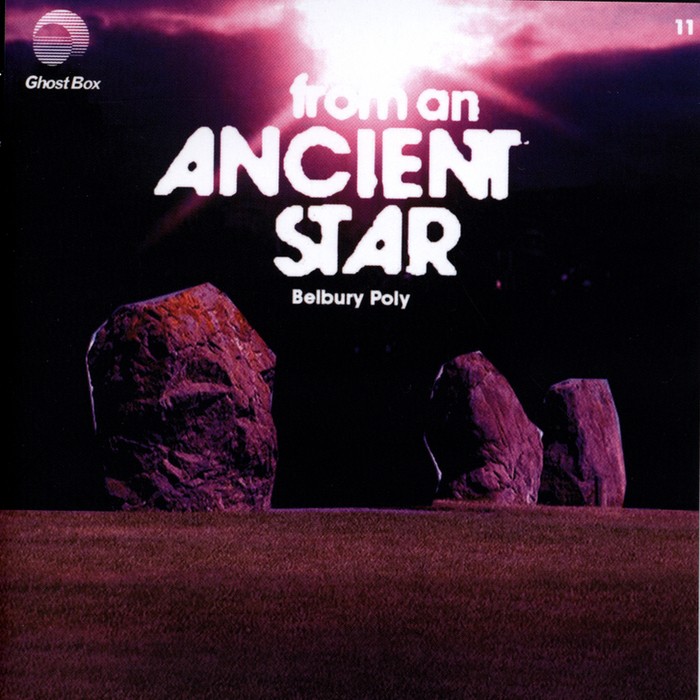 From an Ancient Star 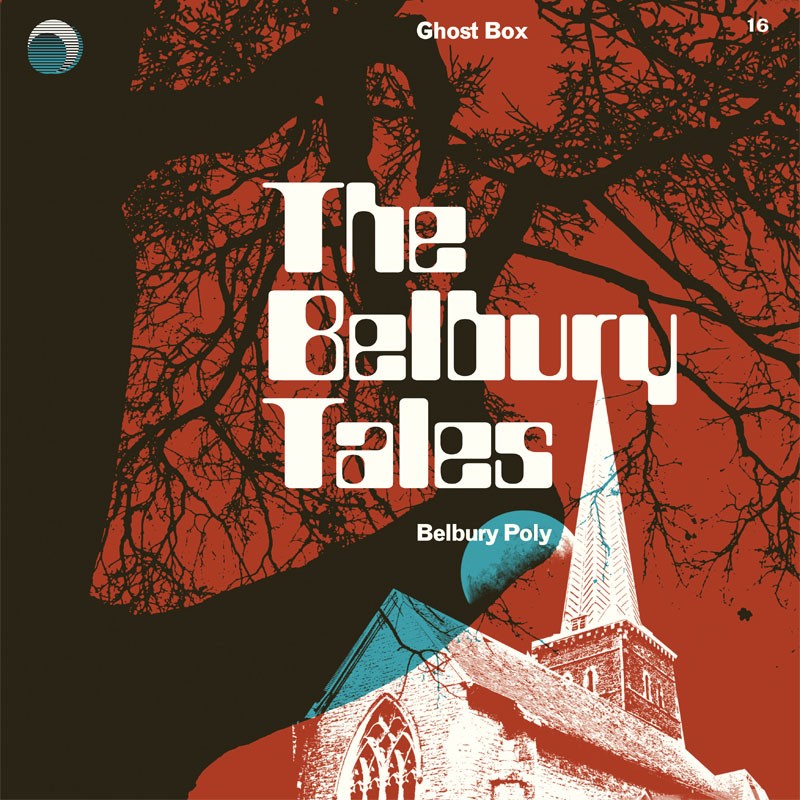 The work of writer Alan Garner and his obsession with landscape seems to loom large, as does the influence of Nigel Kneale and M.R. James; the former being prolific in regular “wyrd” dramas, the latter being heavily adapted for the BBC‘s regular Christmas Ghost Story slot. Again, both rely on varied landscape emphases and therefore subtle reference points can be made by simply evoking their sense of place. When Ghost Box reissued Séance At Hob’s Lane (2001) by Mount Vernon Arts Lab, it made perfect sense in this context as it presented both a homage to Kneale‘s Quatermass And The Pit as well as providing a psychogeographical route into the artwork through its claustrophobic recreation of London. 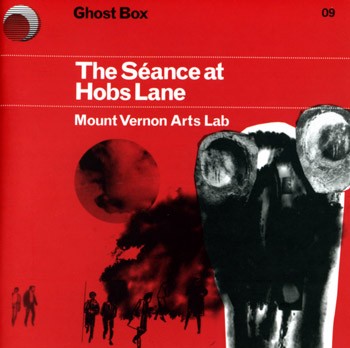 The Seance and Hobs Lane 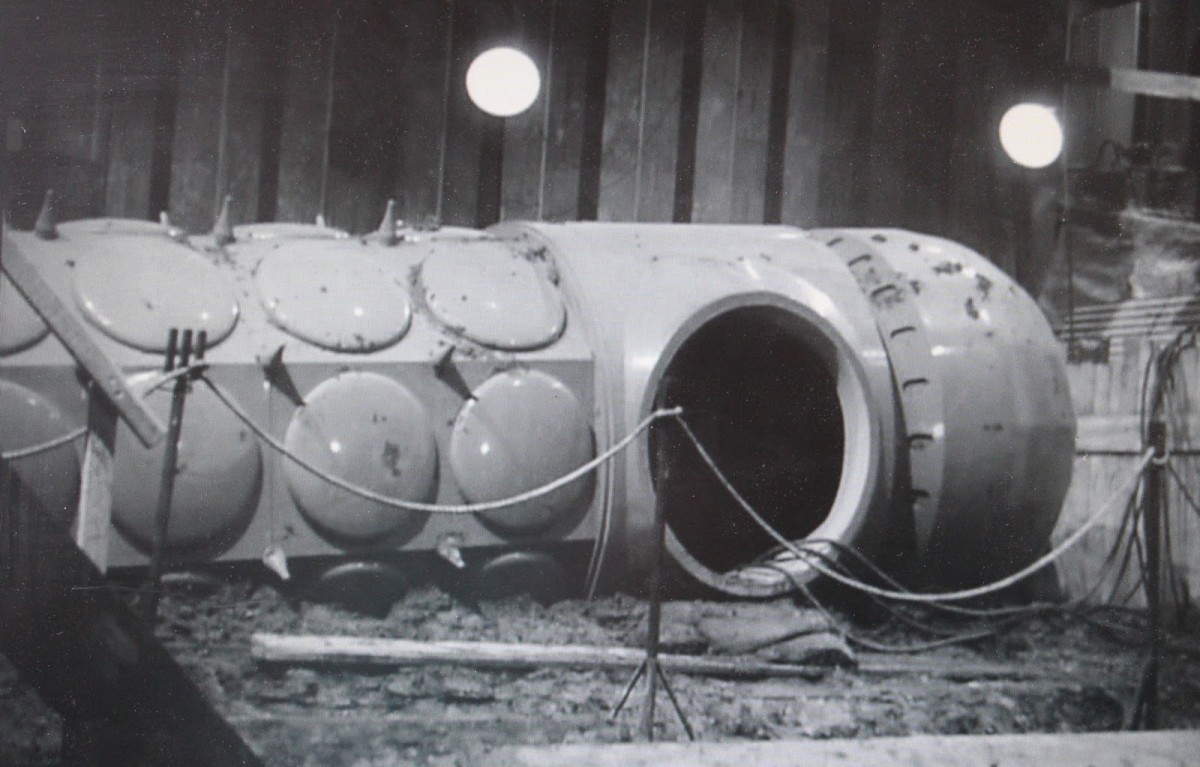 Quatermass and the Pit

These reference points begin to blur as the label gains momentum, opting for its own spin on such realms and moving more openly from the varied rural locales to more obviously urbane, Ballardian territory. The Focus Group built upon this especially, moving away from earlier works about educational magic and towards the strange brutalist backdrops for counter-culture populism.

The Elektrik Karousel (2013) and We Are All Pan’s People (2007) evoke this sense of both swinging optimism, white-collar Oxbridge graduates debating a séance after a day’s work in TVC at Wood Lane, and the darker foreboding to come; as if throwing an occult spanner into the works of sleazy Soho, home of the “Kinky Korner Klub” and other odd paraphernalia.

This is the same universe where Adam Adamant (1966) fights camp corporate marketing executives on a weekly basis before scooting away in his Mini Cooper, or where there’s grease on the cutlery in early British sexploitation cinema such as London In The Raw (1965) or Primitive London (1966). They all exist in the same world, butted up together. 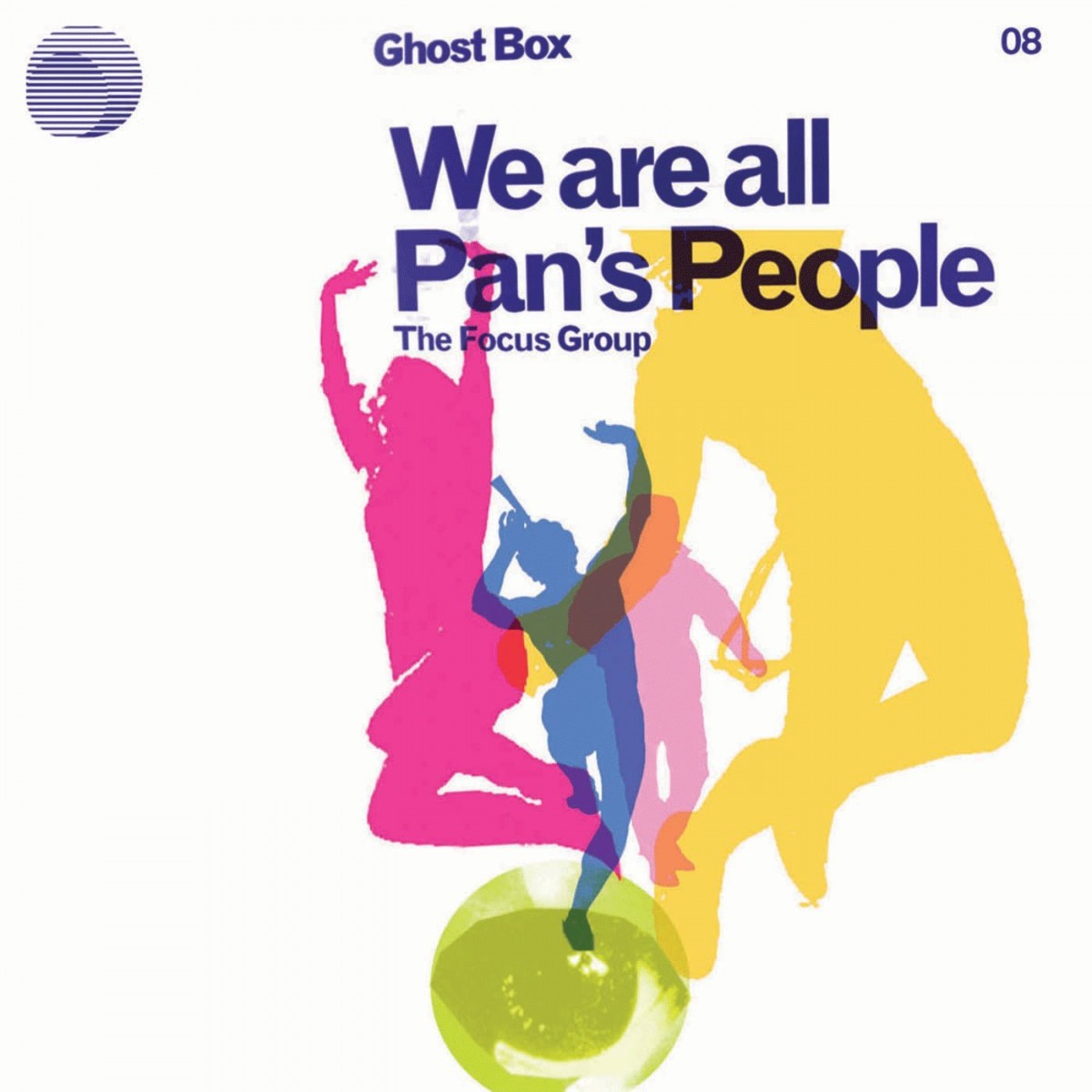 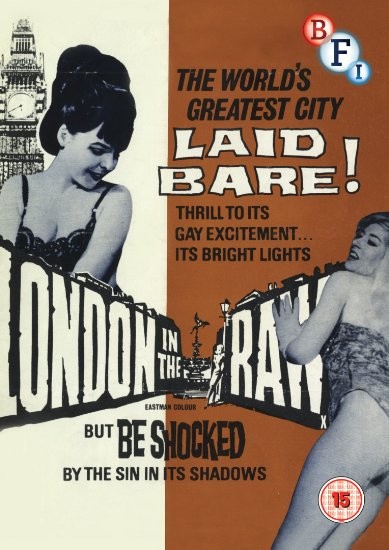 The most obviously Ballardian of this facet comes in Pye Corner Audio‘s only release on the label, Sleep Games (2012). This presents the newly urbanised landscape but not as some new promised land as was the spiel spun by the governments at the time, but as a strangely odd and empty place; the same space where Kubrick could film his Droogs wandering about without even needing to build a futuristic, dystopian set.

In a sense, Sleep Games feels like the label coming full circle in the feel of a journey, where the beginnings in educational establishments, polytechnics and the like have traversed through the fictionalised worlds of the period’s ruralist fantasy culture but come back down to earth with bang into the soon-to-be depredated estates; where prams are left empty and walking around after 9 o’clock is inadvisable for fear of occult doom gangs high on “Nostalgia Pills”.

This article can only scratch the surface of the strange, fluctuating world of Ghost Box. The audio plays a huge part in creating this multitudinous landscape but the label’s output is one that is explicitly audio-visual in its overall effect. From forgotten edgelands and forests full of ghosts and daemons, to high-rise towers, substations and concrete vistas, Ghost Box has created a world that is vivid and tangible by churning up our own skewed visions of the past and feeding them back to us with an added emphasis on what was taken for granted.

They play perfectly on what is now a set of dormant cultural race memories, drawing upon popular culture’s Freudian ability to create the uncanny; allowing our memories once disregarded and shelved to be joyfully reclaimed.  Mind how you go now.