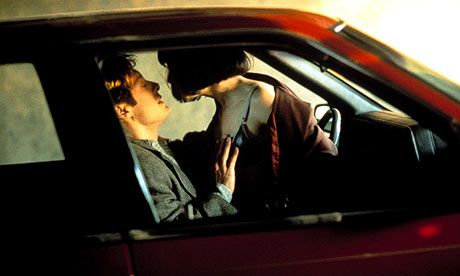 With his work anticipating the concrete horrors of the 1980s, Getintothis Adam Scovell considers the influence of JG Ballard on popular music and Ultravox’s John Foxx in particular.

The writing of JG Ballard has had an enormous influence on popular music. From Joy Division to Burial, the short stories and novels of the writer have acted as a profound aesthetic and thematic guide for many musicians as well as artists and filmmakers (with Ben Wheatley releasing an adaptation of High Rise later this year). For a man who claimed to never own any form of music playback technology or hi-fi system, this is clearly some feat.

Yet, out of all of these artists, one stands out in particular for taking Ballard‘s ideas to such an extreme of heart that the connection between the two is now impossible to separate: that artist is former Ultravox singer, John Foxx.

After leaving Ultravox in 1980, Foxx embarked on a richly layered solo career, the first foray of which, the 1980 album Metamatic, is the most Ballardian of musical outputs perhaps ever conceived. Like many of the artists spawned by the New Wave, Foxx had immersed himself in Ballard‘s writing of the 1970s and the controversial ideas first tapped into by the writer found a new and eager audience in the sub-culture movements around Punk.

Perhaps there was also a sense of kindred rebellion between Ballard and such movements in that their work was often provocative but chastised by the media and subject to a hypocritical slice of moral outrage. In this regard, Ballard had in fact suffered more than the musicians he inspired and while bands were subject to BBC bans and various Mary Whitehouse-isms, they failed to compare to the attempts to shut Ballard‘s writing down. A bookshop in Brighton was famously prosecuted for selling a zine edition of the “Why I Want To Fuck Ronald Regan” chapter of The Atrocity Exhibition (1970); as an artist and writer, he was causing moral alarm on a level that most musicians aspired and largely failed to emulate.

Metamatic is far more placid than this suggested outrage. By the time Foxx released his album, Ballard‘s ideas seemed to ascend beyond prophetic and instead resembled early blueprints for 1980s neo-liberal British society; a horrific embracing of the sociological possibilities that technology and concrete squeezed into existence. So often, the role of different applications of technology to music is seen with a general negativity at first to the more guitar-centric of audiences (see this year’s Glastonbury coverage surrounding Kanye West‘s headline slot for example) but Foxx uses Ballard and his writing to subvert this within the album, making the most of the new electronic textures and highlighting its ability to convey the human experience as technology was itself morphing it.

The first thing that instantly channels this is the album’s cover which shows Foxx reaching out to touch an inexplicable square of bright light. Ballard‘s 1970s writing in particular was obsessed with finding new methods of physical and emotional connection that, contrary to received wisdom, technomania could afford. Foxx is reaching out curiously to the clearly powerful and potentially dangerous object in the same way that Vaughan and James reach new sexual and emotional heights through the fetish of vehicle accidents in Crash (1973); the new technology is dangerous but has an alarming allure to its shininess, its power to tear the epidermis off our sexuality, and its ability to reflect our most perverse and pleasurable tendencies.

The album’s musicality also follows suit, at first appearing almost robotic but then allowing a fusion of man and man-made to form a new graft of organic and metallic ideas. Instead of the car being the focus of desire, it is now the synthesiser, mimicking musicality in such a way as to mock it far more than Punk ever could – its unquestioned allegiance to the band format set-up of guitars, bass and drums established from the very beginning of post-war popular music being absolute. Within this musicality also sits several attempts at Ballardian soundworlds (something which Foxx would continue to experiment with, more recently with Tiny Colour Movies) where electronic soundscapes seem to be attempting to recreate the white noise of the every day.

In Underpass, the opening sounds feel like the noise pollution in these new zones of habitat; a combination of engines, the hum of industry and writhing of life adapting to a new greyness. It also reflects a common Ballardian influence on music from his short story, The Sound-Sweep (1960), where music has been abandoned and replaced with “ultrasonic music” because of the new environment’s ability to hold and capture sound, requiring the need of a literal removal in the same way as removing rubbish from the streets.

What would music sound like if all sound manifested in a physical waste that required such removal? Foxx underscores the melodies of his album with textures that subtly ask these questions and states as much in an interview with a specialist Ballard website, Ballardian:

“An intimate knowledge of urban ambiences is a joy as deep as anything in Green Nature. I have a fascination with Grey Nature, or Technicolor Nature – ecologies are emerging which are as subtle as anything Green.”

The most obvious influence of Ballard on the album comes in Foxx‘s lyrics, the majority of which channel the strange worlds of the abandoned 1970s edge-spaces, especially those set around Ballard‘s hometown of Shepperton. No One Driving highlights this best, channelling both Crash and The Unlimited Dream-Company (1979). The second verse is as follows:

Someone’s gone liquid in the sheets
A sudden smell of burning leaves
The old streets overgrown
Somewhere else to go
It’s just another switchback can’t we fade?

In The Unlimited Dream Company, Ballard transforms his home town into an overgrown realm of exotica and strange sexual encounters, clearly being channelled here by Foxx‘s lyrics. The theme of physical change to both the human and the urban landscape is a reoccurring theme that Foxx also recapitulates. In Tidal Wave, he recalls b’s novel, The Drowned World (1962), where a future London is submerged underwater thanks to the melting of the polar ice caps:

Like many of Ballard‘s characters, Foxx‘s lyrics suggest a pleasure being taken in the rapture of total chaos, whether that of the destruction of the planet or of the physical self. It is fitting that the first two singles from the album were Underpass and No One Driving because the pair work as a mission statement, almost in the same way that the “Crash!” chapter of The Atrocity Exhibition begins the process of questioning the normative reactions to everyday horror and mutilation that eventually led to Crash as a novel.

Foxx also channels the geography of the human body that Ballard developed an interest in from his medical days at Cambridge. Ballard provides just as many maps of the human body (in often disturbingly graphic detail) as the urban areas the bodies move within. Foxx develops this in a number of lyrics from “He’s an angle, she’s a tangent” from He’s A Liquid to “Male Caucasian, Pattern scarring, Domestic gestures just like mine, Kennedy hairline, Remix features, Someone pushing through my outline.” from 030. The level of detail achieved in these simple short blasts of lyrics is staggering and highlights the clinical preoccupations of the writer in small sound-bites.

This can only be a brief dive into what is an extremely complex album influenced by a writer of equally complex fiction. Foxx would continue to channel Ballard‘s work within his solo albums, even going so far as to very earnestly create a Ballard soundtrack in his 2014 album B-Movie (Ballard Video Neuronica) for an audio-visual project with the artist, Karborn.

Yet, it is Metamatic that really channels the true sense of Ballard, perhaps because Foxx was living in the same cultural reservoirs that acted as the writer’s inspiration. Those places of concrete tendrils and suburban plazas extending over wastelands and edge spaces now lost through the homogenisation of the capital are captured in both Ballard‘s writing and Foxx‘s music; now built over with a One Show faux optimism of middle class self-delusion that masks a grim and latent eroticism metastasising the flesh to the metal.