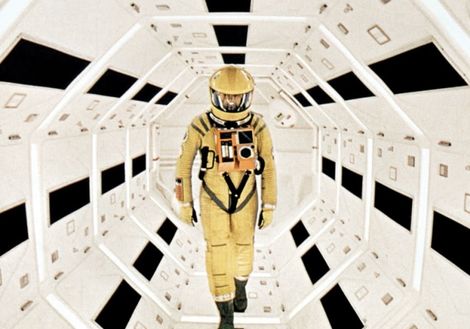 Inspired by FACT’s new Science Fiction season, Getintothis’ Paul Baker discovers the darker side of sci-fi’s relationship with deep space, the synthesiser, and the silver screen.

Science Fiction eh? It’s all just robots and flying saucers, forbidden planets and ludicrous time travelling isn’t it? And all set to dodgy synth effects!
Certainly, Getintothis‘ initial thoughts on writing a piece about science fiction’s relationship with film and music brought to mind the haunting sound of a theramin, signalling a UFO passing overhead, or else a Moog keyboard lowing dangerously to accompany the creeping tendrils of some sinister alien lifeform.
Assuming such stereotypes are locked into all our heads, it seems thoughts of science fiction in movies are consciously coupled to a set of musical sounds and effects, and it remains hard to separate the two. Both outer space and the strange, otherworldly, look of a future Earth seem to fit with sounds that seem unusual, unfamiliar, disconcerting and new.

An imagined futuristic place or race, brought to life on celluloid, required synthesised, robotic, electronic accompaniment. As such, early pioneers of synthesised music were called on to provide futuristic soundtracks to science fiction films – from the theramin-fuelled B-Movies of the 1950s, to the synth-heavy space creepers that arrived after Stanley Kubrick’s 2001: A Space Odyssey.
2001 is an interesting launch point for this discussion. Kubrick famously uses classical pieces – such as Johann Strauss‘ Blue Danube Waltz and Richard Strauss‘ tone poem Thus Spoke Zarathustra, along with modernist experimental classical works – in order to fill the lonely silences that fall between spoken words out in the depths of space.
In his debut feature Dark Star – a cult spoof of Kubrick‘s masterpiece – director John Carpenter jettisons the Straussian grandeur of 2001 out of the nearest airlock. Instead Carpenter employs a good-ole redneck country song as his film’s theme tune, while writing his own influential synth score to soundtrack the remainder of the strange happenings that occur on board the deep space scouting vessel Dark Star.
Carpenter‘s original synth scores have become almost as famous as his movies, with the likes of Assault on Precinct 13 and Halloween having suitably memorable and menacing synthesiser-driven music veining the work. Still, it was on debut feature Dark Star that he established his template.
Dark Star is a fascinating piece of sci-fi history, re-imagining the sleek interstellar vessels of Star Trek and 2001 as student bedsits, populated by stoned-out young men too bored with the tedium of life in deep space to care about personal hygiene or computer warnings of malfunctions on board ship. It would inspire future space travelling rust-buckets from the Millennium Falcon to Red Dwarf.

Dark Star also succeeded in injecting humour into science-fiction long before The Hitchhiker’s Guide to the Galaxy, thanks to scenes where the crew talk a sentient bomb out of exploding by discussing Descartes and existential doubt, alongside slapstick capers with an inflatable alien beach ball-like creature with terrifying feet!
As an aside, the alien beach ball scenes in Dark Star turned out to be quite significant for wider cinema. The scriptwriter, Dan O’Bannon, used these initially comic scenes – in which the escaped alien life form is tracked around the corridors of the ship, threatening to attack the hapless crew members – as the basis for his next, much darker sci-fi script, titled simply Alien.
Now, it was the recent opening of FACT‘s new exhibition Science Fiction: New Death which inspired this article. The exhibition is a combination of text and ideas from author China Mieville with artistic design from those clever bods over at The Kazimier.
Interestingly, FACT‘s exhibition looks beyond the sci-fi of aliens and deep space to consider the idea of social dystopia, and whether we may have already stumbled unwittingly, through the relationships and communities we have invented through our computer screens and mobile phones, into the sort of society once imagined as science fiction.
Which leads us to consider how to score the movie soundtrack of a sci-fi dystopia?
Interestingly, Kubrick himself opted to embrace a synthesised score for his next science-fiction – a dystopian tale rooted in a not-too distant future where youth has been allowed to run wild, it’s chief interest being drugs, rape and ultraviolence.

A Clockwork Orange‘s real horror, just like in Orwell‘s 1984 – itself later brought to the big screen – is in its scenes involving the rehabilitation of offenders through state-sanctioned psychological torture.
Kubrick retained the use of classical pieces to soundtrack A Clockwork Orange – Beethoven‘s Ninth Symphony and Purcell‘s Music For The Funeral of Queen Mary, for example – but had them played by synth pioneer Walter Carlos. The film’s soundtrack was actually an important influence on later synthpop music, not least because it contained the first recorded use of a vocoder.
FACT‘s exhibition, meanwhile, takes the work of late-British author JG Ballard as its main inspiration. And, continuing the synth thread, it’s interesting to note that some of the early British synthpop movement of the late 1970s and early 80s was thematically inspired by Ballard too – most notably through his auto-erotic thriller Crash – just as the sound itself was lifted from the template of German synth pioneers Kraftwerk.
Ballard‘s work hasn’t played out very much in movie adaptation, but it’s interesting to note that Crash is one novel that successfully made it to the big screen, under the stewardship of director David Cronenberg.
The story of Crash focuses on a like-minded group of motor vehicle crash survivors who wish to re-enact car crashes in order to experience “a new sexuality, born from a perverse technology”. Cronenberg‘s film version takes this to psycho-sexual extremes, imagining the collision of two cars as the perfect penetration, the post-traumatic stress of its victims inspiring arousal at the mere site of a chrome bumper.
Whether this is truly science-fiction is up for debate, though what Ballard does is take aspects of modern technology and society and highlight all the weirdness and twisted horror that potentially exists in them.
The term Ballardian is defined by the Collins English Dictionary as: “Resembling or suggestive of… dystopian modernity, bleak man-made landscapes and the psychological effects of technological, social or environmental developments.”
We would say that is probably enough to tick the requisite boxes for science fiction. After all, the UFOs and little green men of the 50s B-Movies were really just reflections of the paranoias of an America getting to grips with the technologically-convenient, post-war country they lived in, in combination with Cold War anxieties and the fear of the communist invader potentially hidden within their own communities.
Science fiction is fuelled by a reaction to an issue of the times it is created for. The story is then projected into a possible future in order to try and make some sense of the present, and warn of the consequences that a present course of action may create.

So, just like the Ballardian themes they refer to, synth-pop tracks like Warm Leatherette by The Normal and Cars by Gary Numan are actually interpretations of the fears of the modern world these artists had seen growing up around them. Nightmares born of untamed jungles of roads and lights, exhaust fumes, and angry engines being revved by human beings whose sense of morality and social order can perhaps be forgotten in the deepest, darkest corners of the city.
It is interesting how such strange and uncomfortable stirrings can be kindled through a few basic synthesisers and a Ballardian mindset.
It may not sound much like outer space, but it certainly sounds like science fiction.
The exhibition Science Fiction: New Death is at FACT until June 22.
Further reading on Getintothis:
The Kronos Begins: The Kazimier, Liverpool
Goldfrapp present Tales Of Us: FACT, Liverpool
Inner Visions: FACT, Liverpool
Getintothis and FACT Liverpool present Inner Visions
The Art of Pop Video at FACT Liverpool
Only Lovers Left Alive: Jim Jarmusch, vampires and a little night music
An Oversimplification of Her Beauty – Terence Nance’s ode to humanity
Oscars, excess and The Wolf of Wall Street
Inside Llewyn Davis and the music of the Coen Brothers
Mark Kermode, Will Self and the nature of modern criticism
Breaking Bad: The Ballads of Heisenberg and the music of Breaking Bad