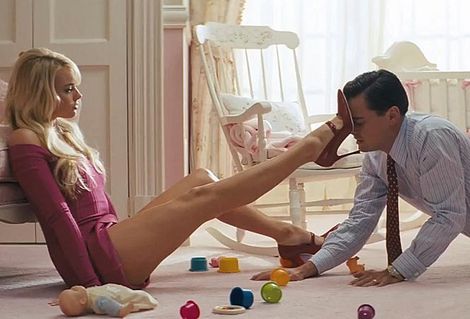 Everything about Martin Scorsese’s current Oscar-nominated film The Wolf of Wall Street screams excess; its bloated 179 minutes running time, through scenes of graphic sex and drug consumption that smear the screen as often as the NASDAQ rises and falls, to a new record high use of the F-word in a movie (569 occurrences, apparently).
Maybe this is just a reflection of how life is on Wall Street, but things have moved on since Michael Douglas’ Gordon Gekko first told us greed is good. For Jordan Belfort, the subject of Scorsese’s latest picture, money is the means, the golden ticket, by which he can live out his wildest fantasies.
If you’re willing to go along for the ride, sitting through the relentless buffeting of a biopic in which you’re shown a world where you can hoover up limitless mounds of cocaine, pop Quaaludes like Smarties, use dwarves as darts, have hookers on tap, and make thousands of dollars a day in the midst of all this, well, it may change you.
After watching the film, it took a few minutes of sucking in the cool night air to remember that my next task was to drive the car safely home and get ready for work the next day, and not actually to drink the nearest bar dry before wrapping my car around a convenient tree.
Leonardo DiCaprio takes the lead as conniving stock trader Belfort, who starts his own brokerage firm in the wake of the 1987 Wall Street Crash and invents a scam to make himself hideously rich.
Basically, it involves buying lots of almost worthless penny stocks, then pushing these same stocks on the public using high pressure telephone sales techniques. Once the value of the stock was high enough, Belfort could sell his shares at a massive profit causing the share price to collapse, leaving all the other investors with worthless portfolios.
This, combined with sales commissions of 50%, soon makes Belfort a multi-millionaire, and his sales techniques are apparently so simple that he is able to gather a motley crew of dodgy telemarketers and small-time pot dealers, give them a script and allow them to sup from the cash wellspring too.
Donnie Azoff (played by Jonah Hill), the first of his recruits, becomes Belfort’s best friend and right hand man throughout his inevitable rise and fall. And from the moment we witness these two smoking crack together behind a diner, their lives and Scorsese’s film spirals into an ever-increasing blur of debauchery and insanity.
Hill as Azoff is excellent buddy material, a clown with insatiable appetites – a yes man in every sense of the word. Australian Margot Robbie (a former Neighbours actress) impresses as Belfort’s platinum blonde trophy wife, and there’s a nice turn from Rob Reiner as Belfort’s dad, Max, brought into the firm as an enforcer to stop everyone spending the entire working day snorting coke and having sex with call girls. The cameos from Matthew McConaughey and Joanna Lumley are great fun too.
Of course, the film hangs on DiCaprio’s central performance, and he sparkles. Ever since his stunning turn as Johnny Depp’s autistic kid brother in What’s Eating Gilbert Grape?, it was obvious that DiCaprio was more than just a pretty face.
As a Scorsese leading man he takes to the role of anti-hero – a role that Marty finds so fascinating – with aplomb. But the difference between Belfort and say, King of Comedy’s Rupert Pupkin, or Goodfellas’ Henry Hill, is that there’s nothing to actually like about Belfort.
Goodfellas is probably the film closest to Wolf of Wall Street in style and subject, but we never feel any sympathy for Belfort and his crew, and we’re never on their side once the feds close in. We just look on voyeuristically at the complete collapse of their morality, where no temptation is resistible.
While the amoral Belfort may not be too nuanced a character, DiCaprio is rather asked to flex his performance muscles in a number of memorable set pieces, including some hilarious physical comedy that ensues when Belfort takes one too many Quaaludes, loses control of his limbs and has to find a way to get into his Lamborghini and home from his country club while avoiding death or arrest.

Standing out amongst these blackly comic interludes are the enthralling motivational speeches Belfort gives whenever he wants to whip up a selling frenzy in his traders. He delivers these testosterone-inducing calls to arms via a mic on a little stage he sets up at the head of his firm’s trading floor. The sight of DiCaprio, eyes aflame, face contorted in a coke-fuelled gurn, taking the adulation of his disciples while the soundtrack blares, is equally amusing and terrifying.
Scorsese has done much to embrace and enhance the use of popular music in film, making pop and rock songs an integral part of his movies, often killing any other sound at points to highlight the cool visuals through the throbbing pulse of his soundtrack.
The Wolf of Wall Street’s soundscape frequently embraces the party era of the late 1980s and early 90s with tracks that might befit a drugged-up yacht party. Tracks like Boom, Boom, Boom by The Outhere Brothers; Baby Got Back by Sir Mix-A-Lot; or Insane In The Brain by Cypress Hill.
These party anthems are then interspersed with dirty, sexy blues from the likes of John Lee Hooker, Elmore James and Howlin’ Wolf. Indeed, it is Wolf’s brimstone voice hollering over the twisted riff of Smokestack Lightning that cuts through most effectively, soundtracking the slow-motion onset of orgy after orgy, helping transform Belfort into some lust-filled Lucifer or brazen Bacchus.
It’s interesting to note that The Band’s Robbie Robertson is listed as executive music producer on this film. Frequent artistic collaborators, in the late 1970s Robertson and Scorsese lived together for a time, and magazine articles of the time alleged they enjoyed the odd night of near Belfortian proportions themselves (strenuously denied by Scorsese). Their reunion on this picture, then, seems more than appropriate.
Apparently DiCaprio fought off competition from Brad Pitt when bidding to land the rights to this movie and, on reading Belfort’s autobiography, DiCaprio was quoted as saying it summed up “everything that is wrong in today’s society.”
I was left with the feeling Scorsese rather lets his protagonist off the hook. Belfort is presented, not just getting away with his criminal lifestyle, but thriving on it. Judge for yourself whether Scorsese delivers a satisfying enough comeuppance for his anti-hero.
In interviews, DiCaprio is of the opinion that these guys do tend to get away with it. The fact that Belfort is alive and well in 2014, and selling the secrets of his sales techniques on the motivational speaker circuit is one thing. That he will be benefitting from the fame and publicity that comes with a Scorsese-directed biopic opens up questions of morality that certainly won’t soon go away if The Wolf of Wall Street picks up any Oscar statuettes.
Yet, judged purely on its merits as a movie, its artistry and performances certainly aren’t undeserving of reward. Whether the Oscar judges choose to give the big prizes to such a grotesque portrayal of American capitalism will be intriguing to find out.
The film is up for five Academy Awards including Best Picture, Best Director, Best Adapted Screenplay, Best Actor for DiCaprio, and Best Supporting Actor for Hill.
And, as an aside, it’s interesting to note that Jonah Hill apparently accepted $60,000 for appearing in the film – the lowest amount he could be paid under union rules – while producer and star DiCaprio took home a cool $10m. In this grand tale of excess, take from that what you will.
In the meantime, watch and be amazed by the spectacle that is The Wolf of Wall Street – just make sure to have a warm bath waiting for when you come out the other side.