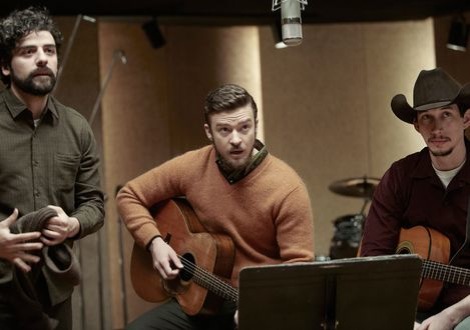 The Coen Brothers’ latest film, Inside Llewyn Davis, heads to cinemas imminently, Getintothis’ Paul Baker discusses the effects and influence that music has retained over their wondrous filmography.

Picture the scene: the curtain is raised by the ascent of a pinsetter depositing 10 fresh pins upon a bowling lane.
We’re positioned inside that hidden darkness of the mechanism, and we look down the narrow lane into this world, a world trapped within a bowling alley. All life is here, and all men.
The music has started already. “La, la, la, la, la, la” comes a familiar voice; and as Dylan croons The Man In Me from 1970’s New Morning LP, we are treated to sumptuous close ups of polished wood, glinting metal, perfect rolling balls and the sight of tumbling skittles.
The beautiful cinematography is almost enough to make us forget the song. Its pleasant Americana sound merges with the Americana on screen, yet the song has been well chosen to open this movie.
Because, as the angelic narrator explains while introducing the film, The Big Lebowski (1998), perhaps the Coen Brothers’ most loved and talked about work, is the story of a man of his time.

Indeed, this song could probably have been used to soundtrack so many of Ethan and Joel Coen’s best work, because if we were to try to distil the essence of these imaginative, original storytellers, it is so often to present the tales and the trials of a man of his time. And their use of music is so often key to the film successfully translating this message to its audience.
Music in film is certainly something these American film-making siblings are keenly associated with.
Fargo (1996), winner of two Academy Awards, arguably made the world sit up and notice the inimitable style and awkward genius of the Coens.
But, ever since the soundtrack to O Brother, Where Art Thou? (2000) went multi-platinum and spawned a resurgence in interest in American folk music, the world also took an interest in how the Coens’ films sounded.
Their latest movie, Inside Llewyn Davis, continues this trend, telling the story of a Greenwich Village troubadour during the burgeoning folk boom of the 1960s.
It is based on the story of real life folkie Dave Van Ronk, and features a soundtrack filled with songs of the time, along with folk standards performed by members of the cast, just like with O Brother…, 13 years previously.
What the Coens had done with O Brother… was bring the music right to the forefront of the film.
It became part of the plot which, among other things, depicted the drive in the 1930s to make recordings of southern American musical forms to sell back to the local black and farming communities who had blended the folk music of their homelands to make something new, something American.
Our hero, Ulysses Everett McGill (played by George Clooney), and his convict sidekicks journey through the Mississippi Delta as the Coens reimagine Homer’s Odyssey as Southern Gothic musical.

The threesome happens upon a number of musical set pieces throughout the film, and ride through them, often thanks to their cover as a close-harmony folk trio. As such we’re treated to various reprises of their ‘theme song’ a cover of the folk standard Man of Constant Sorrow.
The music here was recorded in advance of making the film, and made use of the talents of a wide range of country and folk artists, notably Emmylou Harris, Alison Krauss, Gillian Welch, and The Stanley Brothers.
The subsequent soundtrack album topped the US Billboard Charts and, with its single Man of Constant Sorrow garnering national radio airplay, the Coens had a big hit on their hands.
There was even a concert tour by the artists involved in the soundtrack, which itself became a successful concert film/documentary, Down From The Mountain, directed partly by D A Pennebaker – famous for his Dylan doc Don’t Look Back, plus concert films like Monterey Pop and Ziggy Stardust and the Spiders from Mars. Pretty impressive for a mere movie soundtrack.
When asked about the success of the music in their films, the Coens lay the credit at the doors of two men: T Bone Burnett and Carter Burwell.
T Bone, a talented musician and arranger, was a guitarist with Dylan’s Rolling Thunder Revue. He first worked with the Coens on The Big Lebowski, advising on the popular music that comes so much to the fore in that film, helping to describe the movements and drives of each of the main characters through the tracks that are played while they are onscreen.
He also brought his considerable musical skills and experience to bear on the likes of O Brother, Where Art Thou? and Inside Llewyn Davis.
Carter Burwell is an American composer of film scores who has worked with the Coens to score each of their feature films, with the exception of O Brother….
In a recent interview with BBC 6 Music, the Coens revealed some insights about the sort of direction they give to Burwell when creating the requisite soundscapes for a Coen brothers’ movie.
“There are other movies where we make the whole movie, we cut the movie, without really knowing what it needs from an underscoring or musical point of view, if anything,” reveals Joel.
“And that’s the point we bring in – we always work with the same composer, Carter Burwell – we bring Carter in and the discussion happens then.
“If you look at the number of minutes of music in our movies, compared to most movies, we tend to use underscoring very little. It’s a very short number of minutes of music, for the most part. Most movies are over-scored, I think, so the use of music in our movies is sometimes a little bit more minimal than you might expect.”
Look at the Coens’ take on Cormac McCarthy’s novel of the same name, No Country For Old Men (2007) for an extreme progression of this philosophy.

Here they strip out the score entirely, the menace of the situation allowed to fester in the minds of the viewer, unfettered by the distraction of a soundtrack, that is until the closing titles when Burwell composes a piece of music that somehow ties together all that has gone by so silently before.
This is not to suggest the Coens had developed some problem with the notion of soundtrack or score around this period, merely that their use of music is a delicate process, intricate to each film, and dependent upon the story being told.
Ethan adds: “Also underscoring, obviously, notoriously, is something that works on audiences very subliminally, but also very powerfully. And those are things that are not subliminal for us since we’re making the movie. But that’s a constant for us in all our movies, the score is a huge part of what you feel about what you’re watching.”
Inside Llewyn Davis, released this Friday, looks set to be another film which will showcase the Coens’ expert usage of music to help tell their tale.
We look forward to their latest attempt to soundtrack the story of a man of his time.
Further reading on Getintothis:
Getintothis‘ top 10 films of 2013.
Breaking Bad: Getintothis on the music of Breaking Bad.
Getintothis meets Quentin Tarentino.
The City That Rocked The World: Philharmonic Hall, Liverpool
The Stone Roses: Made Of Stone
Inner Visions: FACT, Liverpool