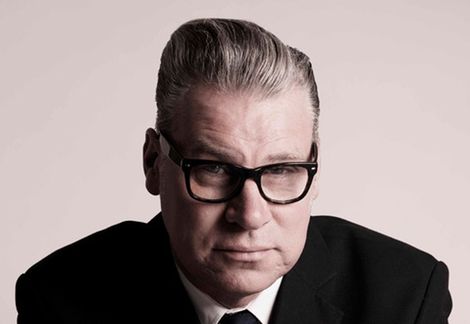 Mark Kermode dazzled FACT with stories of a life spent in a dark room with a notepad, Getintothis’ Joseph Viney took it all in and discusses what role, if any, critics have in the digital age.

In the nicest possible way, it’s very evident that Mark Kermode likes the sound of his own voice.

After all, as a long-standing film critic and culture vulture with a regular radio slot and video blog, the odds are against him being shy and retiring. His public persona is one that exudes confidence. It radiates from his tall stature (granted a few inches extra by that famous quiff), a rapid fire yet commanding speech pattern and ability to segue so neatly into the most bizarre of conversational digressions – thus enabling the would-be demagogue’s most coveted prize: no interruptions!

These ‘Audience With…‘ type occasions are always weighted in favour of the speaker. Barring a disaster, those parked in the newly-upholstered FACT seats were always going to take to Kermode.

In reality though, it’s not that difficult. Touring the nation’s cinemas to promote his new book Hatchet Job, Kermode, in typical fashion, dives right into it and doesn’t really let up until the end.

He runs the gamut from his favourite film (famously The Exorcist; he’s probably seen it more times than you’ve had hot dinners, kid), his bizarre living arrangement to engineer a marriage in Birkenhead and reignites his mini-feud with Danny Dyer, including a rather unflattering impression of everybody’s favourite celluloid spud head.

It’s a fine lesson in how to maintain an audience’s interest in a subject matter that might not hold much third party curiosity (you know, just like…watching films). It’s a fine, if contradictory, combination of modesty, confidence and longevity that sees him through. As we’re aware, Kermode is no fly-by-night rent-a-gob. Indeed, his opinion and talents have been sought by the best and brightest in the cinema sphere.

When the end of his talk gives way to the feeding frenzy of a “pass the mic” Q&A session, we alighted upon the topic of the relevance of art and entertainment critics in the digital age. A very sore spot for some. It’s certainly a warning siren to members of the ‘old guard’, who may harbour fears of being usurped by any old two-bit Charlie with an internet connection and an opinion. That is to say, a decent percentage of the world’s population.

It’s a concept that has stirred up some inevitable thunder on the internet, with any number of the world’s self-appointed literati looking to stick their oar in on subject matter that, in the strictest terms, can no longer be influenced by strong words. As the old adage has it, the horse has well and truly bolted. 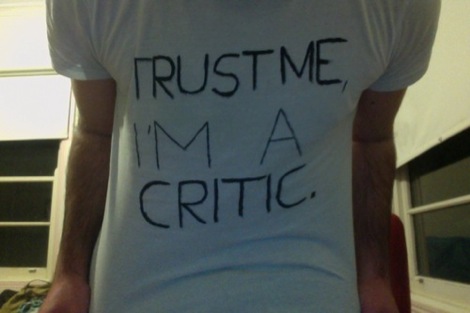 In a review of Hatchet Job, Will Self (a lemon sour in hobnail boots) summed it up in typically curt, swatting-aside fashion. He notes that criticism in relation to any medium has now morphed (or devolved, depending upon your opinion) into a series of conversations, moving away from one declaration espoused by a single entity.

The writer/critic of the present is not simply expected to offer an opinion, dust their hands off and walk away, safe in the knowledge that no recourse can be offered (barring one or two nasty phone calls from a dusty office belonging to some PR company).

Now, it is all about the ubiquitous, precious and ultimately fleeting feedback; RTs, Likes, comments, Diggs (remember that?), shares and hits. Digital writing is being shaped by search engine optimisation (SEO), tagging and in some unruly cases, being distorted entirely and re-shaped as ‘click-bait’; nothing more than some shill binary card trick designed to waste your time and money. Such deceit is nothing new, of course. It’s just been made easier over the past two decades.

But has the threat of a tsunami of digital sludge increased the rate of the death of criticism ‘as we know it’? Are we to be swallowed up in a real-life version of Roald Dahl’s Great Automatic Grammatizator; opinions from the hive-mind slowly changing into one ceaseless, unified certification designed to eke out as much as possible from a limited knowledge base?

Self sees only gloom in the future of what “we” do; “our art forms and criticism of those art forms will soon belong only to the academy and the museum.”

The problem with Self’s assertion, along with similar harbingers of doom, is that while they understand and acknowledge the technology has shifted, they appear too reluctant to concede that the art of criticism (because it *is* an art) can evolve too. Long gone are the days when a critic could have a play shut down, a film re-shot or an album junked with one verbal rubber stamp. Today it’s a much more subtle business, and your critic-in-chief is best poised to do that.

Democratisation of opinion doesn’t necessarily have to mean the mindless expansion of it. Instead, we can utilise the almost limitless resources of the internet to denote not just what is Good or Bad, but who or what is Worth Your Time.

With the aid of your audience and their coveted internet click-based encouragement and positivity (nestled neatly alongside anonymous hatred and antagonism), we can band together and use the assigned critic as a barometer (read: human shield) to determine that which is Worth Your Time. And when it all goes wrong, sacrifice the critic upon a burning pyre of savage forum comments. It’s easy when you’re not in the firing line.

Kermode, being for all intents and purposes part of the old guard, retains a slightly more self-serving view of the whole affair. We can’t blame him for that. It’s his livelihood, the reason people showed up at the FACT to hear him speak and to buy his book. Why would he want a ravenous horde showing up and smashing his keyboard to bits, taking words from his mouth?

Kermode seems to put a lot of trust in the notion that ultimately, the cream rises to the top. He believes that the critic who is being paid, making a living and ultimately has his opinion on art and entertainment dangerously intertwined with his personal and financial well-being will refrain from playing silly games.

That’s more than likely true, but Kermode’s lot are a dying breed. The ‘top’ that the cream rises to now has a much bigger surface area and a lot more people want a piece of the action. But it’s a long, slow process being undertaken. Any real shift or settlement won’t resolve itself for a long while yet.

It should be remembered however, that whether you’re paid or not, whether you have an audience of ten or 10,000, whether your tastes align with current trends, the critic, the dedicated one actively seeking new thrills and horrors, different ways to try and spin the cultural weather vain, is somebody who still demands attention and, at the very least, a chance to explain themselves.

Writer Simon Price summarised it most succinctly: “A world with uncriticised art gets the art it deserves“.