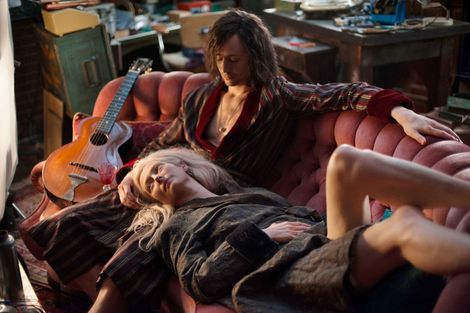 A story of modern day Draculas spending their evenings on road trips through downtown Detroit, looking for Jack White’s house or stopping by rock clubs to stare at the state of modern American music, Getintothis’ Paul Baker sinks his teeth into Jim Jarmusch’s latest offering.

Jim Jarmusch is one of those great names of modern cinema, an American auteur, an individual talent – critically acclaimed, but really without a well known film to go with that name.
That means he’s kept the cool cred, he’s no sell out, yet he’s enticed the likes of Johnny Depp to take the lead in his ‘psychedelic western’ Dead Man (1994) and, Bill Murray – fresh from his Oscar-nominated and Golden Globe-winning turn in Lost in Translation – to star in road movie rom-com Broken Flowers (2005).
Jarmusch has just returned to the big screen with new movie Only Lovers Left Alive, a story about a vampire husband and wife struggling to maintain their lust for life in a cold, isolated, present day, having seen too much and survived too long.
With the popularity of the wholesome Twilight bloodsucking mythos having somewhat faded, is Jarmusch fishing for new fans in the form of late teen/early twenty-somethings, ready for a more sophisticated vampire tale? Possibly, and they’ll probably find much to enjoy in his sumptuous, gothic fantasy.
Only Lovers Left Alive stars Tom Hiddleston – best known for playing the villainous Loki in the recent Thor films and Avengers Assemble – as Adam, a tortured musician, hiding out in darkest Detroit.
He’s weary after a long life where he’s met and influenced the lives of countless musicians, writers and scientists throughout world history and, having seen and done it all, is contemplating suicide via a wooden bullet to the heart. His vampire wife, Eve, played by Tilda Swinton (Burn After Reading, We Need To Talk About Kevin), is hiding out in exotic Tangier. A face time conversation between the two lovers (these vampires do apparently have reflective images) convinces Eve to take a series of night flights to Detroit to be with her eternal love once again.
Speaking in mannered English accents, these vamps spend long dark nights of the soul playing chess, sucking on blood ice pops, discussing great figures they once knew, being endlessly philosophical about their existence, and hating the “zombies” around them – their term for humans – who have apparently destroying everything worthwhile and good in the world.
It all looks beautiful and, being set entirely at night, each scene is perfectly lit with Jarmusch giving a real sense of the magical loneliness and long silences present in those wee small hours when most people are safe in their beds.
Music is an important driver of the story in Only Lovers Left Alive. Adam recounts how, in the past, he gave some of his best work to Schubert, and his desire to again bask in the reflective glow of success begins to endanger his life of quiet solitude.
By recording and releasing some strange new music, Adam finds himself becoming the most reluctant of rock stars. Sixty-one year old Jarmusch is clearly a lover of music and, as such, has frequently cast rock stars in his movies. And while he often produces significant soundtracks, he has also commissioned famous artists to write original scores for his films.
This trend started with his first full feature, Stranger than Paradise (1984), which stars jazz musician John Lurie, and former Sonic Youth drummer-turned-actor Richard Edson. Next movie, Down By Law (1986), starred Tom Waits; Mystery Train (1989) featured Joe Strummer and Screaming Jay Hawkins!
His next three films Night on Earth (1991), Dead Man (1995), and Ghost Dog (1999) featured soundtracks by Tom Waits, Neil Young and Wu-Tang Clan’s RZA, respectively. It’s safe to say, he’s a music fanatic.
The wonderful, goose bump-inducing soundtrack in Only Lovers Left Alive is probably the real star of the film and is largely the work of Jarmusch himself, playing with his band SQÜRL alongside minimalist composer and lute player Jozef van Wissem.

They are essentially given the task of turning the imagined sombre, outré, world-weary outpourings of a soulless, centuries-old vampire into the soundtrack to the film. What they create are louche, experimental instrumentals that somehow combine the feel of a dark, modern, digital piece – such as The Weight of Gold by our own Forest Swords – with a cool, gothy, analogue darkness.
Adam, the supposed composer of this music, is a fascinating character. An embracer of technology, he has rigged up his house with experimental electrics that he gleaned from Nicola Tesla, that great rival of Thomas Edison. Yet he has not embraced the digital revolution, instead soliciting a young human – a music promoter called Ian – to go out and purchase vintage guitars and analogue Telefunken sound equipment, which he uses to make tape recordings of his other-worldly music.
It’s amusing to see Adam baffled by the speed with which the music recorded in his ramshackle house spreads (digitally) across the globe, enticing young music fans to then try and seek out the home of this reclusive genius and put Adam’s future on this Earth in jeopardy.
There really is a lot to like about this film. And for an hour I really was transfixed by the neo-gothic romance of it all. But, this being a vampire film, you are constantly waiting for the neck bite, for the violence and the gore.
Jarmusch is known for his achingly slow narratives, which reveal themselves oh so gradually, with little regard for moving the plot along. I don’t mind this when the story and dialogue is well written, but this script feels extremely clunky. There are all sorts of clichéd jokes about figures from the past such as Byron or Faraday or whoever, and one of the other vampire characters, played by John Hurt, is apparently the playwright Christopher Marlowe who spends most of his on screen time banging on about how he wrote all of Shakespeare’s plays. Not funny
.
And then there are our protagonists… Adam and Eve. Eve, it seems, has committed the original sin of embracing digital technology – proudly brandishing her iPhone whenever product placement is applicable!
While these vampires occasionally bear their teeth, they prefer to get their blood from hospitals where they pay unscrupulous doctors for an O-Negative fix. They then sip their blood, before collapsing in opiate bliss, in scenes somewhat mirroring Trainspotting. Our vampires don’t bite humans anymore because they’re too concerned about bad blood. So, clumsy references to AIDS and the vampire as eternal smack head aside, this means there is little chance of any actual supernatural excitement, nor neck-sucking action.
These modern day Draculas spend their evenings on road trips through downtown Detroit looking for Jack White’s house, or stopping by at rock clubs to stare with boredom at the state of modern American music.
And ultimately, rather than the slow-burning, hot-blooded, lusty vampire picture we might have expected, Jarmusch serves up a rather chilly and somewhat awkward vision of the fang flick. It may suit his glacial style of filmmaking, but I’ll take Christopher Lee over these 21st century bloodsuckers any day.
)
Further reading on Getintothis: