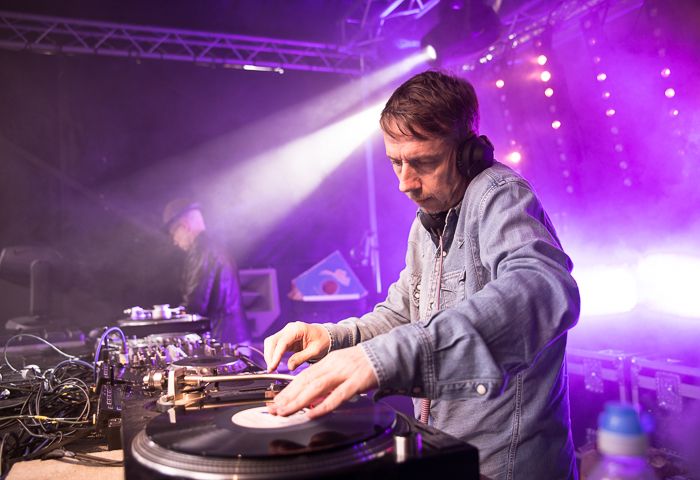 With Freeze’s run of birthday mayhem drawing to a close, Getintothis’ James Zaremba heads down to The Garage for Gilles Peterson’s Worldwide Project.

Usually considered to be at the techno epicentre of Liverpool’s club scene, The Garage opened its doors last Friday to a wholly different culture of sound. Defining musical movements for well over a decade now, Gilles Peterson‘s Worldwide project has always manifested itself lovingly within his DJ sets.

Proving to be no exception in his first Liverpool show since a summer appearance at Bombed Out Church, Peterson traversed between the heavy sounds of Jamie XX‘s – In Colour and the tropical sounds of his own Sonziera – Brazil Bam Bam Bam production in a well-rounded set of musical exploration.

Whilst a heavily stacked Funktion 1 sound system may not provide room for the archetypal eclecticism of a Gilles Peterson DJ set the unending depth of his record bag swept this circumstance aside with a thirty-minute adventure into the heavier end of his collection.

Ambient and sweeping electronic sounds filled the room before being brushed up by the rhythms and upbeat melodies that have come to define the Worldwide sound of Peterson‘s Brownswood Recordings.

With a large section of his performance dedicated to the music of Latin America, The Garage likely gained its first exposure to the sounds of Roberto Roena and Frankie Vazquez. It takes a DJ of great experience to have the dance floor all (poorly) attempting to salsa, whilst just an hour ago they were two stepping to the deeper sounds of electronic music.

Without the whole experience feeling too contrived Peterson masterfully provided a soundtrack to the evening that educated as well as entertained. Even through the provision of these rare and unheard sounds Peterson was able to capture the floor whilst pumping out northern soul classics such as Bileo‘s – You Can Win and garage anthems such as Zed Bias‘ – Neighbourhood.

The ever conscious blend of rare and classic, new and old, heavy and melodic provided the night with a vibe that the whole audience could enjoy. With his legendary residency at clubs such as Dingwalls drawing in an older crowd and his links to artists like Four Tet drawing in the younger, Peterson has a serious job on his hands when it comes to delivering a set that suits his crowds.

On this occasion, as with most, it was an accomplished set, however a fairly abrupt ending dampened the occasion to a degree. With a brief announcement on the microphone Peterson was gone and with it the crowd soon filtered out. However, the occasion – with it being the final party of Freeze‘s 10th birthday celebrations, was nothing short of exceptional.

The melting pot of student and local and younger and older always provides a socially enjoyable dynamic that is scarcely found at other such shows in Liverpool. It is for that reason, sometimes above their string of exceptional bookings that Freeze continues to define what club culture should really be about.