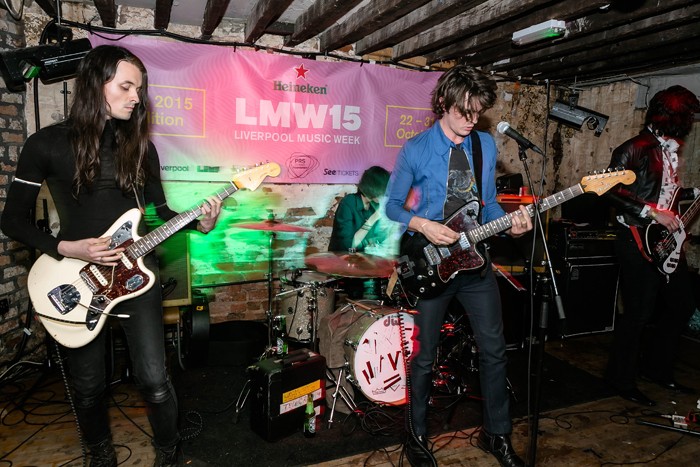 As Telegram finally look to deliver on their early promise with the release of their debut album, Getintothis’ Lowri Gronow gives it an early once over.

Telegram release their hotly-anticipated debut album Operator early next year and bring it to Preston as part of a UK tour.

Released on the band’s own GramGram label, the album features twelve tracks including the forthcoming single Taffy Come Home and a reworked version of the band’s well received debut release Follow.

Serving up tracks that embrace the weird and the wonderful, Telegram take a step in to the adventurous side of indie-pop. Repetitive, psychedelic, pulsing guitar and buzzing feedback create a blizzard of sound with some catchy standout tunes. Embracing his prominent welsh accent, Matt Saunders offers an extra layer of intrigue to the band’s sound.

There is a style captured through both their sound and image that mirrors that of Primal Scream’s Bobby Gillespie, a throwback to the 80s indie scene at its very best. A shared love of Roxy Music and Krautrock combine to produce a sound that doesn’t pander to the safe music that is the offspring of Britpop and Telegram promise a genuine escape route for those bored of bands that appear to toe the mainstream line.

Having already built up a decent fanbase and quickly won over the music press, eventually including Getintothis who saw the light at their much more solid showing at Liverpool Music Week appearance, Operator looks set to see them finally deliver on their early promise.

Telegram are supporting the release of the album on the February 5 with a limited tour that sees them visit the Soup Kitchen, Manchester 13 and Preston’s Blitz on 15.