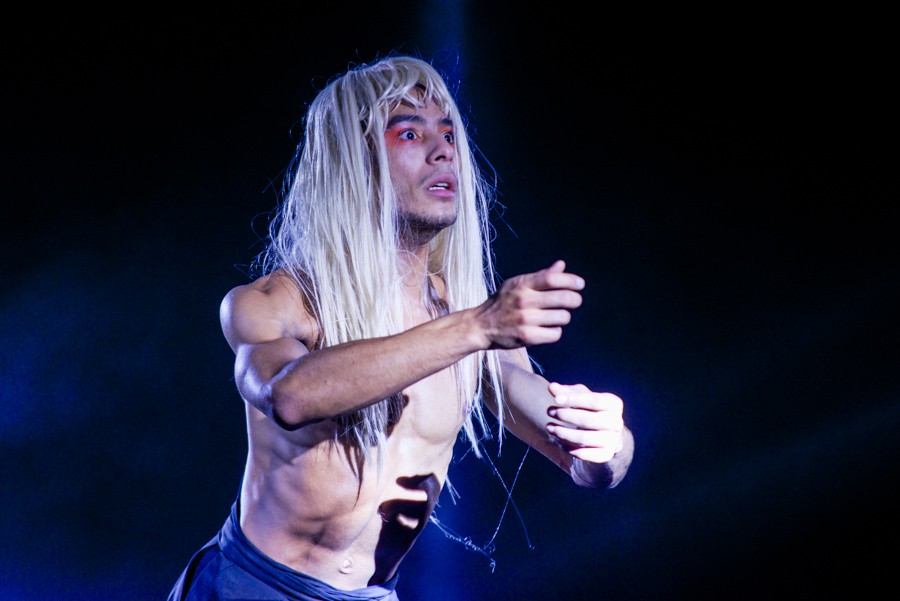 A circle in the centre of the cavernous, multi-levelled amphitheatre of the Black-E is lit, undercut by a darkened floor, spotlights tracing around in a limited colour palette of crushed, drowned pastel purples and otherworldly aqua blues. It outlined an amorphous mass of broken, barely human-looking limbs, heaped in the centre of the stage. Smoke gathered and rose like breath on a cold night, a light from above weak and patterned like moonlight breaking through a forest canopy, further reinforced by an organic buzzing and rainfall soundtrack.

Central to Shrine was a male performer cutting an ancient, Polynesian idolistic figure, naked from the waist up in flowing, robe-like culottes. With make-up applied to his face and sides, making his sinewy musculature stand out even more, he wore a wig of long blonde hair, lending the dancer an androgynous, almost inter-sexual appearance. The tribal figure appeared asexual and animal-like, primitive and devoid of gender.

The performer began to move, almost imperceptibly at first, accompanied by a droning bass texture and a booming, moaning, rasping semi-beat that morphed into half-formed words. The dancer stirred gradually, tense and sinewed, movements seldom aligning to the beat of the music, at first jerky and spasmodic. Passages of movement played out loosely with phases of the soundtrack, evolving and building along with the music. There was an impressive physicality to the performance throughout, a Tai-Chi-esque martial artistry that appeared rehearsed and trained, yet informal and primal.

Sometimes his movements were trance-like, shamanistic, sometimes abrupt and confrontational as he approached the circular stage border. They shifted from smooth and flowing to frantic and flailing; sometimes the performer looked desperate, clawing like a dying animal as the circle around him pulsed with colour in imitation of breathing. There were peaks and troughs, the dips causing a sudden heightened awareness in the viewer of their own breathing pattern. Sometimes the spotlights formed corners at four points of the circle and stood like vast columns; at times these columns wavered and teetered organically.

Are we ready for the GIT Award? Find out more about the 2016 launch, judges and how you can enter!

As the performance progressed, the dancer began to twitch and move more in time with the swirling soundtrack, seeming more human and less animalistic as layers of sound built. The highlight came late on, as the performance exploded into a crescendo of flurried movement and the lighting followed, the roving spots sometimes flashing in the viewers’ eye to create a temporary blinding effect. The dancer roved all about the space, accompanied by the spotlights’ strobing making him appear as if he was de-materialising and re-appearing over and over. Almost as if he were glitching; very modern.

The music followed Forest Swords’ template without being too familiar, particularly in its sparser aspects. The opening showed a musique concrète influence, and many of the sampled beats used were comprised of breathy snuffles and guttural exhalations; uncomfortable to listen to, almost pained-sounding at times. At other times the music was rumbling, striding and confident, later on picking up fragmented vocal samples to form ritualistic chants and evocative shrill whistles as micro-melodies. Forest Swords himself was elevated on a balcony above the audience and lit almost as an afterthought, a mostly-obscured, peripheral part of the performance. The focus was almost solely on the performer at the centre.

In terms of interpretation of its meaning, Shrine certainly lived up to its intention of exploring and reclaiming the act of breathing as a powerful, purposeful tool. As some of the more conventional dance moves seemed almost feminine, but the physicality more masculine, the piece also questioned the construction of gender around our bodies. The use of a perhaps implacable, unenterable ‘keep away’ circle for the performance commented on the nature of society, and its construction of real or imagined boundaries which we all accept and maintain.

The staging wasn’t without its issues; the Black-E felt sparsely populated, the ‘sold out’ audience falling short of the three-figure mark. A greater gathering might have lent the performance more of a spectacle, particularly the conclusion in which dancer Owen Ridley-Demonick paced slowly out into the audience. A larger crowd might have parted around him impressively in hushed reverence; as it was, a couple of people shifted awkwardly backwards a pace or two.

Nevertheless, it was a brave and competently directed piece by Forest Swords, with a strident visual style. Future performances, with a couple of tweaks, would be a welcome addition to any cultural calendar. 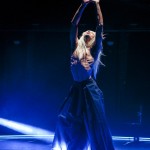 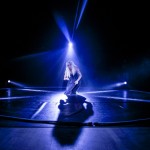 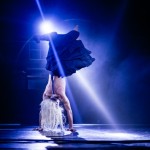 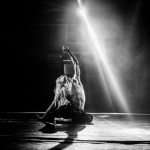 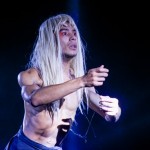 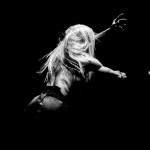 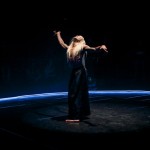 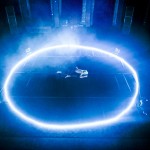 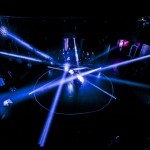 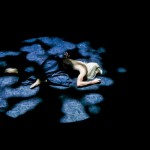