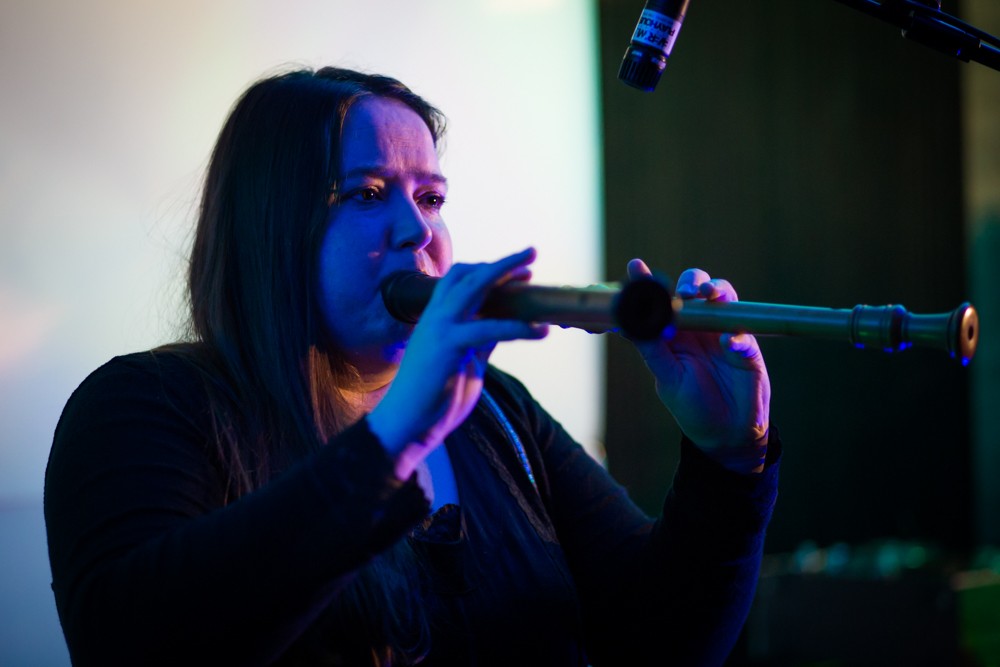 Laura Cannell at the Everyman Bistro

On a Thursday night at the tail-end of January, Getintothis’ Rick Leach was transported from the Everyman Bistro across centuries and thousands of miles by the timeless music of Laura Cannell.

“This evening’s performance of Rapunzel will start in two minutes. Please take your seats.”

This was a bit unusual. Not what you’d expect to hear at the very start of a support slot by Liverpool’s In Atoms, barely a few notes into the set. Maybe this was going to be a real genre-bending performance, but no, it was simply sound bleeding upstairs from the panto at the Everyman.

Luckily, this was the only occasion during the set when we heard any such interruptions. There were no other “look out, they’re behind you!” moments and no-one ran around chucking sweets into the 100 or so who’d gathered at the Everyman Bistro. Instead we were treated to what was possibly the quietest set ever.

45 minutes of gently undulating music, subliminal and almost silent drones being manipulated from a laptop by the solo In Atoms, intensely concentrated music, tape loops and random sounds heavily focussed with a slight smattering of tiny notes plinking over the top of it all.

It was so quiet though and akin to watching a performance in a very old cathedral. A few minutes in someone arrived late, clomping down the stairs and chatting rather loudly. It would have not been surprising if someone had told then to shush. Everyone turned around. Glares were given out and an apologetic shrug was made. A bit of an oops.

Never mind. We all stood still, barely daring to sip our drinks or to make any sound that would shatter the moment. It was a mesmerising; hints of Reichian minimalism threatening to break through every so often, but fading away into Aphex Twin-like noodlings with the rough edges sanded down.

Along with the tape loops, a constant projection of very washed-out, over-exposed film clips were projected at the back of the stage, twisting and twirling. None of the individual clips lasted more than twenty seconds or so and were repeated over and over again. Combined with the music, the whole effect was very hypnotic and quite woozy. It was hard to tell, but some of the audience were either dropping off or had closed their eyes to concentrate on the music. Yet In Atoms provided the perfect sounds for a Thursday night at the tail-end of a miserable January.

After a very short break, we were treated to the immensely talented and innovative Laura Cannell who’d come all the way up from Norfolk to blow our January blues away.

With a critically acclaimed 2015 second album Beneath Swooping Talons under her belt as well as a remixed/deconstructed version of the same album by such experimental artists as Replekz, Hoofus, Charles Hayward and more, it was clear that this wasn’t going to be just a normal folk gig. Laura Cannell may fall into a folk category (just, at a stretch), but to have such vision to almost completely rip up an album by handing it over to be taken apart demonstrates a mind-set that’s open to much more. This wasn’t going to be some dyed-in-the-wool, precious hey-nonnny-no, fingers-in-the-ear show and so it proved.

The stage wasn’t loaded with stacks of gear; there were no laptops or blinking lights. Just a single mic stand and a table on which there were a couple of recorders and a violin. Sometimes you just need the bare essentials. You can still make exciting music.

She wandered quietly on stage, picked up a violin and let fly with sounds that seemed impossible to come from such a small instrument. It was urgent, fierce, frantic and sounded as if she was playing at least three violins at the same time. This was supposed to be medieval and ancient music. Music from another time and yet it seemed to speak of the future as well as a dark and distant past.

At the end of the first song, All the Land Ablaze, from the Beneath Swooping Talons album, she shyly and quietly apologised for playing such miserable music. It didn’t seem at all miserable. There was nothing Sisters of Mercy about that song. There was a depth to it that was beyond misery.

She kept the violin for the next track, For Sorrow Salt Tears, but unwrapped the bow strings and sawed away at it with the top of the bow under the violin, playing all four strings at once and wrought such tight and precise noises that you knew were not made by accident, but by design. This was musicianship of the highest order and not just thrashing improv. In a strange sense it recalled Swans at their most focussed and intense.

Remember music lessons in primary school? Recorders? Everyone had recorders. But not everyone played two recorders at the same time unless you were messing about. Laura Cannell wasn’t messing around when she switched from the violin to playing two recorders simultaneously and making fragments of a 5th century psalm of repentance sound as if it had been written only the day before. The whole audience were wrapped up in it, transported to another world as we could hear each of her inward breaths between the notes.

She might be from Norfolk yet the music seemed pan-European and echoed with tales and feelings from the very edges of the continent.

She introduced each song, explaining where it had came from, the origins-songs written by Henry VIII, songs about mysterious killer dogs in the salt marshes of Norfolk, songs composed by Hildegard of Bingen in the 11th century- but all of that didn’t and couldn’t explain how life-affirming and modern it seemed. This was not dry and dusty academic music from the past by any stretch of the imagination.

Her set ended after an hour; she debuted a brand-new song, You Then Departed, possibly one of the saddest songs ever written and yet it was brilliant. How it’s possible to convey such emotions without words, with just music alone, it’s hard to say, but she did it magnificently.

Laura Cannell seems to be one of those purposeful and determined, shy and diffident artists who lets the music do the talking. This was a gig like no other; so unrock and roll that the very idea of guitars and drum kits seemed a million miles away. And yet…that is a good thing.

Get rid of all the tired old clichés and lose yourself in something different. Listen to music. Really listen to the music. Listen to Laura Cannell and realise that that is what it’s all about. 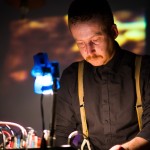 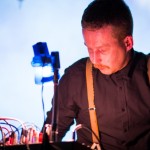 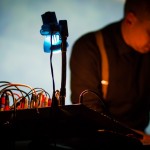 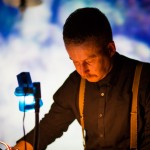 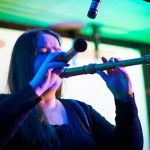 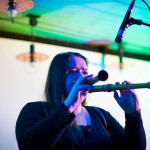 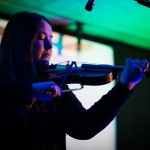 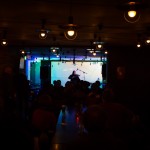