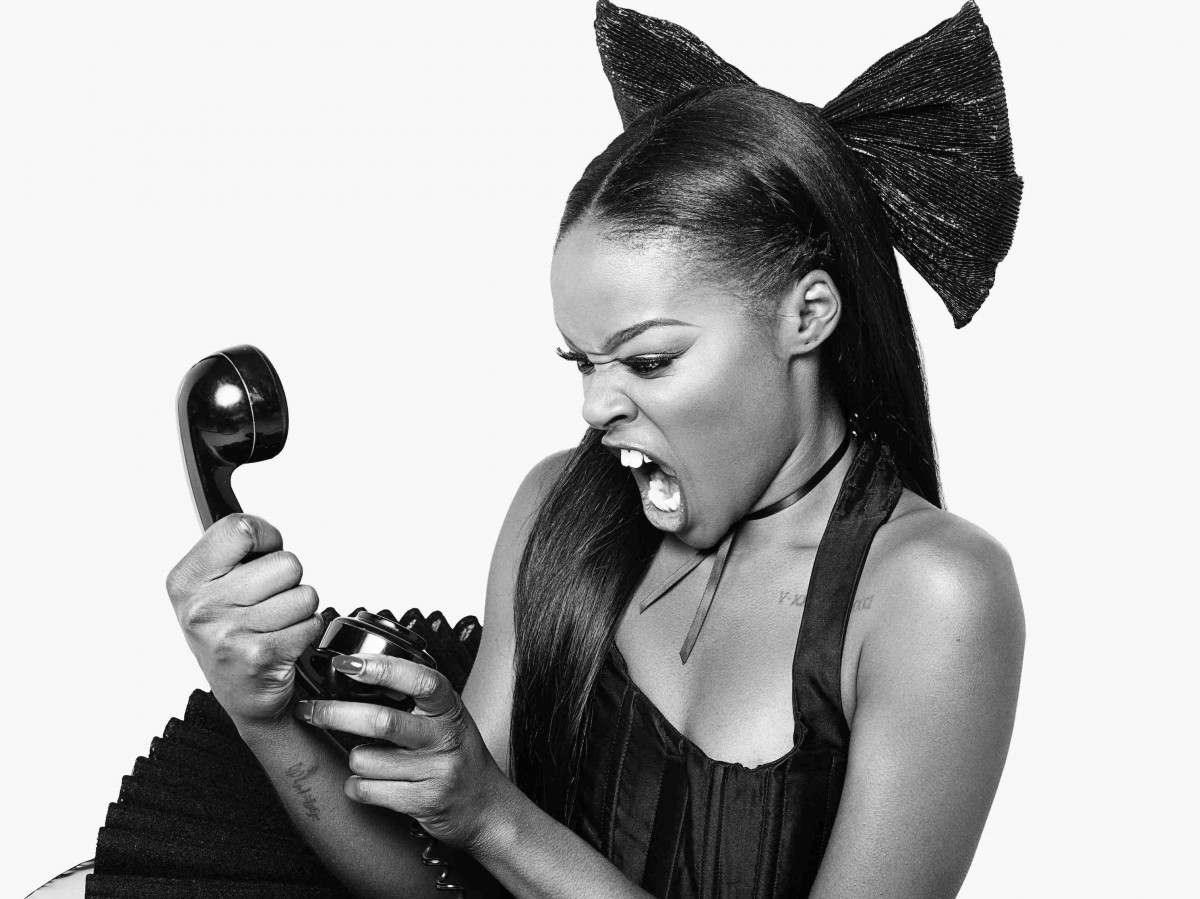 Like the rest of the world, Getintothis’ Shaun Ponsonby watched Azealia Banks’ attack on Zayn Malik in horror, so the sanctimonius cretin decided to comment on it.

It’s sad to say, but artists making public spectacles of themselves can be undeniably entertaining. That is the callous side of us as a people. “Haha! They’re probably having a full-on mental breakdown! LOL.” Deep down inside, we know it’s wrong. But who can honestly say they didn’t get a kick out of Britney Spears’ head shaving or Charlie Sheen’s initial post-Two and a Half Men performances in TV interviews? “I am on a drug. It’s called Charlie Sheen. Winning!” etc. There is a part of us that likes it. Admittedly, it is a part that we hate, but part of us nevertheless.

And then there is Azealia Banks.

Despite my human gawping, when it boils down to it, I do feel for the anguish that someone like Britney Spears must have been experiencing to act out in the way she appeared to be (though I am also acutely aware of the possibility that press reports could have made it seem worse than it actually was). But Banks just seems like an all-round awful human being.

I have mentioned her shenanigans in the past annals of Cosmic Slop, and always with a sense of bafflement. She has the same level of irrationality as someone like Spears did at her lowest ebb, but, with some disgustingly outdated views thrown into the mix and, significantly, alarming consistency for it.

You will obviously be aware of this, because it has been trending on all forms of social media for a gazillion years, but for the benefit of the presumed hardcore Getintothis reader who has been living under a rock; it all came to a head over the last week when she lost her shit at Zayn Malik.  She initially posted a light hearted comment on the similarities between Zayn’s new video (the title of which I couldn’t be bothered to research) to a few of her videos and looks. 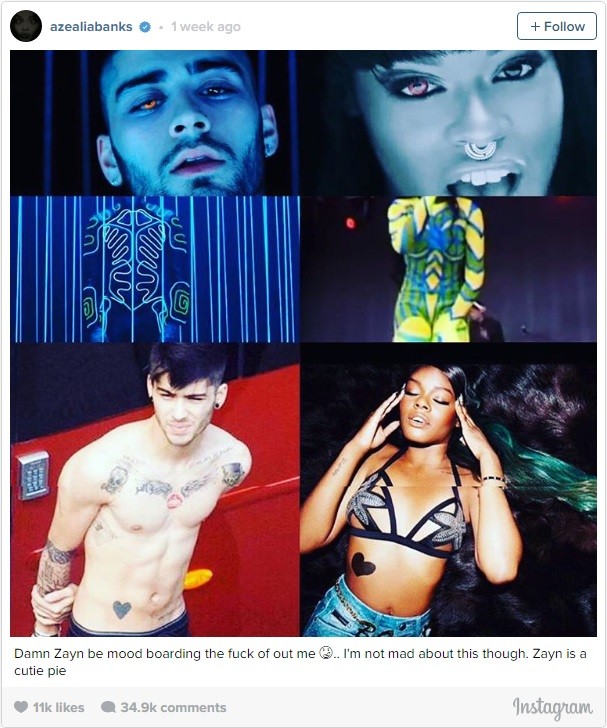 Personally, I don’t see that as accusing him of outright plagiarism. It seems like more of a jokey comment. Because the former Direction, the importance of whom has been wildly hyped and overstated, obviously couldn’t be ripping off Azealia as they were both ripping off cult 1982 Disney sci-fi movie Tron.

…and this slightly less easy to decipher one…

His @ is too good? I am utterly clueless as to what that means. His twitter handle?

For whatever reason – either because she is a narcissistic gimp or extremely sensitive about her @ – Banks assumed this was aimed at her, and went on a vile, racist and homophobic tirade against Malik, not an hour or two after referring to him as a “cutie pie”.

As her twitter account has since been suspended, I’m relying on screenshots here, so here’s a series of highlights (lowlights?) 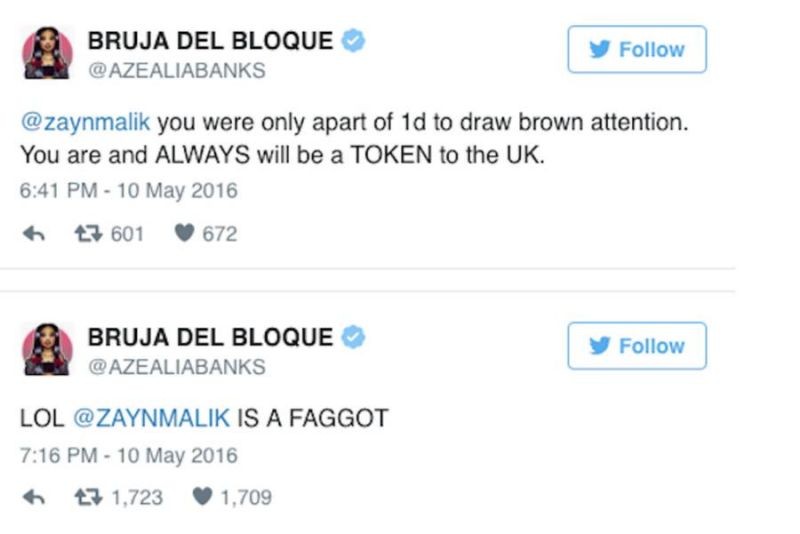 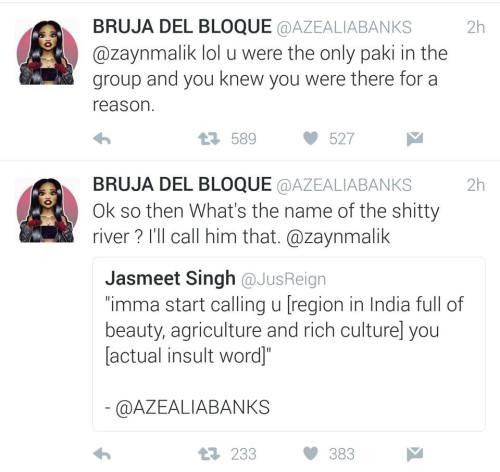 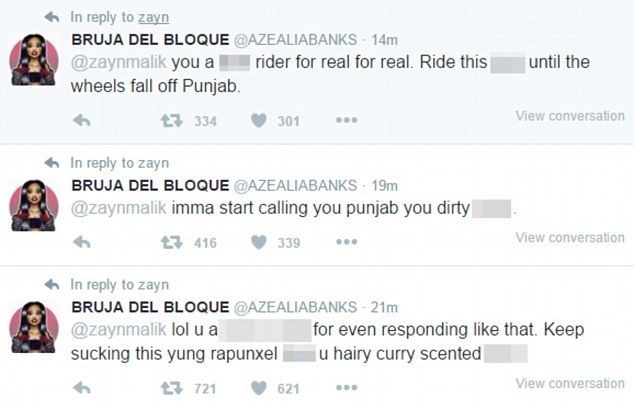 Charming. I think you forgot to threaten him, there. Honestly! You call yourself a racist…

Malik, to his credit (and it pains me to say that) didn’t respond too much to this bizarre series of outbursts, other than one quick clarification in which he seemed to find the whole thing confusing. 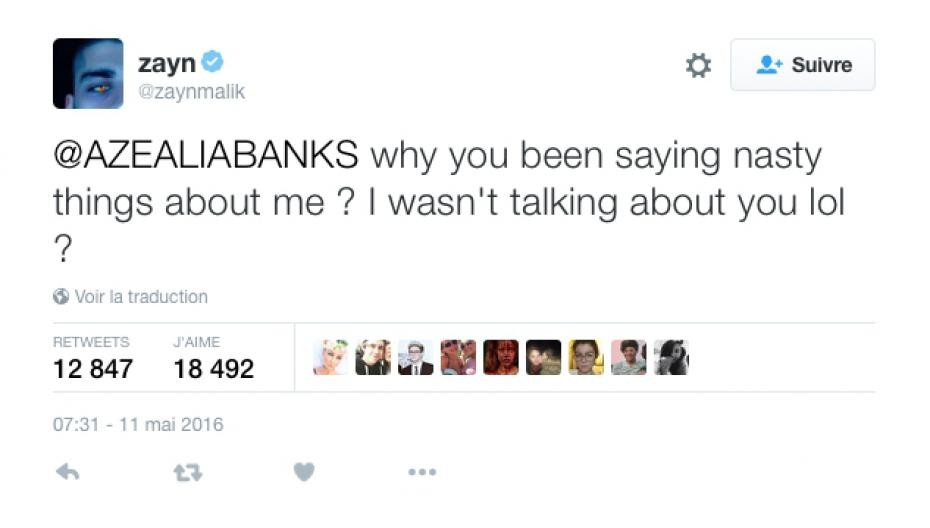 Which led to but more abuse… 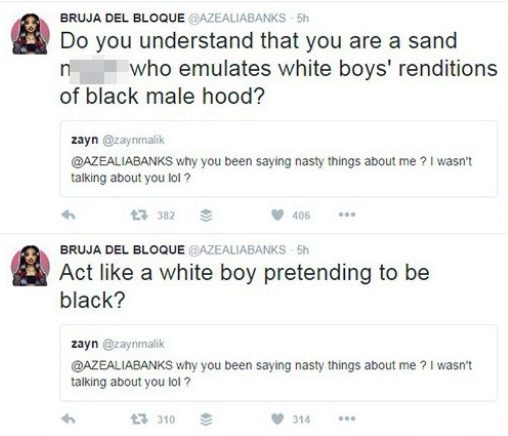 She also at one point gloated that the US military would kill off Malik‘s family. #LOL, right?

Because members of One Direction, either former or hiatused, can’t blow their nose without twitter erupting, a few of Zayn’s young fans fought his corner for him, which led to Banks continuing her unbroken record of sheer class by berating a 14 year old girl who apparently works for Disney with insults. 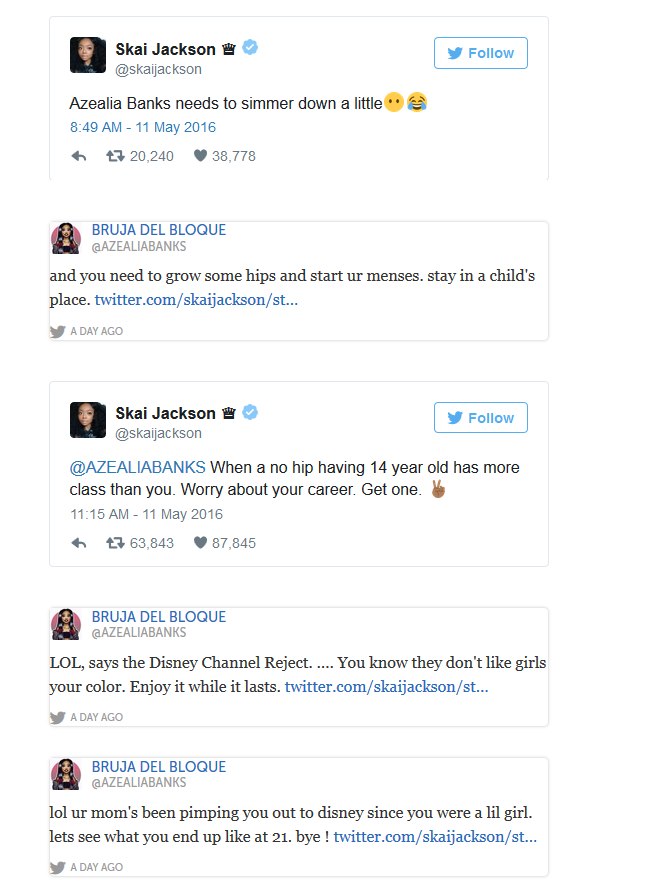 At that point, it seemed enough was enough for people. Not only was her twitter account suspended, she was dropped from the bill at London’s Rinse Born and Bred Festival (after which she bragged that she was the only reason people were going, a bold claim for someone whose album only reached #62), and was reportedly investigated by the Home Office. Hilariously, part of her initial response seemed to suggest that this was some kind of conspiracy as she insults minorities all the time, which is about as effective a defence as being caught mid-boink with someone other than your husband/wife and claiming that you should be excused because you have had loads of affairs.

She eventually posted a slightly more considered – though, true to style, still rambling – statement on Instagram, coincidentally after it became clear that she was losing gigs. It is about 30 yards long, so I won’t post it all (I would urge you to search for it for full context), but she did include some thoughtful and undoubtedly true statements about the nature of institutionalised racism within the music industry. I don’t doubt for one second that she has sadly experienced racism and sexism within the music industry first hand, and it is utterly abhorrent that this has happened to her, or indeed anybody.

Not for the first time, her justification appears to be along the lines of two wrongs make a right; “Calling him [Malik] racial slurs was my way of trying to angrily remind him that he is in fact not one of them, he is one of US.”

Cosmic Slop isn’t always this heavy, click here to read about Beyonce’s Lemonade, why the world isn’t flat and why Justin Bieber can just about fuck off.

Why, yes, I believe it could.

And while I agree that it is unjust hypocrisy – and is something that should be acted upon – that she gets banned from twitter, but Donald Trump (who she supports for President, incidentally) and groups like Britain First are allowed to post their bollocks continually, that is not an excuse to racially bully another minority. At the end of the day, her go-to phrases when she was angry were “Paki”, “Punjab” and “faggot”. Is that not a problem?

If you were angry with someone, would your go-to phrase be a racist/homophobic/xenophobic slur?

The length of time this whole saga went on was so ridiculous that I opted not to cover it last week as it still appeared to be unfolding. This was mainly because she kept piping up like a petulant child not getting her own way, whingeing in the classroom because everyone was against her.

Banks did eventually apologise – possibly once she realised how severely she was sabotaging her own career; “I want to extend my sincerest apologies to the world. Employing racist/sexual slurs/stereotypes in attempts to make fun of or degrade another person or group is absolutely unacceptable and is not fair or fun for anyone. Allowing my anger to get the best of me, I’ve managed to insult millions of people without reason. And for that I give my deepest apologies“.

So, I dunno…maybe Azealia Banks just needs to stop talking. Like, now. Just put the spade down and move away from the hole, and discover where this bile comes from within her.

Father John Misty‘s interview with Radcliffe and Maconie on 6 Music last week was up there with Parkinson V Ryan and Holmes V Blaine.

Drake has toppled Justin Bieber as the most streamed artist on Sporify. There are no winners here.

The reason Oasis‘ new Supersonic documentary ends with their Knebworth shows is because only about 3 people care what happened afterwards.