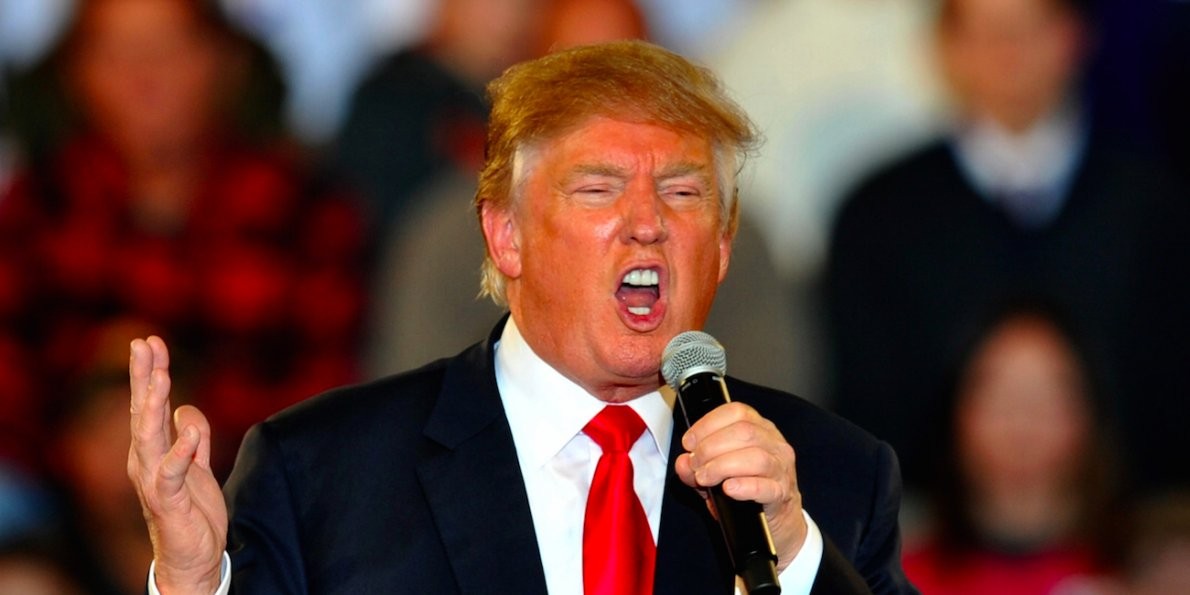 As America’s film and music stars come out either way on Trump, Getintothis’ Shaun Ponsonby notices that the cooler the personality, the less likely they are to support the sleazy lunatic.

I have heard the name so often recently that it has lost all meaning.

In the past when I saw him, I would think of someone breaking wind – a  trump, if you will – then giggle uncontrollably about a man with silly hair marrying a woman named Ivana Zelníčková , making her Ivana Trump and failing to see the hilarity. That was really the first clue that this was a man with no self-awareness. Like Noel Gallagher, but rather than mild plagiarism he is now frighteningly a potential to become President of the United States.

I say “a potential”, I don’t believe this gassy lunatic will actually become President. Outside of his own supporters, he (and his supporters, come to think of it) just seems to repulse everybody. Last time around, they found Mitt Romney was too far right to chime with a modern day, multi-cultural America, so the US right wingers apparently said “I know how we’ll get a conservative in the White House again! Let’s go even further right”. Fool proof. Alas, I can’t see Trump gaining much support with people outside of his own, rabid fan base. He’s a bit like One Direction in that sense.

That’s not to say that Trump’s supporters are just conservatives. He seems to be chiming with people who are sick of the political system, or ardent viewers of the Celebrity Apprentice, or people who don’t know what words mean. He is truly representing a cross-section of America’s biggest cunts.

And if you think that’s harsh, look no further than his celebrity endorsements. There’s Hulk Hogan, the beloved wrestling star who was caught on tape racially abusing an African American man whose whoopee stick his daughter had vulcanised. There’s legendary boxer, ear biter and convicted rapist Mike Tyson. Willie Robertson from Duck Dynasty, a show about professional hunters which was put on hiatus due to some outrageously homophobic commentary from his father Phil. Ted Nugent is endorsing Trump, of course. He’s an awful scab who will shoot his mouth off no matter what, totally failing to realise that he hasn’t been relevant in any way since 1977. That’s before we get around to the literal Klan members who have endorsed him.

In fact, with a list like that, part of me is more interested to see who will come out to support Trump next than who will be President. Are Charles Manson and David “Son of Sam” Berkowitz going to hold a joint-press conference from a prison cell and endorse him whilst liberally waving around an urn with Ted Bundy’s ashes inside and Trump’s face plastered on the lid? At this point, it seems inevitable.

My favourite of the Trumpeters, though, is Aaron Carter. Remember him? Probably not. I know I didn’t. His brother was in the Backstreet Kids in the Sync or something. He had a couple of minor hits about 20 years ago when he was about 7. He’s like the musical equivalent of a fax machine; not really all that relevant to kids in the 90s, and now nobody has any use for him.

These people all seem to be of a certain type of celeb-u-tard. None of them are what you could consider “cool”. No-one people give a shit about. I’m thinking we could even rate them on a Trumpometer. It would be like the tiresome “What’s Hot/What’s Not” editions of lazy magazines, mixed with an episode of BBC One’s Pointless. The less points you have on the Trumpometer, the cooler you are.

Aaron Carter might be voting Trump, but Chuck D apparently led the crowd in a “Fuck Trump” chant at SXSW. Who looks more appealing, the intellectual rapper who educated an entire generation or Nick Carter’s even less talented brother? There is a correlation there, and Chuck D has a perfect zero score, compared to Carter’s worrying 89. Janelle Monae is currently leading anti-Trump protests and made two of the most bonkersly brilliant albums of the decade, so she scores another perfect zero, whilst Hulk Hogan threatens to become his running mate (no, seriously) and scores a douche-tastic 98 when the racism is taken into account (with a possible 2% margin of error).

It’s impossible to imagine the Hollywood elite or musical greats rallying around Trump, lest they alienate their largely rational audience who think that getting Mexico to pay for a wall on their border is actually dumber and more naïve than any scene in the entire history of Chucklevision.

The biggest signifier that people who matter don’t like Trump is the story that emerged last week about his dealings with the Rolling Stones. Regarding a show on the band’s Steel Wheels tour, the band’s live producer Michael Cohl said; “Unfortunately, the only person I could get to kind of agree to the site fee we needed and to work it through was Donald Trump…[and the Stones said]’This is all great, but we’re not going to be affiliated with Donald Trump. At all. Screw you.’ And I go, ‘I will control Donald Trump! Don’t you worry!’”

They negotiated the deal on the basis that Trump would not make an appearance at the gig. But he ignored that clause in the legally binding contract and showed up to do a press conference anyway. After several failed attempts to get rid of him, Keith Richards “pulls out his knife and slams it on the table and says, ‘What the hell do I have you for? Do I have to go over there and fire him myself? One of us is leaving the building – either him, or us.’” I said, “No. I’ll go do it. Don’t you worry.’”

According to Cohl, Trump left the building after 40 of the band’s crew showed up with “tire irons and hockey sticks and screwdrivers”.

So, if like me you’re watching in horror at the rise of Trumpageddon, be sure to put that picture in your head of a knife-wielding Keith Richards chasing him out of the building. Another perfect zero on the Trumpometer.

There is a rumour floating around that Axl Rose is to replace Brian Johnson on the remainder of AC/DC‘s tour. I can see why, but there are two fatal flaws; a) Guns N Roses are preparing their massive world tour, and b) AC/DC are known to be consummate professionals and are unlikely to put up with Axl‘s bullshit.

Madonna has overtaken Bruce Springsteen to become the highest grossing solo act of all time. Is that why Springsteen‘s ticket prices were so extortionate?

Zayn Malik attempting to describe The Beatles’ influence on his work his hilarious. Even the headline for the NME interview is unintentionally brilliant. Check it out, you won’t be disappointed.