“Mother Earth is pregnant for the third time, for ya’ll have knocked her up
I have tasted the maggots in the mind of the universe
I was not offended, for I knew I had to rise above it all
Or drown in my own shit”

This summer, George Clinton and Parliament-Funkadelic come to Liverpool for the first time since 1971. This will be a full-on Parliafuckadelicment thang. P. Funk, uncut funk, The Bomb, and, deeper still, the Mothership Connection, and a must-see opportunity to see the genius behind it all: George Clinton, the one man who links doo-wop to hip-hop and everything in between.

On that first visit, the P. Funk collective were still touring purely under the Funkadelic banner, the Parliament name being tied up in legalities. They were over here to support their latest record – a truly astonishing display of funk, soul, psychedelia and rock & roll called Maggot Brain. If you were to invent a word to describe the sound of this album, you would probably stumble across the word Funkadelic.

The P. Funk dynasty literally began in a barber shop in New Jersey, where Clinton and his comrades formed a doo-wop group called The Parliaments after a brand of cigarettes. As time wore on, they tried to be a clean-cut vocal group, a la The Four Tops, and Clinton even for a time served as a Motown staff songwriter (most notably, after he had left the stable, the Jackson 5 recorded one of his earlier songs and first Funkadelic single, I’ll Bet You, on their third album).

However, the group were too funky to pull off the required slickness, and after a notoriously abysmal appearance at the famed Apollo Theatre in Harlem – which they were afforded due to a hit single, later Northern Soul classic I Wanna Testify – they decided to go in a different direction. Around this time, they also lost the rights to the name The Parliaments, so Clinton opted to push the backing band forward and christen them Funkadelic.

Does Liverpool have enough funk in the rump to lead a cosmic renaissance?

When most people think of Parliament-Funkadelic, the late 70s Mothership Connection era is likely the first thing that comes to their head. But, in truth, the early Funkadelic records were freaky.

No, even freakier than that.

Psychedelia had been explored in R&B already, most notably with the sheer genius of Sly & The Family Stone, but even the sheen that covered Motown was starting to get a little high. They were getting in on the act with producer Norman Whitfield taking over The Temptations, becoming one of the few acts on the label to explore an expansion of sounds and dealing with the realities of urban life. 1968’s Cloud Nine was probably the earliest example of this and won the label their first Grammy. But Funkadelic took it to a level that no-one had dared take it, and will probably never dare take it again.

It is perhaps telling that the newly christened band settled in the motor city itself – Detroit and signed to the small label Westbound Records (also home to the early Ohio Players records). Here, with their new funky, psychedelic, hard rock sound they fit in perfectly with bands like The Stooges, MC5 and Alice Cooper just as Motown was moving to LA. In Don Letts’ documentary Tales of Dr Funkenstein, Outkast’s Andre 3000 states; “When you sit there and think of these black people, this black band, really doing rock music. And that’s kinda rare now, but black people used to really like rock music.”

It is probably uncontroversial to say that, as ever, white America had claimed rock & roll as their own by this point. Other than Jimi Hendrix (who even had to come to the UK to break it big), the big rock stars of the 1960’s are mainly white, despite the origins of the genre being rooted in African-American culture. What Funkadelic did was reclaim rock music for the African-American communities that invented the form, and they pushed boundaries and expectation with each subsequent album. They were as outrageous as Alice Cooper or The Stooges (see footage of Clinton taking to the stage wearing nothing but a white sheet that he intermittently lifted up, exposing his wang), as heavy as the MC5, musicians of Hendrix –level calibre, but as funky as James Brown or Sly Stone.

Despite the release of several singles as The Parliaments, it is here where the P. Funk mythology begins to take shape. The first two Funkadelic records – the self-titled debut and Free Your Mind…And Your Ass Will Follow (contender for greatest album title in history) – begins introducing the concept of The Funk being extra-terrestrial, which was most notably expanded on under the Parliament name many years later.

By the time they reached 1971’s Maggot Brain, Clinton’s vision was truly being perfected. 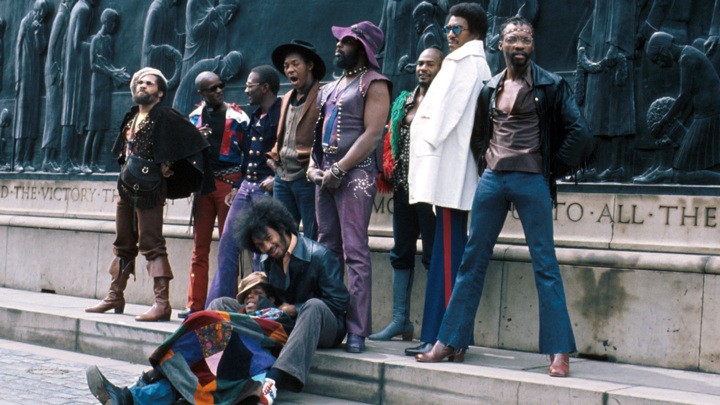 First of all, just take a look at that album cover at the top of the page. Maggot Brain probably has one of the more disturbing covers of it’s day, depicting a black woman buried up to her neck in dirt and screaming in agony. The back cover features the same woman’s head, completely decomposed, having become merely a skull. The sound and overall P. Funk message might have a lot in common with the hippy movement, but there’s also some dark shit at play here!

The centrepiece of the album was undoubtedly the opening title track. Beginning with the ominous monologue quoted at the top of the page, it proceeds to be totally minimalist and, crucially, instrumental. Guitarist Eddie Hazel leads the track in a single take, playing a solo that could match almost anything Jimi Hendrix ever played.

Under the influence of LSD, Clinton told Hazel to play as if he had just discovered his mother had died, then halfway through told him that he discovered that she is, in fact, alive. There is an entire story at play within the instrumental, one you can following your own mind’s eye. It remains a centrepiece to the band’s live shows to this day.

The title has come under much scrutiny. According to Rickey Vincent’s excellent book Funk: The Music, The People and The Rhythm of The One, the phrase Maggot Brain refers to Clinton finding his brother’s decomposed corpse in his apartment, whilst others say that Maggot Brain was merely Hazel’s nickname. Either way, one of the signs that it’s a truly great track is that the such myths surround it. It means it has captured people’s imaginations.

For such an high point to come so early on (and such a career defining one at that, as far as Hazel is concerned) you would be forgiven for believing that the rest of the record can’t live up to its explosive title track. But somehow, Funkadelic manage to keep the consistency running through the record like they never quite had before.

Stepping away from the groove for once, the first track with vocals is Can You Get To That, which is an acoustic rock-based ballad, intertwined with gospel-influenced vocals.  Very much a sign of the times, it’s all a bit hippy-dippy and anti-capitalist. However, it’s also a sound you could imagine Primal Scream making later on (which would also explain their collaboration with Clinton on their Funky Jam).

The Funk returns on Hit It and Quit It and provides a solo for keyboard wizard Bernie Worrell, whilst You and Your Folks, Me and My Folks is a fun tune, but contains lyrics that are rooted in serious subjects in regards to class and race. In fact, they are based in part on a rhyme in Thomas W. Talley’s 1922 publication Negro Folk Rhymes (Wise and Otherwise), important in African-American verse  as it was the first major study of black culture of its style; “If you an’ yo’ folks likes me an’ my folks/Lak me an’ my folks likes you an’ yo’ folks/You’s never seed folks since folks ‘as been folks/Like you an’ yo’ folks lak me an’ my folks”. More than anything, this clearly signals the importance that black history and black power had over Clinton and co, and foreshadows the afrofuturism that the P. Funk mythology would eventually become so closely associated with.

By far the heaviest track on the album is Super Stupid, a metallic KO that wouldn’t sound entirely out of place on a Black Sabbath album. It tells the story of a junkie on the hunt for drugs, and when he finally gets some, finds he has bought the wrong drugs (“Thought it was coke, but it was skag”). It is interesting to compare Clinton‘s use of imagery to describe urban life to his contemporaries. Of those who were dealing with similar subjects, such as Curtis Mayfield, Gil Scott-Heron or Marvin Gaye, none possessed the grit or humour of Funkadelic. It is difficult to imagine Gaye‘s What’s Goin’ On to featuring a song about an addict buying the wrong drugs, for example.

For the vast majority of this writer’s knowledge of the song’s existence, the lyrics had been completely irrelevant. The sheer power of Hazel’s guitar work and percussive vocals, married perfectly to Worrell’s psychedelic  keyboards and Tiki Fulwood’s funky drums made them almost irrelevant.  Funkadelic probably didn’t get this heavy again until the surprising nu metal of Dirty Queen from 2014’s First Ya Gotta Shake The Gate.

How much of Maggot Brain makes it into our P. Funk Top 10? Click here to find out.

It’s probably no surprise that the freak-out of Super Stupid was followed by a little ditty in the shape of Back In Our Minds, but even then the lead instrument appears to be a flexi-tone. It is the shortest and probably most disposable track on the album, but even in this instance the bizarre sound of it keeps you hooked for it’s 2 minutes 41 seconds.

Wars of Armageddon, the album’s closing track, is probably the most experimental, making heavy use of sound effects that could probably scare the shit out of you if were on a bad acid trip. The song doesn’t have many lyrics, and many of those present are incomprehensible. There is a lot of talk of freedom and power, and ends on the statement; “Look at that pollution! It’s a fat funky person!” Make of that what you will.

This would be the final Funkadelic album with the original line-up, with several members quitting (but occasionally returning), and most of the follow-up Funkadelic albums on the Westbound label failed to hit the mark that Maggot Brain did.

In fact, by the late 70s, Funkadelic itself was put on the back burner, as the huge commercial success of the more accessible Parliament took centre stage with masterpiece pure funk albums such as Mothership Connection and Funkentelechy Vs The Placebo Syndrome (personal favourite alert). Funkadelic were eventually re-started on a major label (Warner Bros) and scored the entire collective their most recognised hit; One Nation Under a Groove. By now, they were a much less rock-orientated group and fitted more in line with Parliament’s pure funk (though still undoubtedly the more experimental of the two).

But as great as these records were, they missed the bite of Maggot Brain. The pure LSD influenced freak-out may make it very much of its time, but it still expands and baffles your mind to this day.  Not that it matters particularly. Whether it’s the psych of Maggot Brain or the funk of Mothership Connection, just remember that the P. Funk mantra remains the same…