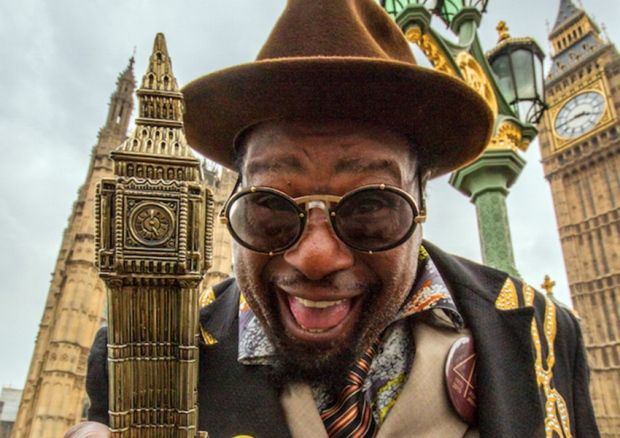 George Clinton at the OTHER Parliament

Following on from General Election “fever”, Getintothis’ Shaun Ponsonby takes a look at an entirely different kind of Parliament as they gear up for Glasto. We prefer this one, to be honest.

Now that the dust has settled on the twice-decade event in which we all go to the polling stations to decide which one out of a cluster of rich twats will govern us for the next five Zeus forsaken years, we have elected to celebrate a different, funkier Parliament.

This is a Parliafuckadelicment thang. P. Funk, uncut funk, The Bomb, and, deeper still, the Mothership Connection. The brainchild of one genius: George Clinton, the one man who links doo-wop to hip-hop and everything in between. About to take Glastonbury by storm with a special set titled The Mothership Returns: George Clinton, Parliament, Funkadelic & The Family Stone

The P. Funk dynasty began in a barber shop in New Jersey, where Clinton and his comrades formed a doo-wop group called The Parliaments, named after a brand of cigarettes. As time wore on, they tried to be a clean-cut vocal group, a la The Temptations, and Clinton even for a time served as a Motown staff songwriter (most notably, after he had left the stable, the Jackson 5 recorded one of his earlier songs, I’ll Bet You, on their third album).

However, the group were too funky to pull off The Temptations slickness, and after a notoriously abysmal appearance at the famed Apollo Theatre in Harlem, they decided to go in a different direction. Around this time, they also lost the rights to the name The Parliaments, so Clinton opted to push the backing band forward and christen them Funkadelic.

Funkadelic settled in Detroit were, with their new funky, psychedelic, hard rock sound they fit in perfectly with bands like The Stooges, MC5 and Alice Cooper. Attempting to reclaim rock music for the African-American communities that invented the form, they pushed boundaries and expectation with each subsequent album. Although signed to Westbound Records early on, commercially there were deemed “too white” for the black audience and “too black” for middle America.

When The Parliaments name was returned to Clinton in the mid-70s, Clinton signed the act to Casablanca Records alongside KISS and Donna Summer, and added former members of James Brown’s band to the fold, including funk legends Maceo Parker, Fred Wesley and, of course, Bootsy Collins. A string of mega-successful albums followed, including Mothership Connection, The Clones of Dr. Funkenstein and Funkentelechy Vs. The Placebo Syndrome.

Funkadelic also re-launched on Warner Bros. as a more experimental funk-oriented band, as opposed to a rock band, releasing their biggest album – and, arguably, the entire P. Funk mission statement – One Nation Under a Groove.

The entire movement culminated with the massive P. Funk Earth Tour, a legendary trek complete with the landing of the Mothership, from which Clinton would emerge as his Dr Funkenstein alter ego. The huge scale of the stadium show was the kind never before witnessed by a black audience, given the lack of funding black acts often received from label bosses. This naturally blew the doors open for the next generation of black artists, such as Prince and Michael Jackson, to push boundaries with their own stage shows.

However, the juggling was always going to catch up with the organisation eventually. By the early 1980s it had all fallen apart. Clinton signed to Columbia as a solo act (though his collaborators remained), achieving one major hit with Atomic Dog, one of the most sampled songs in history.

In fact, it’s the sampling that has kept P. Funk alive. Depending on where you get your information, Clinton is either the first or second most sampled artist in hip-hop, jostling for position with James Brown. Particularly the West Coast acts like Dr Dre and Snoop Dogg, who based much of their earliest and most celebrated material on P. Funk samples, while Clinton also collaborated with rock bands like Red Hot Chili Peppers, Primal Scream and Prince.

There has been very few people in popular music to have had the career Clinton has had, and it’s one that deserves the kind of renaissance that Nile Rodgers has received recently. But perhaps there’s too much for us to consume in one lifetime. Whittling this list down to just ten has been an arduous task, so in lieu of merely including key tracks and our favourite songs, we have instead tried to adequately cover the scope of this incredible legacy.

Starting with a more recent entry into the P. Funk canon, George Clinton’s granddaughter Satvia raps over an impossibly funky track that is reminiscent of a 70s Parliament groove. In an ode to a genus of flowering plants that includes three different species and are regularly smoked, Sativa (geddit?) matches the track for funkiness with prowess and precision. But, then, it’s hard not to feel a groove like that.

This comes from their second album Say Blow By Blow Backwards.

Yes, this is where we got the name for the column. But the song is actually much darker than the crap we waffle on about there would have you believe.

It is about an impoverished mother with five children who has resorted to prostitution in order to support her family. Although she shields her children from this, every night the narrator hears his mother beg for forgiveness and understanding for doing what she has done. It was a level of gritty realism and social commentary that P. Funk often had in their work, even though it was masked by silliness to make it digestible.

Reportedly, Clinton has compared himself to the song’s subject for having to do commercials for financial reasons after being repeatedly fucked over by people in the industry.

This replaced Parliament’s Flash Light at the top of the charts in 1978, which shows how successful Clinton’s empire had become by the latter half of the decade. In his recently published, brilliantly titled book, Brothas Be Yo Like George, Ain’t That Funkin’ Kinda Hard On You, Clinton professes that Bootsy had become the biggest star in the P. Funk universe, with his flamboyant personality and fashions. Even listening to his vocals, it’s pretty clear why that would be. It sounds like he’s merely spouting the first bit of nonsense that comes into his head, but he does so with so much charisma that it sounds like some sort of masterplan.

There were two P. Funk girl groups signed to different labels. One was Parlet, the other was the Brides of Funkenstein. The Brides were Dawn Silva and Lynn Mabry, fresh from a stint in latter day Sly & The Family Stone. Their debut album, from which Disco To Go is taken, won a number of awards on release and continues to be one of the favourite P. Funk off-shoot albums.

George Clinton and a few of the band members were driving around, listening to the radio, when David Bowie’s Fame came on the radio. Clinton turned to drummer Jerome Brailey and instructed him to “remember that beat”. He managed to do so, and they built the entire song around it.

This was the collective’s first million seller, and remains one of their most enduring classics. With that incredible chant, how could it not be? “We want the funk, give up the funk…”

This is the collective’s earliest hit, as the all-male vocal group The Parliaments, which became a Northern Soul classic in the UK. Compared to the majority of male vocal groups at the time, particularly the all-domineering Motown groups like The Four Tops and The Temptations, this is a pretty radical departure and absolutely sets up the genre-busting insanity that Clinton & Co would spend the next decade and a half pioneering.

When Clinton re-formed the group as Parliament in the 70s, they recorded a new, even funkier version of the track on the Up For The Downstroke album, when it became a hit all over again.

Legend has it that Clinton wound up at the studio off his cake one day and rambled these lyrics into the microphone and stumbled away, not returning for days. Guitarist/co-producer Gary Shider built the track around George’s ramblings, which George had no recollection of.

You know nearly all of this song even if you’ve never heard it. Snoop Dogg, 2Pac, Iggy Azalea, Bow Wow, even Clinton himself have all sampled this one. It is undoubtedly one of the most sampled songs in the history of hip-hop, and with good reason. Nearly everything on the song is unforgettable, and most people could make a great song out of just one of these elements.

Flash Light comes from what is arguably Parliament’s finest album, 1978’s Funktelechy Vs The Placebo syndrome, which introduces the main antagonist in the P. Funk universe, Sir Nose D’Voidoffunk, an unfunky pimp who refuses to dance. In Flash Light, Sir Nose is defeated by the power of The Funk. He can’t contain himself, he has to dance. A lesson to us all, as the song says; “most of all, you need The Funk!”

Amazingly, for something so funky, there’s actually no bass in the song. Anything that sounds like a bass is coming from keyboardist Bernie Worrell’s synthesiser. Worrell is one of the most important musical figures in the P. Funk collective and went on to play with Talking Heads, most notably in the Stop Making Sense concert movie alongside Bride of Funkenstein Lynn Mabry.

Maybe a controversial choice for the top spot, as it doesn’t represent the sheer FUNK that Clinton and his cohorts are best known for. But this is a genuinely breathtaking guitar solo from Funkadelic’s late Eddie Hazel. This writer would absolutely choose this performance over anything Hendrix played. There is an entire story in this instrumental piece.

Clinton supposedly told Hazel to play as if he just found out his mother had died, and he responded by launching into this incredibly emotive solo. At some point, the feel changes. This is because Clinton told him to play as if she had just woken up.

The performance was so powerful that Clinton removed nearly all of the other instruments. So, all you get is this awe-inspiring guitar solo.

Furthermore, the bizarre imagery of the spoken word section at the top of the track adds to its swirling dream-like atmosphere.

This remains a staple of Parliament-Funkadelic’s live shows, often after a heavy jam when everyone needs a breather. It remains a highlight and never fails to put you in a trance.