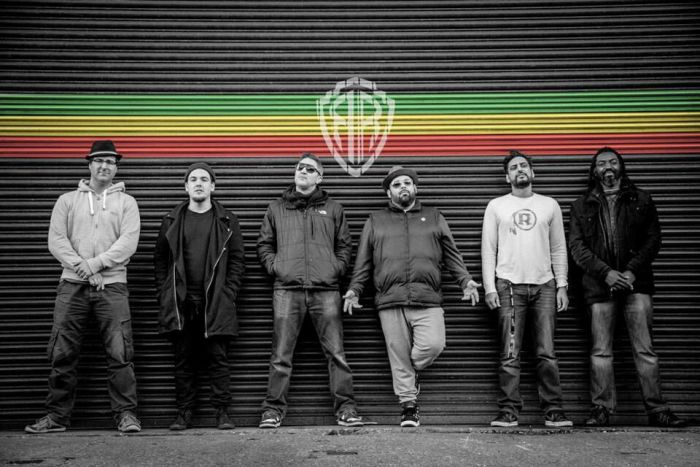 Putting a reggae twist on classic Prince with new venture Radio Riddler, Come Find Yourself turning twenty and a Fun Lovin’ tour, Getintothis’ Chris Bradley gets the full lowdown from fast talking Brian Leiser.
Fun Lovin’ Fast talks about remaking the iconic Purple Rain album with Jamaican sounds and Come Find Yourself turning 20.
When publicity-shy Prince was interviewed by MTV in 1985 and asked if he knew Purple Rain was going to be so big, he hissed: “See this cufflink? Give a brother a break. I don’t know.”
Over the past few years, Fast (real name Brian Leiser) has been trying to contact the reclusive icon about his latest album with new band Radio Riddler – a reggae remake of the classic 80s album.
But cryptic-loving Prince has always protected his eccentric right to privacy in his life and work.
“He’s a hard man to reach,” claims Fast, who started his new group with Fun Lovin’ Criminals drum maestro Frank Benbini, friends and guest singers, like Ali Campbell, Deborah Bonham (sister of Led Zeppelin’s late John) and Beverley Knight.
Purple Reggae is quite a departure from the Criminals’ sound and the infused funk of Fast’s solo Unreleased Instrumentals but making the transition from Prince’s synth-funk to the sound of Jamaica was a smooth one.
Brooklyn native Fast, who now lives in London, began djing shortly after Purple Rain was released. He had taught himself piano at an early age, played handbells in church and by 12 was playing Depeche Mode and Vangelis on a synthesiser.
By the time he was 18 he had a sampler and started on his successful road to becoming a composer and chart-topping musician, selling in excess of four million records with the Fun Lovin’ Criminals.
Turning arguably Prince’s best work into a reggae album could have failed in less accomplished hands. Fast said:  “We were surprised how well Prince’s music translated into reggae. Frank and I are big reggae/dub fans.”
“We have remixed many groups in a reggae style and decided we should do a full length album like the Easy Star All-Stars have done [with Pink Floyd’s Dark Side of the Moon].
“Frank is a huge Prince fan, so we chose Purple Rain, and there is no denying the soundtrack is an amazing album of his songwriting and production.”
In just one month the production was complete on Purple Reggae. But it took Fast and Frank three years to bring their network of friends together to record vocals on tracks like Let’s Go Crazy, I Would Die 4 U and, of course, Purple Rain featuring UB40s’ Campbell.
“It was tough to get them all in the studio with their busy schedules,” said Fast, who enjoyed winning a new legion of fans taking Purple Reggae on a UK tour supporting UB40 late last year.

“One of the many highlights was our collaboration with Ali Campbell who has supported the album for many years now. He is such a legend in the reggae scene and we are so honoured he sang the track. We had many ideas for who should sing the songs but the singers we ended up with were perfect for the tracks.”
“The fans are loving the album and the people who have seen the show with the live band vibe our righteous sounds. Our gigs with UB40 have been so much fun.“
“On many of the shows we were fortunate to have our live band with us, which is how we prefer to perform compared to live PA gigs. With the full band we can let the music wander into dub territory.”
Purple Reggae was mixed by Tim Latham ISP, who has worked with artists from A Tribe Called Quest, Neneh Cherry, D’Angelo, Ol’ Dirty Bastard, Erykah Badu to Britney Spears.

The reason for reuniting with Latham was simple, Fast says: “He is an enigma. He has worked with so many influential artists and always impresses us with his skills.”
“He is our Irish Saint and a true friend. His knowledge of sound recording and placement of instruments/vocals in the mix is unparalleled in the industry. “
Since the release of the Fun Lovin’ Criminals rollicking eclectic debut Come Find Yourself, Fast’s original band has had three drummers and seven studio albums.
The last, Classic Fantastic, was released in 2010 independently by the band shortly before Fun Live and Criminal, a three CD live album crowdfunded by fans on Pledge.com.
Back in 1996, when the first album was released, the trio – Huey Morgan, Fast and Steve Borgovini, the original drummer – were the bad boys of EMI Chrysalis, who were scouted performing in the notorious Limelight in New York where they worked.
The relationship lasted until the third studio album Loco in 2001 – the same year Pop Idol gave the world a taste of TV talent shows and record companies a clear idea of what music the masses wants to buy – after which they were dropped by the label.
Over the years, FLC have maintained a loyal fanbase while Huey has gone on to become a darling of the BBC, the three continue to make music together and are a favourite on the summer festival circuit across Europe.
For Fast, he is grateful for the exposure 20 years ago but laments the ‘mystery’ of discovering new music in record shops far and wide because it is all online as the music industry continues to grapple with piracy and popularity, often blind siding talent.
“When I was growing up you would hear new music in clubs or on the radio and would have to search for it at record stores, often travelling many miles to obtain a record, cassette or CD” Fast explains, “Record labels supported artists and many people invested their time to promote music. Today, everything is accessible on the internet, often before the time and money has been spent to promote it.”
“With limited budgets and big corporations monopolising the airtime, it is sad to see the ‘mystery’ of discovering new music basically disappear. Great, new, original music is out there if you can sift through the bullshit to find it!“
“FLC were very fortunate to get signed with EMI at a time when major labels still had power and endless radio/tv opportunities were available for us to promote our music. This helped us to tour the world several times and gain a loyal following of like-minded music lovers.
“Our fans are the only reason we have been able to still do what we love and for that we will always be grateful.“

FLC have just announced a 20th anniversary tour for 2016, starting in the UK/Europe in February: “We will be performing Come Find Yourself in its entirety as well as other favourite FLC jams and will be touring throughout the summer/fall, performing on every continent.”
So for Fast – who earned his nickname because of the speed at which he talks – it has been a rewarding career so far: “I’m 20 years older, 20 years wiser and I have no regrets,” he said.
Radio Riddler are are touring the US with UB40 later in the year and are looking for a booking agent for UK gigs.