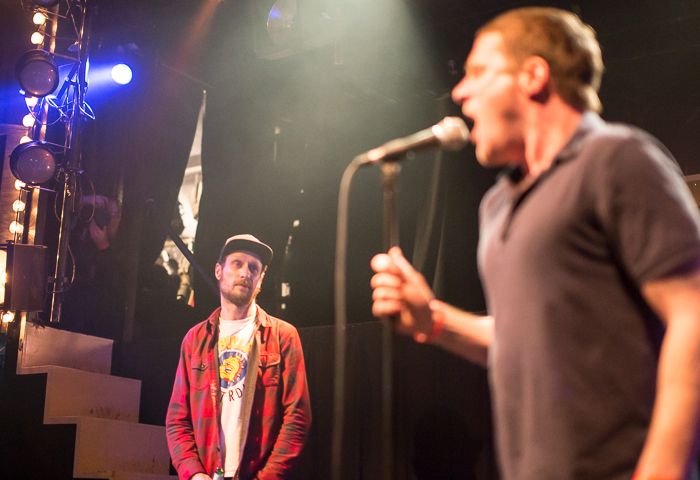 Embracing a punk ethic for 21st century Britain, Sleaford Mods follow up their Sound City appearance with an October date at the Mountford Hall; Getintothis’ Del Pike is here to tell you more.

Midland establishment botherers Sleaford Mods are not content to bring their unique brand of bawling diatribes to Liverpool just the once with their Sound City 2016 appearance, but have announced a winter return to Mountford Hall on October 28. Jason Williamson (vocals) and Andrew Fearn (sounds) have been around a while now but are still discovering new audiences as they tour the country.

With a sound finding the middleground between a British Public Enemy and The Fall, they are made all the more appealing by their stripped down approach to performance; Williamson armed only with a mic, backed by Fearn armed with a laptop, a chair and a bottle of lager. Their beat heavy songs paint a bleak picture of the cities that we live in, but humour lurks within Williamson’s direct, staccato phrases.

The duo followed up their acclaimed 2014 debut Divide and Exit with the equally vitriolic Key Markets last year. Their must-see film, Invisible Britain, screened as part of FACT’s Doc n Roll season last Christmas saw the Mods playing across a handful of troubled cities, juxtaposing their hard hitting lyrics with the individual plights of each community (Toxteth Riots in Liverpool, Miners’ Strike in Barnsley) and following their reception at each venue.

The comparatively-small Mountford Hall should offer more natural surroundings for the uncompromising pair who enjoy confrontation with their audience. Certainly one of Britain’s most exciting live acts at the moment, this is definitely going to be one of the hot tickets as the dark nights draw in.