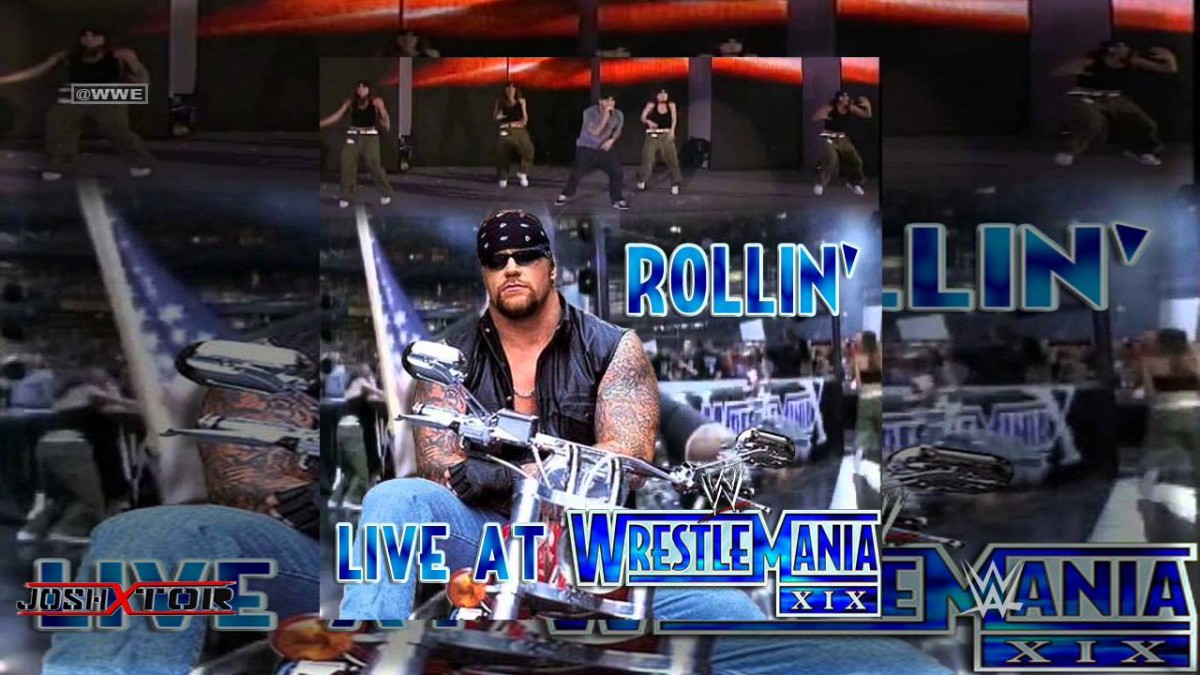 Limp Bizkit and The Undertaker at Wrestlemania 19 – credit YouTube

As the WWE Universe basks in a successful stint at Download Festival 2016 Getintothis’ Jay King evaluates the ongoing relationship between wrestling and music.

When we were younger we used to drape a sheet over our living room door and pretend we were our favourite wrestlers entering Madison Square Garden.

We’d drag our parents down to Woolworths to buy the latest WWF (as it will always be to us) soundtrack CD’s, load them into our family hi-fi system and give each other the signal through our makeshift backstage curtain before making our grand entrances and doing obsessively rehearsed impressions of all our most loved attitude era stars before inevitably it would all ended in tears after a particularly unforgiving Walls of Jericho or a top rope (sofa) elbow drop, or worse, our horrified mother walking in to find us telling each other to suck it before we really knew what ‘it’ was.

If you were a wrestling kid, which we’re willing to bet a lot of you were and still might be, then even today it’s hard to hear the sudden shattering of glass or being asked “Can you smellllll” without cracking a little smile. Wrestling and music has maintained a strong, if not strange, relationship over the years, now we’re here to count down the best music moments in wrestling.. CAN YA DIG IT?

Musicians have been popping up in the biz since long before our (and probably your) time. Ozzy Osbourne appeared at Wrestlemania 2.

Alice Cooper had a brief spell managing Jake ‘The Snake’ Roberts ahead of his bout against the Honky Tonk Man at Wrestlemania 3. Ray Charles and Aretha Franklin have both sang at their respective Mania’s as have Gladys Knight and Little Richard, but nothing’s quite as mad as Cyndi Lauper kicking ass and taking names in one of the weirdest Piper’s Pit’s of all time. And that’s saying something.

Bahahahah! Do we even need to add anything further? Probably not, but that does seem a tad lazy. In an effort to pull out all the stops for the ’87 Slammy Awards, the almighty wrestling overlord that is Vincent Kennedy McMahon Jr decided the best way to do this was to don a sharp suit, grab a few ladies and serenade his way though Stand Back, with a little help from the Hulkster of course. And Brother are we glad he did!

In 2013 80’s politically and personal charged metal/funk fusion band Living Colour gave then WWE Champion CM Punk a rock star welcome to Wrestlemania 29. At the time Punk was one of the the most ‘over’ stars of the brand and everywhere his theme song was heard, controversy followed.

Snoop Dogg has popped up in WWE multiple times throughout the years. With four Wrestlemania’s under his belt (including a Master of Ceremonies role for ‘Bunnymania’) and multiple other TV appearances over the years, the weekend of Wrestlemania 32 saw him, for some inexplicable reason, inducted into the 2016 WWE Hall of Fame. As part of his commitments it did mean we got to see him walk to the ring in a robe and slippers at this years spectacular… so worth it obviously. Relive his best moments with this video.

6. The Deadman and Johnny Cash – Wrestlemania 27

Not a live performance but this earns its place in our Top 10 just for the sheer marriage of perfection between the Undertakers character and the hauntingly eerie vibe created when he made his Wrestlemania entrance to Johnny Cash’s Ain’t No Grave. There must have been high fives around the office the day this was pitched. One of the greatest entrances ever and why the Undertaker is still the highlight of Mania each and every year.

In a twist of circumstances ECW legend Steve Corino took the action directly to Limp Bizkit where he interrupted them on stage in Illinois to protest about the ‘immoral’ behavior. Claiming he’d rather see “good bands” like “Carly Simon and The Bee Gees“. The totally in no way planned or scripted event took a turn for the worse for poor Steve as unknown to him he wasn’t the only extreme wrestler in the house and went home bloodied and bruised. Still, not everyone ends up on MTV News.

That’s right. Megadeth played Nitro. Often swept under the rug (it’s not exactly their greatest performance) the heavy metal icons were on hand to give the WCW faithful a performance of Crush Em’ straight off the soundtrack of the then new Universal Soldier: The Return. At the end of the song Nitro superstar Goldberg appears from a cloud of smoke to make his surprise return after a taking a six month break to film….you guessed it, Universal Soldier. See, it does make sense.

OK, so stay with us. Towards the end of the 90’s Eric Bischoff saw fit to strike a deal with KISS to create a KISS-themed wrestler, The Demon. The big idea was to create a stable The Warriors of KISS, with each band member having a wrestler double. Needless to say it didn’t work out. Here KISS give him the greatest debut entrance of all time.

Metal has always gone hand in hand with wrestling, exactly why WWE decided to set up camp at Download Festival this year, following in the footsteps of UK promotions who have experienced great success there in past years. Triple H and Lemmy go back a long way, with the WWE COO sporting Motörhead logo’s throughout his career, speaking at Lemmy’s memorial service and receiving Download Festival’s first ever Spirit of Lemmy Award on the main stage this year. After recording the song in 2002 especially for HHH’s entrance theme Motörhead famously performed at both Wrestlemania 17 and 21, giving us two of the most memorable entrances of all time as well as the most credible, unlike many of the other entries, there’s no gimmick’s when it comes to Motörhead.

Got a taste for more? Well word on the dirt sheets is that the mysterious Spanish Announce Team are currently preparing to return from a grueling tour of Parts Unknown just in time to perform live on the night of SummerSlam (August 21) at an earth-shattering event somewhere in the UK, so keep a sharp eye, Brotha.