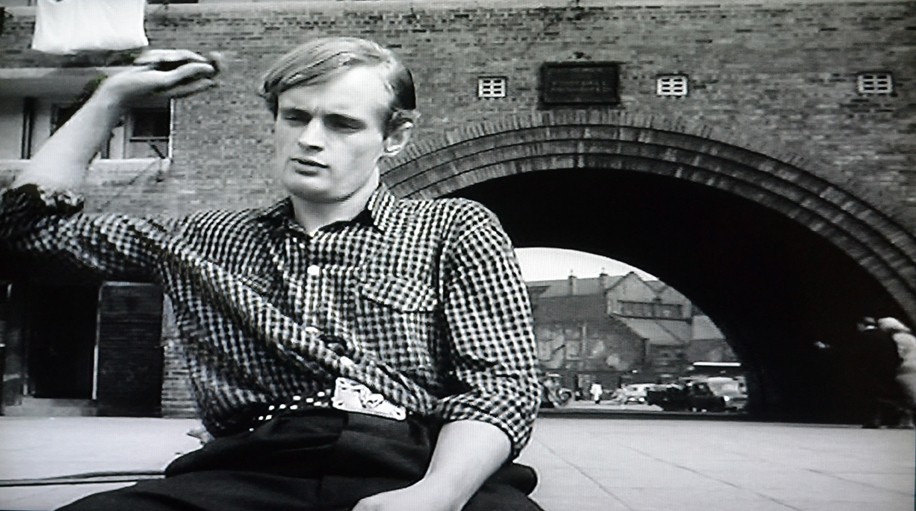 In the second of our series of features on Liverpool in film, Getintothis’ Del Pike travels way back to 1958 for a slice of Scouse Exploitation with the forgotten classic Violent Playground.

Liverpool 1958, It won’t be long before the city becomes a major cog in the world of music and culture. The influences however are all around. The Cavern is still a jazz club and the influences of Elvis and the new Rock and Roll are in the vicinity, via crackly radio broadcasts and sailors flowing in from New York. The city already has a rich Jamaican culture and a thriving Chinese community, and the Irish influence is strong. It was a City of Culture way before 2008.

Along with music, teen movies were another hugely important gift from America and were a lot more accessible. Rock around the clock (1956), incredibly tame by today’s standards, had already caused uproar with the tubby and not entirely attractive Bill Haley causing teenagers to rip up the seats at their local Roxy. James Dean’s Rebel without a Cause (1955) and the glut of cheapo exploitation movies of the time were also causing concern from parents in fear of their little darlings becoming rebellious too soon. The garish posters of the exploitation movies showed savage youths tearing into each other and busty girls with blouses ripped open and the shortest of skirts, enticing youths into murky cinemas. In retrospect, It is surprising that there wasn’t more of a trend for such movies on this side of the pond, the post war attitude of defiance certainly lent itself to the mind-set of late 50s youth.

Veteran Brit director Basil Dearden had already made his name in 1949 co-directing the Portmanteau horror, Dead of Night, famous for its creepy ventriloquist dummy sequence that still manages to chill. His foray into exploitation style thrillers can be seen in 1950s The Blue Lamp, a police caper starring Jack Warner that would later be the foundation for the BBC TV series Dixon of Dock Green. Further thrillers like Pool of London and Cage of Gold would establish Dearden as an auteur of grimy underworld tales, interspersed with classic comedies like The Smallest show in Earth with Peter Sellers, itself a homage to cinema.

In the Summer of ’57 when Dearden arrived in Liverpool to start work on his latest slice of Brit Exploitation for the Rank Organisation, he brought with him a genuinely big name in British cinema and caused quite a stir. It wasn’t every day you saw Stanley Baker patrolling Gerard Gardens. Baker who had also starred in Pool of London was a bear of a man. His rich Welsh burr had served him well in 1957s implausibly entertaining Hell Drivers and Dearden evidently saw potential in casting him as a jaded copper, put on Juvenile liaison duty against his will in Violent Playground. Det Sgt Jack Truman is not entirely likeable at first with his blatant dislike of the kids under his watch but as with most movies of this type, once the romance kicks in we warm to him.

The film is obviously influenced by Richard Brookes’ 1955 success Blackboard Jungle which saw Glenn Ford as a struggling teacher trying to control his juvenile delinquent students. This is a film that deals with race issues against a rock n Roll soundtrack and this is where Dearden takes his cue. It is mere minutes into the film until derogatory comments are made about the Black community and this continues throughout along with similar jibes towards the Chinese. Immigration was a political hot potato back then and this is evident throughout the film. When a small black boy is seen jiving along the road, Truman asks him why he can’t just walk. “Mister” replies the boy,”kids don’t walk no more – they roll.” A ‘comical’ conversation about wife walloping follows which adds further to the film’s dated aspect.

The Rock n Roll is limited to the repeated outing of Play Rough by Johnny Luck, a derivative piece that tries hard to summon up the angst and glamour of American exploitation soundtracks. The song’s composer Philip Green, fills the rest of the movie with a fairly inoffensive score, typical of Brit movies of that era.

All interior shots in the film were taken at Pinewood studios as were much of the exteriors but there are key Liverpool locations running throughout. As with many Liverpool movies, including Letter to Brezhnev (1985) and Waterfront (1950) the opening titles feature the iconic Mersey and the Liver buildings before the action moves further inland. Shots of typically working class kids playing around terraces and tenements dominate the sequence that culminates in a shot of the almost completed Anglican Cathedral towering over a bombsite.Truman’s investigations into small time theft by the local nippers puts him back on the trail of the firefly arsonist, the case we see him relieved of at the start of the film. His investigations take him to Gerard Gardens, home of Johnny Murphy played by David McCallum, later to find fame in TVs The Man from U.N.C.L.E and Sapphire and Steele. Thankfully his acting had improved greatly by then.

Catch up on Liverpool at the Movies #1: Letter to Brezhnev

Gerard Gardens, designed by Sir Lancelot Keay were built on Liverpool’s Little Italy area in 1935, at the City end of Scotland Road, today if you look around the back of The World Museum and across the road you can still see some grassy areas where the estate used to stand. The tenements were demolished in 1987 to make way for access roads to the Kingsway tunnel, but they did not go down without a fight. Residents fought tooth and nail to save their homes but it was to no avail. At the time of the filming of Violent Playground, these homes were seen as unusually palatial for community housing with electricity, coal fires and baths and the film was criticised for making them appear to be more in the traditional mode of slum dwellings for delinquents.

Gerard Gardens hold a special place in the hearts of locals who look back on this particular housing project as a leading light in the fight for comfortable living and community spirit. Families who had been moved out of the estate were relocated to areas lacking that quality and there is still bitterness in that decision. The estate is well shot in the film with some beautiful wide shots and low angle shots that lend a further grandeur to the majestic terraces. Prior to the demolition of Gerard Gardens, the BBC TV production, Coast to Coast starring Lenny Henry and Pete Postlethwaite was filmed there. This much loved one off drama featuring Henry as a Soul DJ featured a plethora of key Liverpool locations and is considered by many to be one of his finest moments. So rich with Motown classics is the soundtrack it has prevented the film from gaining a DVD release to this day. Thank God for Youtube.

Liverpool filmmaker Paul Sudbury’s Gardens of Stone received its premiere at FACT in 2005 and is a detailed account of the iconic estate. In a shot from 1987, just prior to demolition, graffiti is shown reading “Violent Playground 30 years on”.

Further north of Gerard Gardens where Scotland Road turns into Stanley Road, Bootle, once stood the imposing structure that was Stanley Hospital. Now a residential block the brown stone hospital wall is all that remains. Truman’s love interest / Johnny’s sister Catherine, played by Anne Heywood can be seen jumping a bus outside the hospital, closely followed by Truman himself.  The scene has hardly changed with the tall imposing buildings of Stanley Road still largely intact and the bus stop still in the same spot. The scenes from the bus window appear to be a continuation of Stanley Road but the church where Catherine gets off is St Mary’s Church in Paddington. It is disappointing that so many of the key locations are actually shot in London, including the school despite the name Scotland Road School above the entrance.

There are still enough Liverpool locations to spot however; in a sequence where Johnny leaps from a hotel window, the action takes place on School Lane. The window is on the first floor at the back of what is now Primark, facing the Bluecoat and has not changed. You can clearly see down School Lane towards what is now Liverpool One.

There is an exciting chase sequence prior to this that takes in much of the City centre, notably the Queensway Tunnel, predating its similar inclusion in Harry Potter and the Deathly Hallows in 2009 and Fast and Furious 6 in 2013. Another sequence involving a laundry van also shows Casson’s Temperence Hotel, 19 Lord Nelson Street. This row of buildings fell into disrepair in later years but have now been returned to their former glory running up towards the back of Lime Street Station from London Road. It is fascinating to see how the City has changed when watching films from this era. We see Catherine walking past Central Station on Ranleigh Street, which was at that point a traditional Station building rather than the modern underground design we see today and we also see Truman accompanying a child across the desolate post-war decay of the area around Byrom Street.

One of the major criticisms of the film lies in the fact that there is barely a genuine Liverpool accent to be heard. Other stars of the film such as Peter Cushing as the do-gooding priest and a young Melvyn Hayes (It Aint Half Hot Mum) don’t even come close. The one true Scouser in the film is the child actor Freddie Fowell, later Freddie Starr. His acting is dreadful unfortunately, not helped by the script that demands he shouts “Johnny” every other word.

Violent Playground is a film that is fondly remembered by many as a snapshot of life around the City that is still picking up the pieces after the Blitz a decade earlier. It also serves as well as a record of the birth of the teenager, reflecting sharply what Colin MacInnes was writing about in Absolute Beginners. Its exploitation style promises do not always deliver and what remains is a tame story of mild delinquency that goes a little too far for one disaffected individual. Like most exploitation movies there is a moral message and it is bluntly delivered in stagey set ups of gang war councils and general menace towards the Chinese characters with the eventual punishment duly delivered. Whilst the tone of the film is dated, there is a direct line between Violent Playground and more contemporary films like Kidulthood and Ill Manors.

It is interesting to note that whilst the film was made as a homage to the tough teen movies coming over from America it failed to catch on in The States until The Beatles drew attention to the city later on, only then did the film find American interest and was bizarrely released as a Beatles cash in.

Violent Playground is available to buy through ITV DVD and is a worthwhile watch if only for a glimpse of post war Liverpool and 1950s Southern attitudes towards the North.

Reel Stories, the Liverpool on film exhibition at The Museum of Liverpool continues until the end of September.