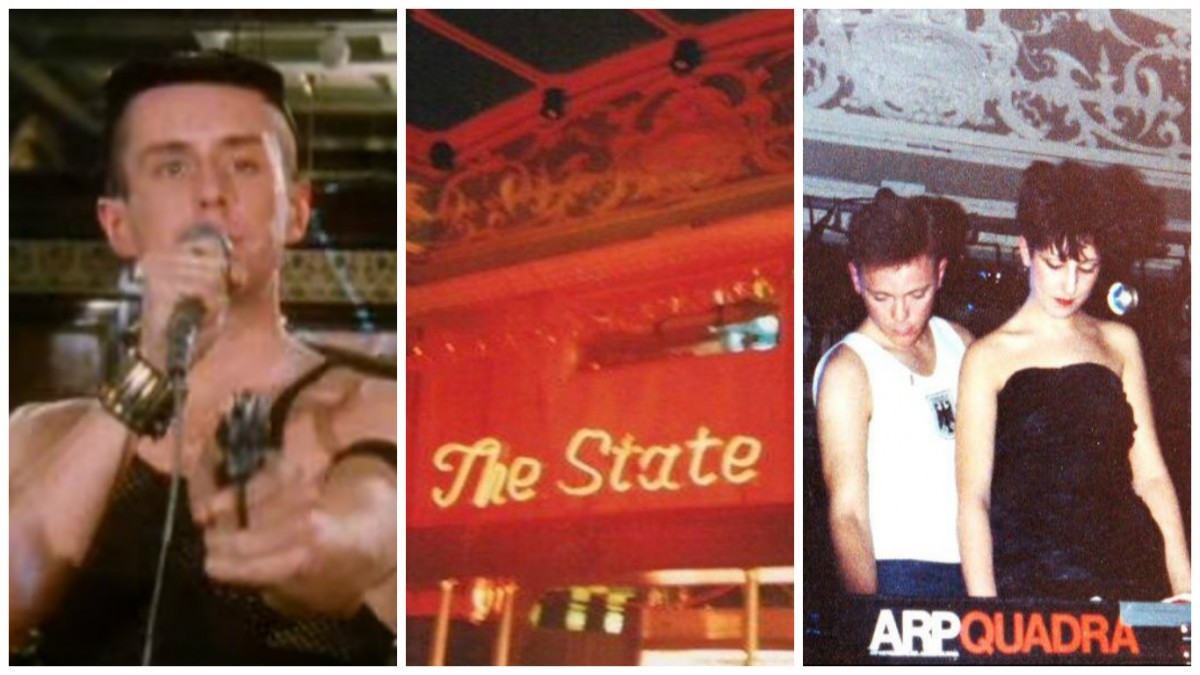 Holly Johnson (left) and New Order (right) at The State

The State Ballroom started life as a restaurant in 1905, later being used for tea dances, a wonderful phrase which evokes old world elegance by its mere mention. It is an Art Nouveau masterpiece, featuring Grecian columns, marble floors, wall carvings and toilets to make even the Philharmonic’s famous loos weep with envy.

Littlewoods took over in 1949, first as a restaurant and then for a very grand social centre for their staff. Eventually this fell away and the company then used it as what was surely the world’s most luxurious storage space.

It wasn’t until the 80s that The State was reopened as a nightclub, when Frank Cookson played ‘alternative dance’ Thursday – Saturday, with each night drawing their own crowd.  As DJ Mike Knowler says “Our audience knew which night they belonged to“.  Mike, along with Frank and, later, Andy Caroll and Steve Proctor span the tunes that kept the dancefloor jumping. The best and danciest post punk and early electro provided an unlikely soundtrack to the club’s old world décor and the new light show enabled the State to lay claim to being Liverpool’s first laser disco.

Around this time, Planet X, The System, MacMillan’s and The State were all vying for a similar crowd and Liverpool’s alternative crowd were spoiled for choice. It was possible to have wild weekends with The State on Thursday, the Planet or Macs on the Friday and finish things off nicely with a Saturday night at The System.

This itself was a fairly unusual state of affairs, as in my immediate social circle there seemed to be very little club loyalty at the time. Whereas in other clubbing periods, people could define themselves by which club they attended (Cream and Eric’s being two prime examples), the mid 80s saw a kind of ‘polyclubbing’ scene in Liverpool, with punters choosing where to spend their hard earned wages.  That said, The State did indeed have a crowd of loyal regulars, as their Facebook page and reunion nights can testify.

One masterstroke The State pulled was charging only a single penny to get in, reasonably assuming that they would make money on the bar. This proved difficult to resist and the club was regularly sold out and the dancefloor packed.  Another was to allow people to book a party at The State, where the person making the booking would be given 100 free tickets and a bottle of champagne.

The State’s potent brand of cider, sold in 1 litre bottles, became the stuff of legend, being (if hazy memory serves) over 8% proof. A few of those and dancefloor abandon would ensue. Drunken chats and new best friends became a regular occurrence. 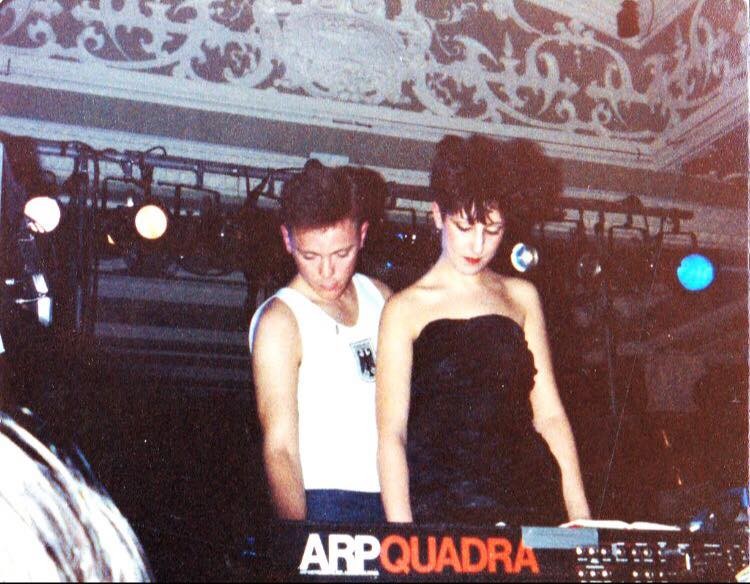 Gigs also featured at The State, notably two of the first gigs by New Order, supported by James. These gigs caught New Order at their most truculent, refusing to do anything as rockist as encores or talking to the crowd. These gigs nevertheless showed them at an early peak, finding their way out of Joy Division’s shadow by playing their excellent debut album Movement, a favourite among hardcore New Order fans.

Promoter Steve Proctor had booked the band for one night and sold 1400 tickets for the 1500 capacity gig. Unfortunately, the police reduced the capacity to 800 shortly before the gig. Magnificently, New Order responded by offering to play two gigs over two successive nights, each containing 800 fans.

From The Beastie Boys’ riot to forgotten festivals and beyond, check out Getintothis‘ look at the Mersey’s bygone times in Lost Liverpool.

Sigue Sigue Sputnik also put on a memorable show at The State. Leader Tony James, for reasons that one must assume made sense to him at the time, decreed that SSS roadies had to be blonde, female and at least 6 feet tall in heels, which they were to wear during their roadie duties.  Yes, sometimes the 80s seem like a foreign land, they did things differently there. Other memorable but perhaps less outrageous gigs included Big Audio Dynamite and local lads The Farm.

The State’s place in Liverpool legend was cemented when 80s new music programme The Tube was filmed there as part of a feature on the Liverpool music scene. For this, a nascent and leather clad Frankie Goes to Hollywood were filmed at The State performing Relax. Producer Trevor Horn caught the performance, quickly signed them to his ZTT label and Relax went on to become the 6th best selling single of all time in the UK.

The State was also at the forefront of the late 80s Acid House scene, when Mike Knowler and Andy Carroll  picked up on the emerging dance scene and provided Daisy, Liverpool’s first Acid House night.  All this seemed a smooth transition from the extended club mixes the pair played from the likes of Francois Kervorkian and Arthur Baker, along with early hip hop selections from the likes of The Beastie Boys, Eric B and Rakim, L L Cool J and Stetsasonic .

Visits to the New Music Seminar in New York resulted in new tunes being brought back to the UK to be played in The State.  Mike went as early as 1986, with Andy following two years later, meaning Liverpool and The State benefited from early exposure to the new Acid House scene then still developing.  Andy Carroll recalled ”I went to some amazing club nights, met some great people, when I got back home I couldn’t wait to get back in The State to play some of the tunes I’d bought”. Around this time James Barton was experiencing the club scene in Amsterdam. “Suddenly all that ‘House music’ we’d been playing came together and soon after James got back to Liverpool the ‘Daisy’ night was born. Liverpool had gone Acid ‘ouse mad” .

Daisy ran for a couple of months on Monday nights until the Acid House fever completely took over most of the programming every night until the club closed in November 1989.  Mondays also featured a Gay Night, running for 6 months in 1986, with DJs and promoters from The Bell in London.

Resident Andy Carroll says “The State was Liverpool’s best kept secret . We had no Tony Wilson /TV and media connected owner involved , just a group of major music enthusiasts who were fortunate to be brought together .Before House music The Hac could be a bit hit n miss unlike The State which was booming every night it was open . Not wishing to take anything away from the legend that is The Hacienda , in mine and many other State Acid House regular’s opinion ,our club mostly had a much better atmosphere than The Hac did, but only we knew it ” 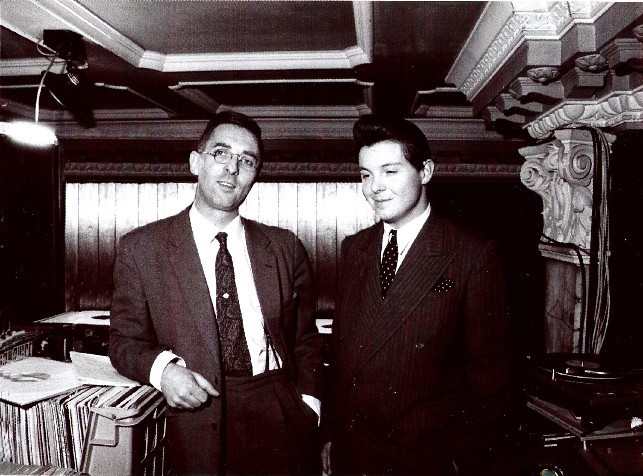 Mike Knowler and Andy Carrol – dapper in the DJ booth

The State reopened in 1990, hosting Garlands and various other nights. Rumours have abounded about The State’s future, one particularly popular one, and one that may yet prove true, being that it will reopen as a casino.

These days, there are regular State reunion evenings (and a busy Facebook page) where people still meet, talk and dance the night away as if the intervening years had never happened. Although these days aching knees and sore backs may have replaced hangovers and comedowns the following day.

It is difficult to call these reunions nostalgia, as that word conjures up a rose tinted, pipe & slippers picture of hazy reverie and these nights are anything but. Hands in the air abandon and non-stop dancing are still the main activities and the 80s crowd still know how to party.

The State‘s decor has always attracted film crews and every once in a while it is transformed into a set. It was used extensively for the 1985 film Letter to Brezhnev. and recently as a nightclub in Peaky Blinders.

In the meantime, Lee Butler’s passion for The State means that it still functions as a nightclub to the present day.