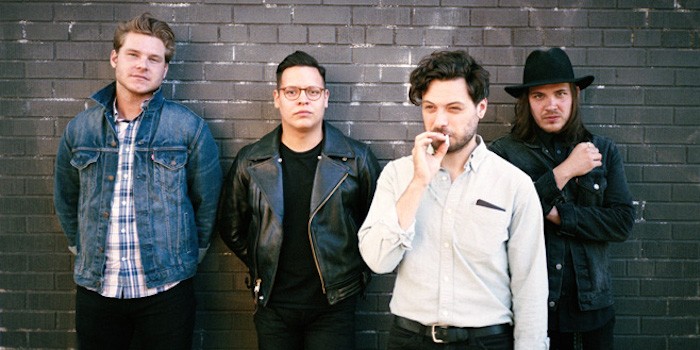 With the likes of Single Mothers, Black Girls and Asian Babes using gendered terms to mask their masculinity, Getintothis’ Stephanie Phillips investigates the effect it is having on women in music.

There’s an unspoken problem that all male bands face; how to stand out from the billion and one other all male bands. When you think about it can you really tell one bunch of sad looking guys in a shoegaze band from another? Aren’t Alt-J just Foals with a different haircut? Why do Thom Yorke and Chris Martin have the same interchangeably dull looking face?

Let’s face it, men are dry and said dryness has led to a trend amongst the more progressive end of indie and punk that involves finding new ways to be more than just ‘white men’. Some bands seek out female members to make them look diverse, some try on a different culture or style; blending in a half-arsed attempt at bhangra after a particularly enthralling trip to India. There are many ways to not come across as too stale, male and pale while still enjoying the benefits of said maleness and paleness.

Recently, all male bands have solved this problem by feminising their band names. Each year, music fans have the unenviable job of deciphering the reasons bands chose name such as Single Mothers, Black Girls and Asian Babes (Asian Babes actually do have one female member but we included them because it’s still such an awful name).

It would be ahistorical to claim that only men use feminine band names. There has been a long history of women, the queer community and people of colour using previously derogatory names to empower themselves and their art.

Julia Downes, editor of Women Make Noise: Girl Bands from Motown to Modern, explains: “In my experience of researching queer and feminist music and all-girl bands, many radical creators take up marginalised terms, e.g. The Slits, Kinky, Vag Halen, to reclaim and talk back to power; acts that can carry substantial risk to the safety of radical women and queers (you only have to think of recollections of the attempted stabbing of Ari Up from The Slits) as well as being ignored by the wider order.”

As Julia explains, when marginalised groups use marginalised terms to define themselves, their chosen names take on another form entirely. The names these acts choose are necessary for both the artist and the audience to self identify with and find strength in.

As Julia states: “The symbolic power of these acts have been incredible to creating a radical imaginary that many queers, feminists and people of colour use to survive.”

There are certainly numerous reasons why an artist will choose a name. DJ Gregg Michael Gillis (aka Girl Talk) has given various explanations for his nom de plume over the years but in an interview with FMLY in 2009, Gillis stated: “The whole point of choosing the name early on was basically to just stir things up a little within the small scene I was operating from. I came from a more experimental background and there were some very overly serious, borderline academic type electronic musicians. I wanted to pick a name that they would be embarrassed to play with. You know Girl Talk sounded exactly the opposite of a man playing a laptop, so that’s what I chose.”

For Gillis it seems one explanation for his pseudonym is that it became the perfect mask for him. Since there were too many bros to tell each other apart in his scene Gillis appropriated what he could of an identity that was apparently rare at the time, femininity. For Gillis, Girl Talk is a name he knew would rile his peers because, obviously, girl is dumb, girl is silly, girl has no place amongst the serious male DJs.

Who you callin’ a bitch? Does Feminism have a place in hip hop?

Glaswegian based electronic music producer Samuel Long also had the same idea as Girl Talk and decided to operate under the pseudonym SOPHIE hiding behind slickly produced tracks with 80s female R&B vocals. SOPHIE’s is a strange case on it’s own but even more depressing when you realise, as Grimes pointed out in her interview with the Guardian, how messed up it is to take praise for being a female producer when there are so few female producers out there.

Women and queers have obviously always been involved in the music scene but they generally find it harder to get the same recognition that men do. One only has to look at the numerous callouts of festivals with overwhelmingly male line ups to know this is true. Could the feminine name trend be another way for male bands to celebrate their sisters and align themselves with femininity?

Cassie Agbehenu, bassist in the Cheltenham-based band Fight Rosa Fight, is not convinced by that argument: “I genuinely think that these bands have chosen the names to look daring … Like, OMG that [band]chose a female centric name, they’re so wild! They dared to ‘read’ as a girl band but they’re actually men, how progressive!!! But it’s not progressive at all … it’s irritating.”

In this discussion we also have to think about the intersection of race and gender. UK-based band Slaves have been praised for their bovver-boy esque punk and their latest release Are You Satisfied? was named Mercury Prize album of the year in 2015. Despite the praise they have received, the band have also been courting controversy; Slaves are in fact two white men from Kent. Since white men have historically never been systematically enslaved, the group’s name has been questioned more and more as they grow in popularity.

The band responded to the controversy on their facebook page, stating: “Our name and music is aimed at being a slave to day-to-day life and routine, it is a metaphorical use of the word.”

Slaves aren’t the only band to court controversy with a racially offensive name. Indie rockers Black Girls recently formed a new project called Rikki Shay after questions around their name would not die down.

For both Slaves and Black Girls it is unlikely they aimed to offend but they certainly wanted to stand out. Though Slaves claim they are ‘slaves’ to the mundane routines of everyday life they are in fact not slaves in any sense of the word. We must remember that even though you might be stuck in your social media loving, 30-something, middle class, liberal-lite bubble elsewhere in the world, slavery still exists. People are not free, the struggle continues and I’m not talking about the fact that you think a 9-5 job is crap and that you want fully automated luxury communism to kick in ASAP so you can eat caviar on a beach in Mauritius in peace.

Those aren’t struggles, just things white people like to moan about to make them feel like their life is somewhat interesting. I highly doubt that any member of these bands would swap lives with a black person if given the chance therefore they shouldn’t profit from black people’s names or history. The issue that brings everything together really is privilege.

So you’re in an all male band and you wanna call yourself Grrrlz Time, Deep Vagina, Ratchet Grrrls or whatever tickles your fancy, ok that’s cool, but what does that name say about you and your beliefs? In an industry where women are questioned whenever they mention anything to do with the fact that they are (shock, horror) women, the idea of men deciding it’s fine for them to use the name Girls’ Volleyball Team or whatever just doesn’t sit right.

As Cassie explains, all male bands using feminine names is another example of a ”double standard that allows men to use something that is usually derogatory to women and come under no fire whatsoever.”

Punk should be about dismantling the status quo, upsetting the balance and making the, as bell hooks would say, ‘white supremacist capitalist patriarchy’ shiver with fear. Surprisingly enough an all male band calling themselves Girl’s Boobs won’t do that. It doesn’t even come close. As Julia explains, all male bands using feminine names is a “privileged practice where the powerful get to play with the symbolic resistance of the powerless to depoliticise and profit from it.”

When it comes to marginalised and feminine names they are there for a reason. Women looking for a space in the music scene wanted Girl Band to be their idols. Young black girls who get attacked from every angle society can get them wanted Black Girls to be the group they could look up to, but they didn’t get that at all did they.

The most positive approach these bands could take is to centre women and people of colour; our voices and our stories. They could bring more women on stage with them and make a point to talk about feminism in interviews. If they wanted us there we would be there but I’m not sure they do.

Julia has no answer to why all male bands do this but she knows where it will take us: “Usually when there’s a lull in the music industry they bring in a repetitive year of ‘women in rock’ where they allow a few token women in. Now it seems that they can do this without women at all.”