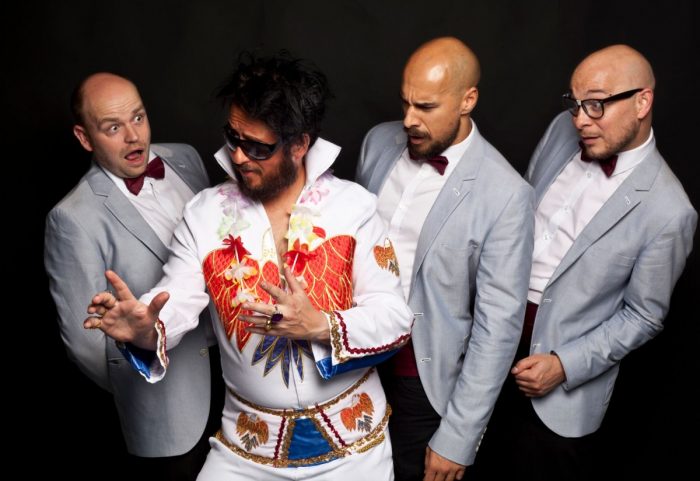 The King is back in town – Elvana

Elvana are the new Elvis / Nirvana tribute act everyone is talking about – honestly- and Getintothis’ Jonny Seven found the perfect burger joint to catch up with them and ask Danny Cobain what the Rockin’ Hell is going on.

Penny Royalty? The King is back – The band you never knew you needed in your life but definitely do! Let us introduce Elvana.

Ok, so you’ve probably heard similar hype before but when you mix two of the most seminal acts in music history how can you go wrong?

We caught up with Elvana – the world’s foremost (and only?) Elvis fronted Nirvana tribute act for a chin wag in an undisclosed burger bar ahead of their upcoming UK tour. A tour which conveniently takes in the Arts Club on October 1.

We started with a cheeky joke question and it soon became clear that Elvana are a band with their tongues set firmly in their cheeks.

Is it true you all met at a tribute bands convention in Vegas? “It was a fervent prayer that we would. We went there hoping to find an Elvis but the ones we met had either never heard of Nirvana or simply couldn’t shake rattle and roll hard enough.”

When we asked, how long have you all known each other? And how did you meet? The answer was just as unlikely. “We all got in a knife fight over an unclaimed Cheeseburger at a popular fast food outlet.  We were officially introduced to one another in the holding cell.  True story.” Really?

Elvana are certainly a band who are creating a dream and then living it, we asked how the band was formed, “Well sir, after our time together at the Judge’s pleasure, about two years ago it was, we were sitting on our ranch in Disgraceland discussing how best to rock out and rule the world after we’d finished all the bourbon and ranch pickle. We love Elvis. We love Nirvana. It’s something we said we would all wanna go and see and hear if we weren’t doing it. Fortunately no one else was and I now happened to know Elvis which, you know, helps.”

Elvana are totting up their appearances now touring the length and breadth of the country and have been met with vastly differing reactions as a recent tour poster boasts, “This is actually my worst fucking nightmare come true” and “What a bag of shit!” (Both five Stars!!!) – Mixed messages there.

“We’ve shake, rattled and rolled shit up at venues all over the UK, places as exotic and far reaching as Newcastle upon Tyne City, Carlisleshire and some place in the sticks called London.  We’re as excited as a rabbit on the first day of mating season for the tour and we’ve been doing live music long enough to say we’ve loved every town we’ve played in.”

We asked – Do you have a set play list? “Obviously it’s predominantly Nirvana. We grunge up a number of Elvis Aaron Presley’s finest moments and mix them in here and there.  We don’t have a set playlist really as we’ve learned it’s impossible to collectively remember things like the orders we play songs in and only two of us can read.

“Bobby Grohl and I turn up, dust off our chops and rock so hard we make the walls wet!  Then about an hour and a half later Elvis and our bass player Dr Doom show up.  We then spend about 45 minutes trying to figure out how to get the rest of the equipment to work before tearing through a number of songs and playing around with ideas.  We rotate towel and water boy duties for Elvis between the three of us at rehearsals.”

Then their story turns a little sinister – “We had to fire the last towel boy after an un-named band member caught an STI from one of the towels.  We’re on the lookout for a replacement.  Any interested guys or gals should get in touch but according to state law we are obligated to inform you that … you know what, forget about it.”

Getintothis: What’s your ultimate direction for your band? Are you seeking fame and fortune? Can you handle it?

“Well sir, our current direction is to tour where we can and take our freakshow of love for the music of Nirvana and Elvis Presley where we can.  We were supposed to headline the Reading Festival this year but that’s the weekend Elvis’ solid gold toilet is getting re-enforced so, you know, we had to pass on that one.  We’re touring the UK in September and October and it’s gonna be real swell y’all!

“Can we handle it?  We keep our feet on the ground and our head out of the clouds by consuming outrageously overpriced pastry goods and burgers of any description.  We keep our emotional health in check with a healthy balance of alcohol, gun shooting and sending untraceable death threats to our ex-wives …and their lawyers.  We don’t wanna end up going crazy now.”

As we wipe the ketchup from our greedy lips we ask, (so you don’t have to) – What’s the best way for any would be Elvana fans to follow your work? I’ve noticed you are pretty active on Instagram and Facebook

“If they could send a large stamped address envelope to: Elvana, 123 Disgraceland St, Disgraceland then every full moon we’ll send out a printed full colour sheet detailing what has been and will be going on in the crazy world of Elvana!  We’ll also include a free vial of Elvis sweat and will have a regular column detailing how Dr Doom is recovering from his towel related STI … Or, if you really wanna, because the Colonel tells me it is apparently more convenient for people, there’s some thing called Facebuck on that innernet thing as well as Youlube, Twatter & Instantgrams.  We’re on all those things apparently.”

As they are about to officially leave the building they add “You should come check it out!  Or wait for the next Elvis Fronted Nirvana Tribute to come to your town.”