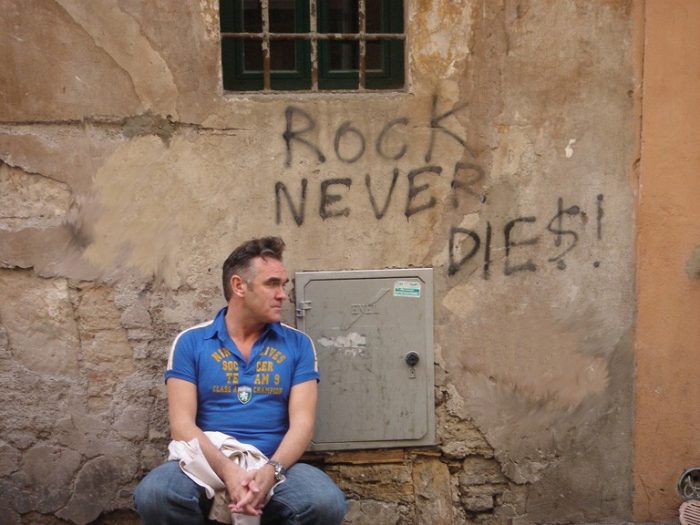 Morrissey has announced a one off gig in his hometown, the only date this year, Getintothis’ Del Pike assesses what he’s been up to for the last few years and eagerly awaits his return.

With a last minute Morrissey live show announced for his home town of Manchester this month (Aug 20) the be-quiffed one’s fan base must surely be going bonkers. With just one date announced for the whole year this is going to be a must see event for true Moz-philes across the country.

It’s been a bizarre few years in the life of Steven Patrick Morrissey, gone are the heady days of rapid fire releases as the cult singer has taken to the literary world and put the brakes somewhat on his music career. With multiple illnesses including a cancer scare in 2014, “If I die, then I die. And if I don’t, then I don’t”, Morrissey has not let his political views slip and has presented two tomes of work that have been met with vastly conflicting responses.

His long awaited Autobiography in 2013, controversially published as a Penguin Modern Classic, offered a poetic account of the singer’s first half century but didn’t quite reveal enough, spending too little time on The Smiths as a band and too much time on The Smiths as a law suit. Extensive coverage of the Royalties case between the singer songwriter Smiths and the drum and bass Smiths could only lead to mass page skipping across the land. Definitely a case of Stop Me If You Think You’ve Heard This One Before.

2015’s List of the Lost, beautifully bound in a classic orange Penguin sleeve also split fans right down the middle. A weird Stephen King style horror was not what we expected from the man who wrote Meat is Murder, although in hindsight it makes some kind of sense. If Morrissey had controlled the urge to climb on his soap box every other chapter and tell the story straight it may have fared better, but it read more like a manifesto than a novel.

See what we thought of Morrissey’s debut novel

2014’s World Peace is None of Your Business, his first solo release in five years, was luckily a triumph. A celebration of flamenco guitars lightening the load of Morrissey’s tales of dead bullfighters, domestic abuse and academic staircase tumbling. Wholly more satisfying than his previous overblown Years of Refusal.

Morrissey has a bee in his bonnet however and seems intent on trawling past releases and tweaking them to his middle aged liking, more often than not these are pointless exercises, simply changing the cover of Kill Uncle or chopping down the glorious Late Night Maudlin Street on his solo debut Viva Hate. This from the man who bemoaned “Re-issue, re-package, re-package, Re-evaluate the songs” as an attack against the music industry on The Smiths’ Paint a Vulgar Picture.

When Morrissey is at the top his game he is untouchable and by that we mean bothering the establishment with his barbed lyrics (new material please!!!) or wowing his hometown with a one off gig. See his Who Put the M in Manchester live DVD if you don’t believe us. Absolutely electric.

Morrissey will be playing his only gig this year at the Manchester Arena on Aug 20, tickets are still available.